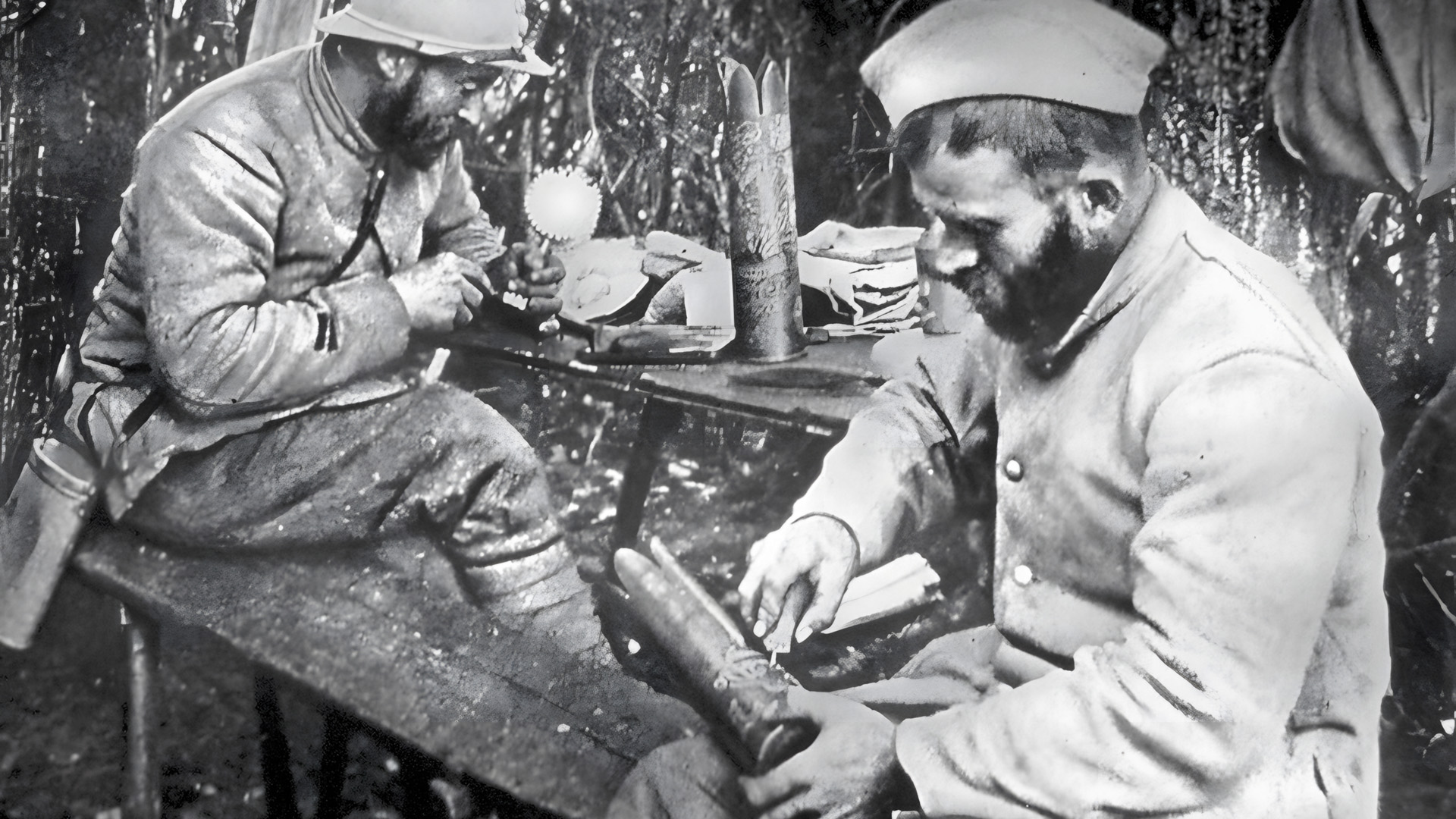 Trench art includes not only soldier-made items, but also commercially produced items made as keepsakes from famous wars.

Art is in the eye of the beholder, of course, but for those who collect militaria there is a special kind of art that requires a special kind of appreciation. That would be trench art. Although many might also contend that they don’t know art but they know what they like, trench art is certainly something that many collectors do indeed like and appreciate.

The name “trench art” seems to associate this particular category of militaria exclusively with those artifacts made in the trenches during World War I. While creation of such items may have flourished in the trenches, especially as soldiers may have had access to limited materials but often endless stretches of time to kill, the category is much more vast.

One truly cannot say when trench art began, but it is likely that soldiers were carving rocks and wood figures as long as there were campaigns. Such items would certainly fall under the broad category of trench art, but the modern version really dates just to the past 200 years.

“As you say, it will go back as long as there have been armies, but really it is only recognized from the Napoleonic era onward,” says James Gordon-Cumming, a collector of modern trench art.

However, much of what was made and survived likely wasn’t produced by those on campaign.

“Napoleonic-period trench art is almost exclusively POW work, either in bone or colored straw, thus the magnificent ships, houses, and guillotine scenes in bone, or boxes covered inside and out with images made from woven, dyed straw,” says Gordon-Cumming.

It was during the conflicts of the 19th century that this art form was truly born, and in some ways this makes sense as it follows the Age of Enlightenment, which promoted a greater emphasis on learning, while art and music became more widespread. The skills of the average soldier were also greater and allowed for more artistic creations.

This was notable in conflicts such as the Crimean War, which also was the first time that such items weren’t just personal keepsakes for the soldiers themselves. Some of it was made by locals postwar for sale to tourists and included pieces of shot put together as desk ornaments and paperweights. But it was items created a few years later during the Franco-Prussian War that were likely the first to be marketed to the growing middle class. Similar items were made from shot from the siege of Paris, says Gordon-Cumming. It would be the final conflict of the 19th century, and arguably one of the first truly modern wars that saw widespread use of trench art in its most recognized form.

“Only when you get to the Boer War in 1899 do you start to get brass shell casings, which form the bulk of trench art going forward,” says Gordon-Cumming. “The Boer War also generated a lot of POW work from the large camps in Ceylon, St. Helena, and Bermuda—mainly carved wooden items.”

It was, of course, during World War I that the term “trench art” was likely coined, but here too there is much confusion. While there is no denying that many items were made by the soldiers in the trenches, who as noted did have spare time, the truth is that many of the highly crafted shell casings and other impressive metal working weren’t easily done in the horrid conditions that the soldiers endured.

World War I had all the ingredients for the explosion of trench art. It was fought on a massive scale, had a massive amount of ordnance, but also had a long-term postwar pilgrimage business. For many soldiers, especially those from the United States, it was unlikely that without the war they would have gone to distant lands as tourists, so when they returned home they sought to take many souvenirs. As soon as the guns fell quiet, a cottage industry likely produced many of the items.

Thus it is easy to see that trench art could fall into four main categories. The first, of course, is soldier-made items. There are tales of soldiers making lead casts in the clay flooring of the trenches, and there are more complex items including rings and wood or simple stone carvings. The second type was made by POWs and other internees. In some cases, this art consisted of items that were made and exchanged for wood or money.

But two other categories exist: civilian-made and commercially made. While both are still arguably trench art, many items were made to sell to the soldiers returning home, not by the soldiers themselves. This created that aforementioned cottage industry, and most collectors today understand that these items were beyond what soldiers in true trench conditions could accomplish.

“If it’s a shell from World War I, 95 percent were made by civilians and sold to the soldiers as a souvenir to take home,” says collector Travis Stevens. “I’m not a huge fan of these mass-produced items.”

“The quality of the items produced at the end of the war in Europe was very good,” says Stevens. “Other items included stockpiles of German canteens that were engraved and painted and made available for sale to American soldiers. These would be engraved and painted with a nice scene relative to the area and even personalized to a specific soldier.”

As more soldiers looked to acquire the items, the enterprise turned from small scale to a level of commercialization. The irony is that the commercialization also changed the way that many items were crafted. While shell casings were later customized in subsequent wars, many of those don’t have that same level of artistic quality as those from World War I.

“With World War II, things died down,” says Gordon-Cumming. “Industrial mechanization meant fewer people worked with their hands, so fewer people were capable of making the sort of trench art popularized by French craftsmen during World War I.”

The other reason World War II lacked the artistic items of World War I was that a war of movement meant far fewer periods of inactivity to fill, and no large buildups of detritus to be pilfered by the locals. There were exceptions, of course, and a lot of trench art came out of the Pacific Theater.

“One area of trench art that most collectors forget is the Pacific Theater in World War II,” says Stevens. “My grandfather was a guard for POWs on Okinawa, and they would make soldiers bracelets out of the wrecked [Japanese] aircraft. My grandfather also had a solid aluminum ring with a sunburst carved in it and filled with red plastic, which he told us was melted plastic from the Zeros on the island.”

While some metal trench art was made, as surviving examples attest, by the end of the war it was not to the level that had been produced a generation earlier. Additionally, unlike a generation earlier, soldiers returned home with other items and didn’t seem as interested in shell casings and other personalized trench art.

That didn’t mean that trench art died. Gordon-Cumming says that the Korean and Vietnam conflicts, both of which had periods of inactivity, saw a resurgence with iconic items such as “Huey from a Coke can.” In the 1990s the trench art movement picked up again. Metal workers in Sarajevo even now continue to collect shell casings from the hills around the city to sell to tourists.

Whether these newly made items fit into the bigger category of trench art depends on the individual collector. The bigger issue is ensuring that period items are actually from the period. While many World War I-era items may have been created postwar, those shell casings or other artifacts are from the era. What collectors need to watch for are later items sold as if from another period.

“I have seen someone selling bullet shell art and marketing it as original World War II, yet there are 25 of the same item, and it was made out of .223,” says Stevens. Clearly, shell casings from a postwar AR-15/M-16 couldn’t be considered World War II-era trench art.

However, the more complicated the art the less likely it is to be faked, says Gordon-Cumming.

“A big advantage of collecting trench art is that it is so labor intensive to produce it is currently not worthwhile trying to fake the ‘proper’ stuff,” he says. “Fakes at the moment are limited to plain shell cases with cap badges welded to them and copper drive bands beaten out to make paper knives. These are easily distinguishable from period ones by the lack of patina on the copper and their simplicity in manufacture.”

“I’ve been collecting for about seven years, and trench art is so common that there is really no need to fake it,” says Nicholas Kumburis, who was drawn to the hobby by the interesting yet odd items.

However, in the years to come, especially if prices rise, there may be more incentive for fakers to make better items, but most collectors agree that we are not there yet. There is an additional protection too, notably the limited supply of period shell cases, which would have to be used to make new pieces—at least of the proper caliber. As with all militaria, the key is buying from reputable dealers and making a close inspection of the piece before buying.

“Basic awareness of history and military artifacts in general is important to begin with when dealing with fakes,” says Larry Stewart, a collector of World War I trench art who likes the link it provides to the time, even if not a particular individual.

Trench art often contains clues hidden in the details of the piece, he says. For example, a shell vase usually has manufacture dates and country of origin information stamped on the bottom of the shell. Other clues might be what is engraved or carved into the surface of the piece, such as dates, geographical locations, and famous battles.

For this reason, trench art doesn’t even need to be a specialized collection but can be something small or big that accents one’s larger collection of period items. It may even be something that the history buff with no militaria could appreciate as well.

“It can be far better to wait until you find a nice piece, with a place name embossed, a scene of victory, a soldier, or beautiful woman and yes, pay a bit more, but get something worth keeping,” he says. “If space is a premium, try collecting just 37mm shell case trench art. Alternatively, just collect paper knives, but [online auctions] have opened up the world of trench art and there is a very active trading scene there.”

“There are no good or bad pieces of trench art, as it all depends on the collector,” says Kumburis. “The thing about trench art is that it tells a story about the person who made it because each piece has its own flair, and no two pieces are exactly the same.”