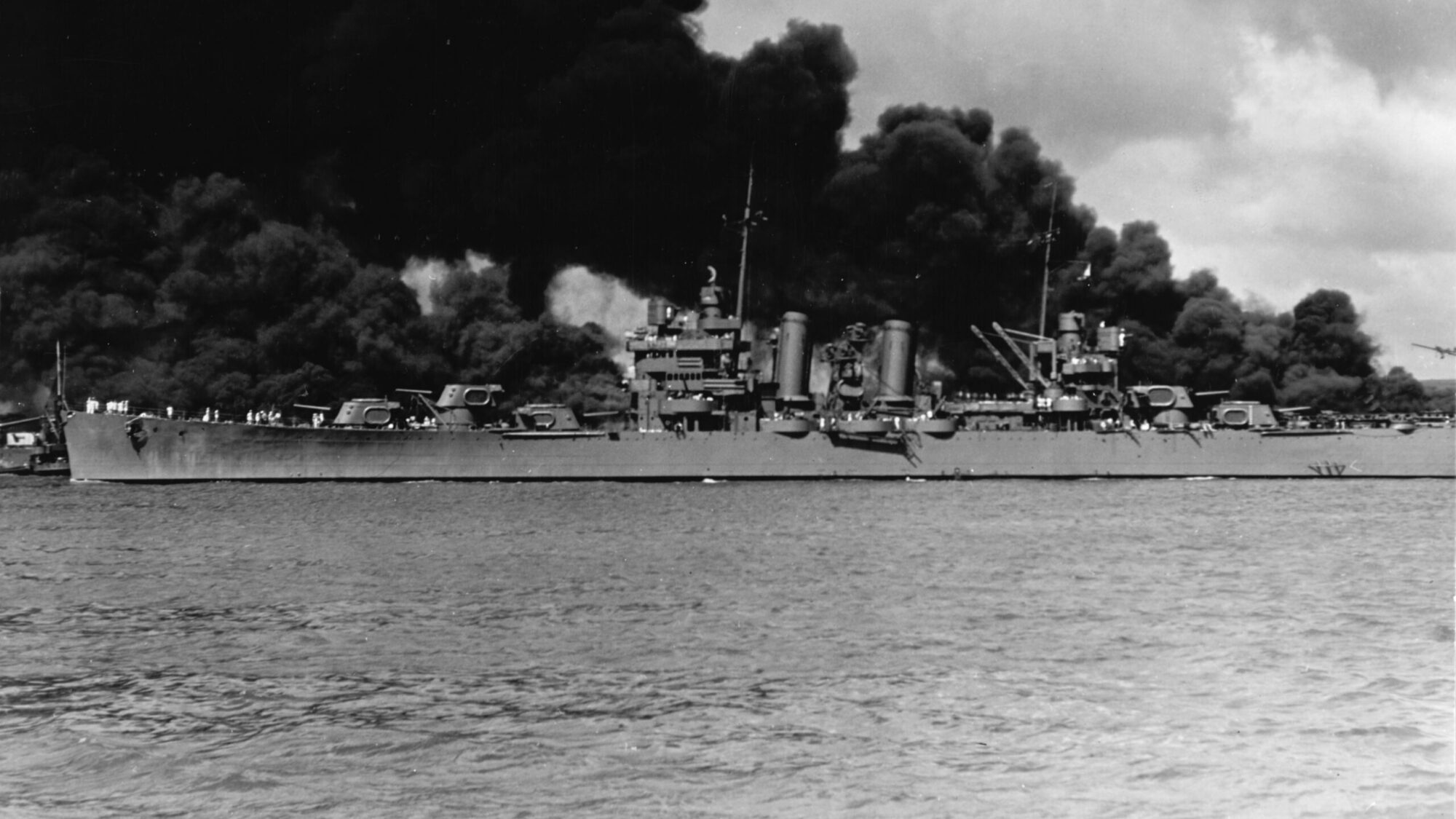 The Saga of the USS Phoenix

This article appears in: September 2012

On Sunday morning, December 7, 1941, the Brooklyn-class light cruiser USS Phoenix lay at anchor southeast of Ford Island in the supposed safety of Pearl Harbor. Just before 8 am local time, that peace was shattered by the sudden attack of Japanese carrier planes that devastated the U.S. Pacific Fleet.

Miraculously, Phoenix did not suffer as much as a scratch during the attack, and by midday she was in company with other warships, searching fruitlessly for the enemy task force that had inflicted such serious damage without warning. At the time of the attack, the 10,000-ton light cruiser was one of the Navy’s newer vessels, laid down in the spring of 1935, launched in March 1938, and commissioned that October. She was fast, with a top speed of 33.6 knots, or 38.7 miles per hour, and her armament consisted of a formidable main battery of 15 6-inch naval rifles complemented by eight 5-inch guns, and numerous antiaircraft weapons. In the interwar years, Phoenix had served in the Atlantic, visiting ports in the Caribbean and South America.

Following the attack on Pearl Harbor, Phoenix seemed to lead a charmed life. The cruiser operated in the South Pacific and the Indian Ocean, escaping damage while escorting the aircraft carrier USS Langley to Java. Langley was sunk by Japanese aircraft. Phoenix performed further escort duties with Task Force 44 in the South Pacific and was ordered to return to the United States for a badly needed refit prior to transporting Secretary of State Cordell Hull to Casablanca in 1943.

Assigned to the 7th Fleet, Phoenix returned to the South Pacific and provided fire support to the U.S. landings on the Japanese-held island of New Britain and later took General Douglas MacArthur aboard during the operation to capture the island of Los Negros in the Admiralty Group in early 1944. Throughout the spring, Phoenix fired her guns in support of Allied troops in the Admiralties. Off the coast of the island of Biak, two salvoes from the cruiser’s 5-inch guns silenced a troublesome Japanese battery that had damaged a pair of U.S. destroyers.

A close call off the northwest coast of New Guinea on June 4, 1944, resulted in bomb fragments killing one sailor and wounding four others aboard Phoenix, and hours later the cruiser fought off a nocturnal attack by Japanese torpedo planes.

At the Battle of Leyte Gulf, Phoenix patrolled Surigao Strait with several U.S. Navy battleships that had been grievously wounded at Pearl Harbor, raised from the mud and refitted. In the darkness of October 25, 1944, these battleships and the veteran Phoenix exacted a measure of revenge. Blocking the advance of a Japanese task force intent on attacking the U.S. landing beaches on the Philippine island of Leyte, the U.S. warships under Admiral Jesse Oldendorf decimated the enemy. Phoenix found the range against the Japanese battleship Yamashiro and pounded the larger vessel. Heavy American gunfire sent Yamashiro to the bottom in 27 minutes.

During further operations in the Philippines, Phoenix dodged kamikaze attacks and torpedoes fired from a Japanese midget submarine and provided fire support for land operations. When Japan surrendered, the cruiser was en route to Pearl Harbor for another refit.

On July 3, 1946, the light cruiser Phoenix was decommissioned. Five years later, in April 1951, she was sold to Argentina and recommissioned in the Argentine Navy as ARA 17 de Octobre. Later, the cruiser was renamed General Belgrano in honor of the founding father of the Argentine nation.

Thirty-one years after the cruiser was acquired by Argentina, in the spring of 1982, a dispute over the sovereignty of the Falkland Islands in the South Atlantic erupted in war between Argentina and Great Britain. On May 2, the British submarine HMS Conqueror was patrolling an exclusion zone that had been declared by the Royal Navy to protect its landing and supply operations against Argentine forces in the Falklands. At 3:57 pm, Conqueror fired three torpedoes at the venerable cruiser. Two struck home, and the old warrior slid beneath the waves. A total of 323 Argentine personnel were killed.

It was a somewhat ignominious end for such a survivor, but with the sinking the former USS Phoenix did attain one more notable distinction. General Belgrano remains the only warship ever sunk during wartime by a nuclear-powered submarine.