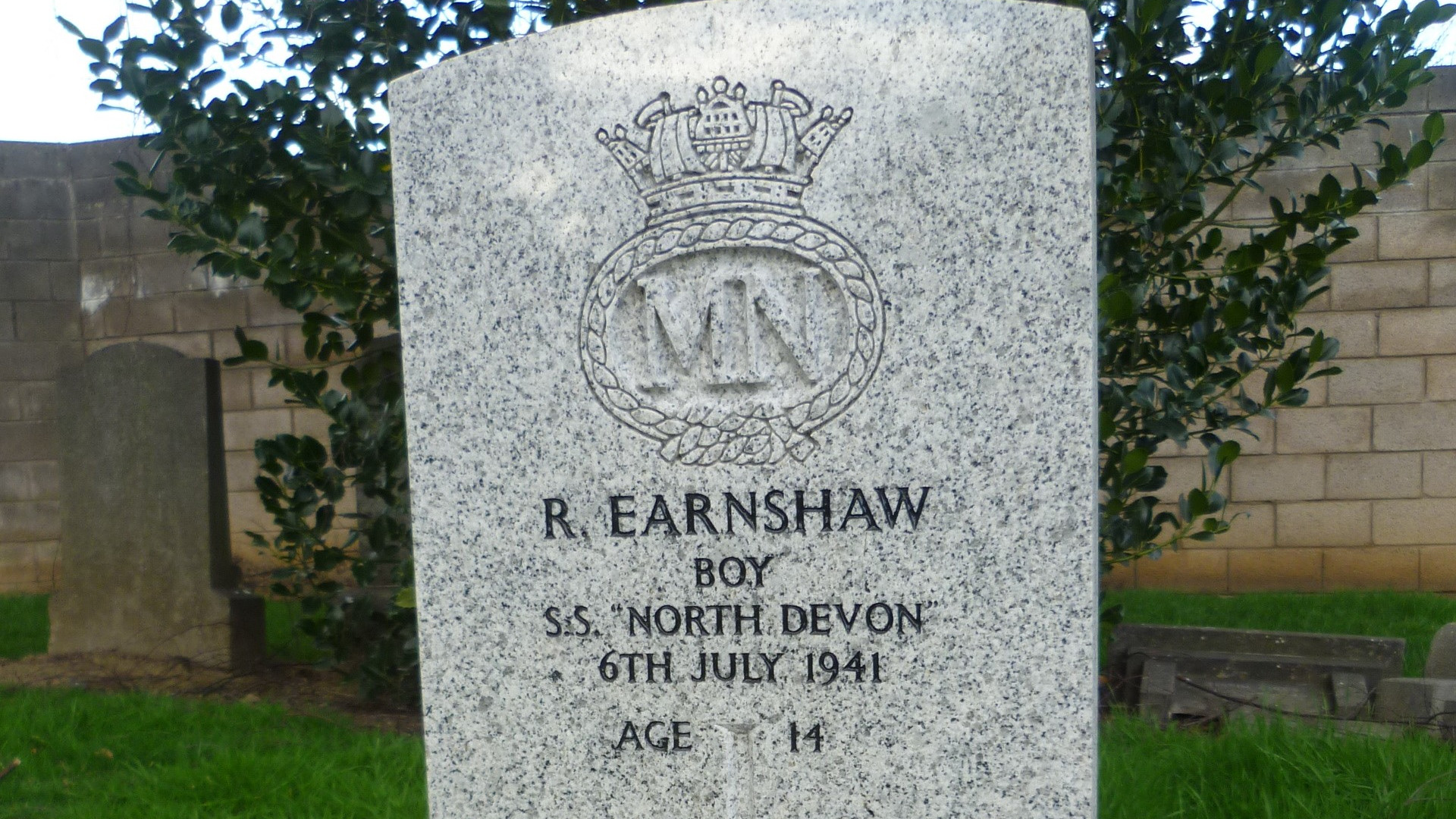 At the age of 14, Earnshaw, the youngest British military casualty of World War II, was one of many who lost their life and youth.

This article appears in: June 2010

Duty in the British Merchant Navy was hazardous during World War II. Braving the stormy Atlantic, the expanse of the Pacific, and the daily rigors of life aboard ship were challenging enough during peacetime; however, during the dark days of the war a determined enemy, bent on bringing the island nation and its far-flung empire to their knees, unleashed a vicious campaign against Britain’s merchant lifeline.

When the SS North Devon, en route to Tyneside, was attacked and sunk by German bombers off the Norfolk coast on July 6, 1941, the event in itself was not unusual. The mounting losses of merchant vessels to marauding German U-boats and aircraft were a condition—a symptom—of modern total warfare.

Among the six casualties aboard the SS North Devon was an unidentified cabin boy whose certificate of death estimated his age at about 15 years. Tragic enough, the boy was buried in an unmarked grave in Comely Bank Cemetery, Edinburgh. Actually, the youth had lied about his age.

The BBC reported recently that at 14 years, 152 days, Reginald Earnshaw was the youngest known Commonwealth service member to have died in action during World War II. Of course, there were many other young men who also lied about their age or creatively wrote the number “18” on a scrap of paper, placed it in their shoe, and stood before the recruiter, stating boldly that they were indeed “over 18.”

The story of young Earnshaw’s short life might well have continued without closure, his family members never sure of the final resting place of their loved one. Had it not been for the efforts of a former shipmate, Alf Tubb, only 18 years old himself at the time of the attack, Earnshaw’s sister, Pauline Harvey, now 77, would not have known the complete story.

Tubbs, now age 86, had served as a gunner aboard the SS North Devon. He searched for his friend Earnshaw as the ship sank, but, says the BBC, was forced back by smoke and flames. Years later, Tubbs began researching the incident with the primary purpose of finding out where Earnshaw had been laid to rest. Although genealogical research proved a dead end because Earnshaw had supplied an incorrect date of birth when he enlisted, an Internet search revealed that the 14-year-old merchant sailor had been buried in Edinburgh.

In an interview with the Daily Mail, Tubbs reflected that Reggie “was always on my mind. I don’t think he enjoyed the sea life too much. I remember him saying he was looking forward to going back home to see his mum.”

While placing flowers on Earnshaw’s grave, which today is marked by a granite headstone supplied by the Commonwealth War Graves Commission, Harvey, a retired teacher, remarked, “Reggie’s death at such a young age and after just a few months at sea came as a great shock to the whole family. I am immensely grateful to so many people who helped research my brother’s forgotten story, and to the War Graves Commission for providing his grave with a headstone.”

The identification of Earnshaw, who was actually born on February 5, 1927, and joined the Merchant Navy in February 1941, rewrites the record of the Commonwealth war dead. Previously, another merchant seaman, Raymond Steed, only 14 years, 207 days old when he died, had been listed as the youngest war casualty.

The death and destruction of war are the greatest of human tragedies, and dying young simply, poignantly compounds those tragedies. For every Earnshaw, Steed, or others who remain nameless, there is a story of family, lost life, and unrealized potential. Such is the price of war.