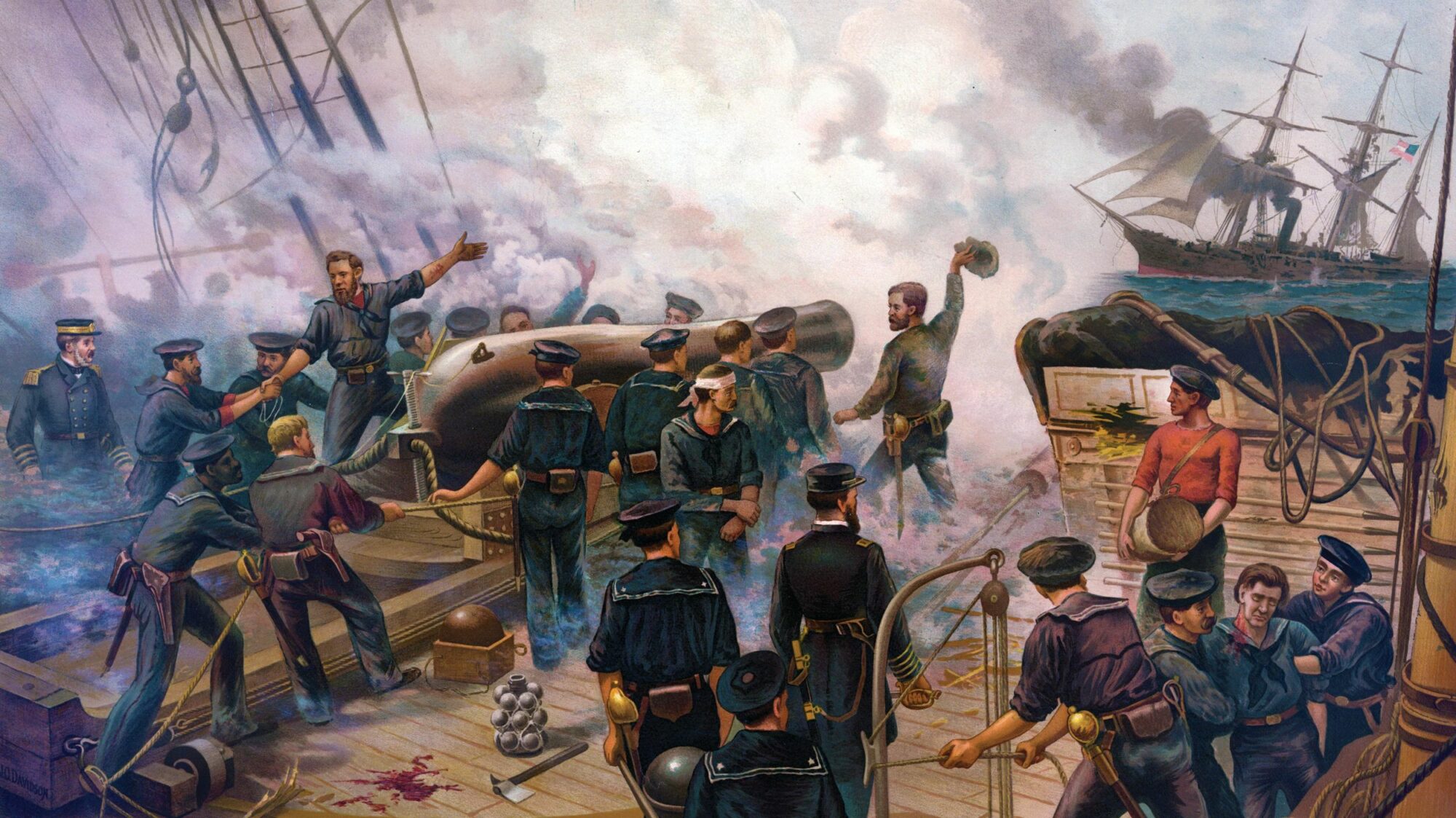 Photo Credit: The crew of an 11-inch Dahlgren pivot gun aboard the USS Kearsarge cheers the surrender of the CSS Alabama on June 19, 1864, in J.O. Davidson's painting of the historic naval battle. Captain Raphael Semmes, the commander of the Confederate raider, struck his flag when his ship began sinking.

The CSS Alabama terrorized Union shipping until the USS Kearsarge sunk it in 1864.

Cap’n! She’s a-comin! She’s comin’ out!” The cry of the bosun rang out from his perch on the mizzen mast high above the deck of USS Kearsarge. Captain John Winslow, the ship’s commander, called for his spyglass. The moment he had waited so long for might finally have arrived.

Winslow raised the instrument to his one good eye. He saw a large ship steaming out of Cherbourg harbor, gray coal smoke rising from its sleek form. It was June 11, 1864, and a long-awaited battle at sea was about to begin. The Confederate raider Alabama was coming out of the English Channel port to fight. Winslow called the crew to battle stations and pointed his own ship out to sea. He did not want to fight in French territorial waters, but once Kearsarge had sailed six miles from shore, he intended to destroy the Alabama and end its reign of terror on the high seas. 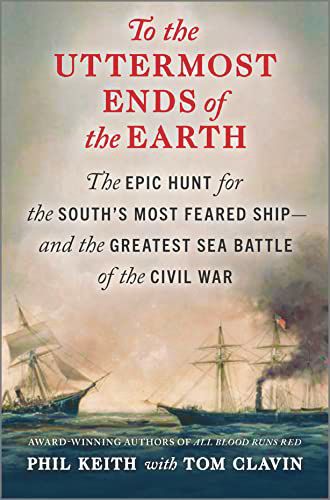 A veritable parade of ships followed Alabama as she made straight for her opponent. The French ironclad Couronne sailed first behind the Confederate warship. Close behind were two French pilot boats and the yacht Deerhound. Crowds lined the walls along the breakwaters, hoping to see the fight. When Kearsarge turned out to sea, many cheered, in the mistaken belief that the American ship was retreating. But Winslow desperately wanted to fight. Aboard the Kearsarge, Winslow traded his dress hat for an old sea cap, strapped on his pistol, and picked up a speaking trumpet so his commands could be heard above the din of battle.

Six miles out Winslow ordered his ship to turn toward Alabama and to put Kearsarge on the enemy ship’s stern. If he could slip behind the Confederate ship and cross her stern, then he could rake Alabama with his starboard battery. A westerly wind blew the U.S. Navy ship’s coal smoke to port away from her line of view on their opponent. The two ships then closed on each other at a combined speed of 25 knots.

Aboard the Alabama, Captain Raphael Semmes addressed his crew. “You have, at length, another opportunity of meeting the enemy,” he said. “The first [opportunity] that has been presented to you since you sunk the Hatteras!”

He proceeded to praise them for destroying and driving under the protection of neutral flags one-half of the United States’ maritime commerce. He also told them that the Confederate States of America appreciated their achievements. “The name of your ship has become a household word wherever civilization extends,” Semmes said. “Shall that name be tarnished by defeat? The thing is impossible!”

Cheers rang along the deck. Semmes finished by challenging his men to uphold the tradition of the Alabama. They rushed to their stations. A few minutes later the ships stood one mile apart. Alabama turned to show her starboard side to the Kearsarge. The Confederates let loose a volley, smoke encasing the ship’s side. Semmes looked through his telescope, but his gunners apparently had not scored any hits. At 1,000 yards, the Kearsarge replied with her own volley.

The ensuing battle between the Kearsarge and the Alabama became one of the most famous naval battles of the American Civil War. The Alabama’s long raiding cruise around the world did great harm to American shipping and made the vessel and its crew infamous. Their story, and that of the U.S. sloop of war that finally sank it, are told in To the Uttermost Ends of the Earth: The Epic Hunt for the South’s Most Feared Ship – and the Greatest Sea Battle of the Civil War (Phil Keith with Tom Clavin, Hanover Square Press, Toronto, Ontario Canada, 2022, 304 pp., illustrations, bibliography, index, $29.99, hardcover).

The narrative on this book flows almost like a novel. It intertwines the stories of Alabama, Kearsarge, and the Union merchant and naval vessels that Confederate raider hunted. It is well-researched, providing rich detail about the personalities, ships, and places. The author offers detailed biographies of the two captains, their frequently intersecting paths, and the political and economic situation of the war. The book is a worthy addition to the body of work naval warfare on the American Civil War.