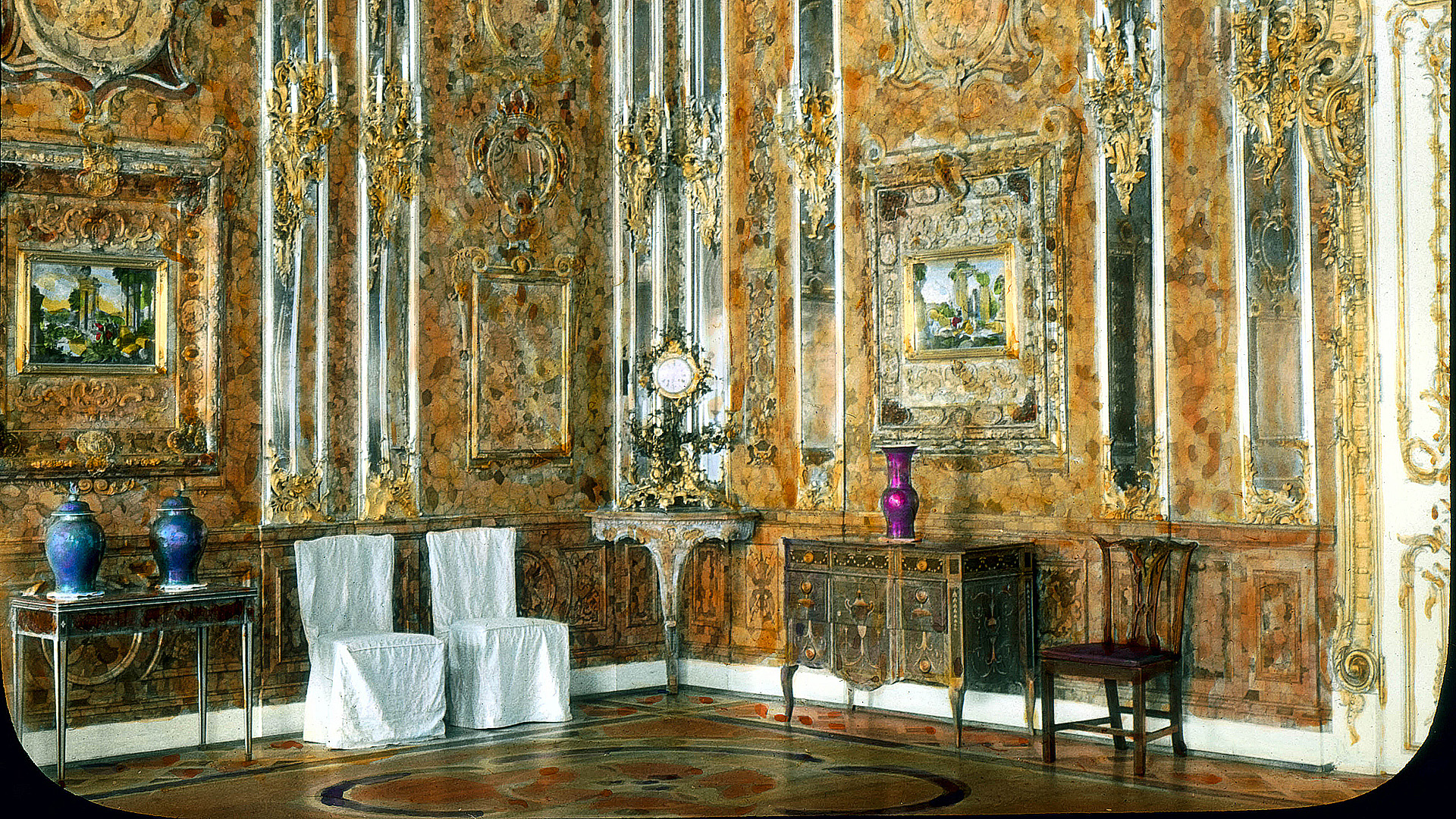 On the trail of the Amber Room

Nearly 20 years ago, I met a fellow in Germany (we’ll call him “Hans”) who was on his life’s quest to find one of mankind’s greatest treasures and solve one of WWII’s greatest mysteries—the fabulous Amber Room.

In case you don’t know, back in 1716 Kaiser Friedrich Wilhelm I gave a priceless gift—a room—made of gold, semi-precious stones, and carved amber (prehistoric tree resin) to Czar Peter the Great as a gesture of friendship between Russia and Prussia. It was installed in the Catherine Palace outside of St. Petersburg. So glorious was it that many called it the “eighth wonder of the world.”

After Nazi Germany invaded the USSR in 1941, soldiers dismantled the room, crated up the panels, and brought them back to Germany, where they were installed in a museum in Königsberg. In 1943, with the Red Army closing in, the room was dismantled once again and removed to no one knows where.

Some people think the panels left Königsberg on a ship that was then sunk by the Allies and lies on the bottom of the Baltic Sea—or were destroyed in a fire that consumed much of the city. Others believe that the crates were loaded onto a train that was then hidden inside a sealed-up tunnel in Germany. Other tales say the crates are under the waters of a lagoon. Still others think they are in tunnels beneath a castle in Poland.

My friend Hans is sure that the crates are in a sealed-up mine in a forest near his hometown in Thuringia. He and a small team of fellow treasure hunters have spent over 30 years trying to break into an abandoned slate mine to reach what they believe (thanks to some old maps) is the Amber Room’s final resting place.

They have found no amber, but came across a few intriguing artifacts that indicated that members of the Third Reich used this tunnel for something. Not only that, but the mine has some irregularities and, when Hans investigated about the current landowners, he found some very suspicious relationships. The owners are related to several important people, including West Germany’s first chancellor Konrad Adenauer, Hitler’s banker Hermann Joseph Abs, and a mine surveyor who was present at the mine in 1944.

Because the site is on private land, the team has had to do their work clandestinely on weekends, then cover up traces of their dig when they leave. I visited the site with Hans back in 2004 and it certainly had an air of mystery about it.

But Hans has not given up his search, which he and his group have continued despite having no funding. In a recent letter, he told me, “Last year we opened another tunnel about two miles from our main project. It was called B-tunnel and it had disappeared from the mine’s maps. Nothing was found, but our main project will go on. It is the most mysterious location ever. Work in the tunnels is dangerous and time consuming, but we will not give up.”

The reality is daunting. Without regular care, amber deteriorates. So, even if the room panels are discovered, chances are that they will be beyond repair and restoration.

A few years ago, my wife and I visited the Catherine Palace, where a full-size replica of the Amber Room was created and installed in 2003 (it took 25 years and cost $11 million). It is a faithful reproduction down to the smallest detail.

Yet, the lure of finding the original persists.

(Hans can be reached at: webmaster@amberroom.org. The Amber Room Organization will forward all emails to him.)