Lieutenant Commander Wade McClusky is the subject of a new biography.

This article appears in: December 2019

The carriers weren’t there.

Lieutenant Commander Wade McClusky looked out over the Pacific Ocean from the cockpit of his Douglas SBD Dauntless dive bomber and saw nothing. He was leading two squadrons of dive bombers from the aircraft carrier USS Enterprise in search of the Japanese carrier fleet near Midway Atoll, on June 4, 1942. At that point in World War II, the U.S. Navy was hard pressed against Japan’s Imperial Navy. The conflict tipped on a knife’s edge; the victor in this battle would gain the initiative. That meant McClusky had to find the enemy. With limited fuel, he had to decide where to search next. 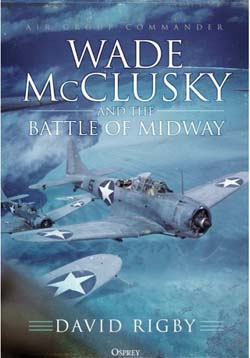 Later, many dramatized accounts of the Battle of Midway claimed McClusky guessed when he made the decision to turn north. He stated the decision was a logical one. There were many Consolidated PBY Catalina scout planes in the air west of Midway. McClusky believed if the Japanese fleet were south of his position, he would have gotten word, so the smart move was to search to the north. The American pilots set out to the northwest, beginning a box search for the enemy at 9:35 am.

Twenty minutes later, the decision paid off. McClusky spotted a Japanese destroyer, Arashi, making full steam to the northeast. The ship steamed to rejoin the main Japanese force after remaining behind to depth charge the submarine USS Nautilus. Assuming Arashi was rejoining its fleet, the Americans followed. At 10:05, McClusky spotted the wakes of the Japanese carriers and their escorts. After confirming they were indeed an enemy force, he made another rational decision. Four carriers sailed below, but the American force lacked enough bombs to guarantee the destruction of all four. Every ship knocked out decreased overall Japanese air power for the fight, so he decided to concentrate on the two nearest carriers, Kaga and Akagi.

The Japanese lacked radar; as a result, McClusky’s force got above them before they were spotted, and by then it was too late. Another force of SBDs from the carrier Yorktown also appeared. That enabled the Americans to also successfully attack the carrier Soryu. The pilots set up their attacks carefully, and it paid off. Within 10 minutes all three carriers were aflame, secondary explosions erupting from the fuel and bombs on the planes located on both the flight and hangar decks. McClusky’s own bombing run—on the Kaga—was a near miss, splashing into the water just alongside. It made no real difference; Kaga was already doomed. The first hit on Kaga was by Lieutenant Earl Gallaher, who had been present at Pearl Harbor and seen the destruction of the battleship USS Arizona. His thought at the time was, “Arizona, I remember you!”

Wade McClusky’s attack at Midway was a great success; the fourth carrier, Hiryu, was soon attacked and sunk just hours later. Six months of unrelenting Japanese attacks were stopped right there, and their string of successes ended. Imperial Japan was on the defensive for the rest of the war. McClusky would go on to serve throughout that war. An account of his service is here now in this new biography, Air Group Commander Wade McClusky and the Battle of Midway (David Rigby, Osprey Publishing, Oxford, UK, 2019, 384 pp., maps, photographs, appendices, bibliography, index, $35.00, hardcover).

McClusky was a humble man, and so he never really exploited his achievement, but his series of decisions that day had far-ranging consequences for the outcome of World War II. Admiral Chester Nimitz later stated that were it not for McClusky’s choices the war would have lasted three years longer. He was the right man in the right place at the right time to achieve a decisive result.

For all that, McClusky is still not well known outside of those interested in the war and the Battle of Midway. The author does a creditable job bringing this unassuming flying sailor into the light of public knowledge and well-deserved acclaim. The book covers Midway in great detail, and the author’s deep research is evident. There is also a wealth of information on the rest of McClusky’s war service as well as his prewar life and naval career. Throughout the book additional facts are used to flesh out the tactics, equipment, and aircraft that made up a naval aviator’s world during the war, creating a well-rounded story that gives the reader scope and perspective.