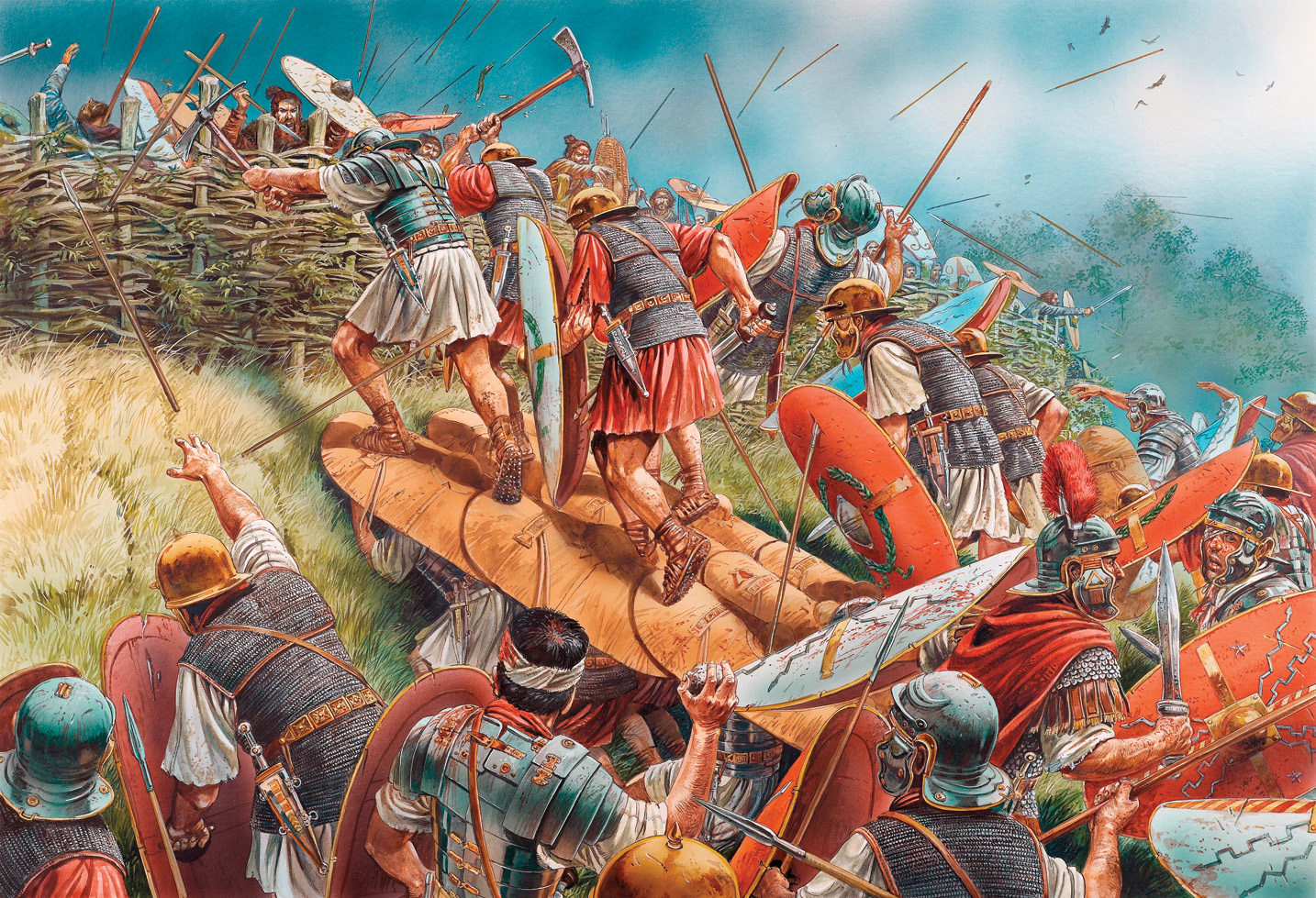 It was because of the cunning Arminius of the Cheruscan tribe that Publius Quinctilius Varus met his terrible fate.

With their proclivity for feats of engineering, the Romans methodically advanced their frontiers. The glory-seeking Roman generals saw a wide river, mountain chain, or expansive swath of desert as a challenge. Once across the geographical barrier, they sought to subjugate the barbaric people and rival armies that lay beyond.

When the semi-nomadic Germans crossed the Rhine River during the Gallic Wars, Julius Caesar promptly slaughtered their forces on the west bank and drove the survivors back across the wide river. He later bridged the mighty Rhine, constructing a bridge in just 10 days in 55 BC. The bridge most likely was located in the territory occupied by the Belgic tribe known as the Treveri near where the Moselle River joins the Rhine. But the bridge was merely a propaganda ploy to overawe the Germanic tribes, and Julius Caesar destroyed it when he withdrew a short time later.

Caesar Augustus took things a few steps further in regard to the Germanic threat. In 12 BC, he ordered Roman legions across the Rhine as a way to protect Gaul and establish a foothold in the vast area inhabited by the Germanic tribes.

In the last two decades of the 1st century BC, the Roman army under various commanders, including Drusus, Tiberius, and Lucius Domitius Ahenobarbus, had expanded the empire’s border east toward the Elbe River. But frequent revolts by the warlike Germans in the first decade of the new century threatened this expansion. It was an expansive, but ever tenuous foothold that the Romans established east of the Rhine.

The Romans had refrained from outright conquest of Germania in part because there simply were no large towns or cities to occupy and transform into Roman administrative centers replete with everything needed to supply their legions. The Romans, of course, continued to colonize northwestern Europe as evidenced by their conquest of Briton, which began during the reign of Emperor Claudius in 43 BC.

A dip in the cycle of revolts toward the end of the first decade AC lulled the Romans into a complacence in which they assumed that the Germanic tribes had accepted them as overlords. Arriving in Magna Germania in AD 9 was Publius Quinctilius Varus, who took over the governorship of the region. Varus’ talents were those of an administrator, not of a soldier with the strategic and tactical brilliance of a Julius Caesar or Tiberius. Thus Varus set about doing what politicians do best: taxing the people. The Germans did not have the commerce of the Mediterranean lands, and therefore the Romans failed to grasp that the Germans could not be taxed in the same manner. A bad situation suddenly got worse.

The Deceit of Arminius

Enter Arminius of the Cheruscan tribe, an ally of the Romans who had been trained as a Roman officer. He was an indispensable and trusted member of Varus’ staff. Arminius’ real loyalties lay with his people, and not with the Romans. Shrewd and cunning, Arminius deceived Varus into believing he was a loyal ally.

In autumn of that year, Varus made preparations to relocate from his forward headquarters on the Weser River to winter camp on the Rhine. About the same time, revolts suddenly erupted in northern Germany in much the same way small wildfires are started by lightning strikes. Arminius suggested the army detour to quash the rebellions before going into its winter camp. Varus agreed. The long Roman column set out. What awaited Varus was a horror he could not have imagined…