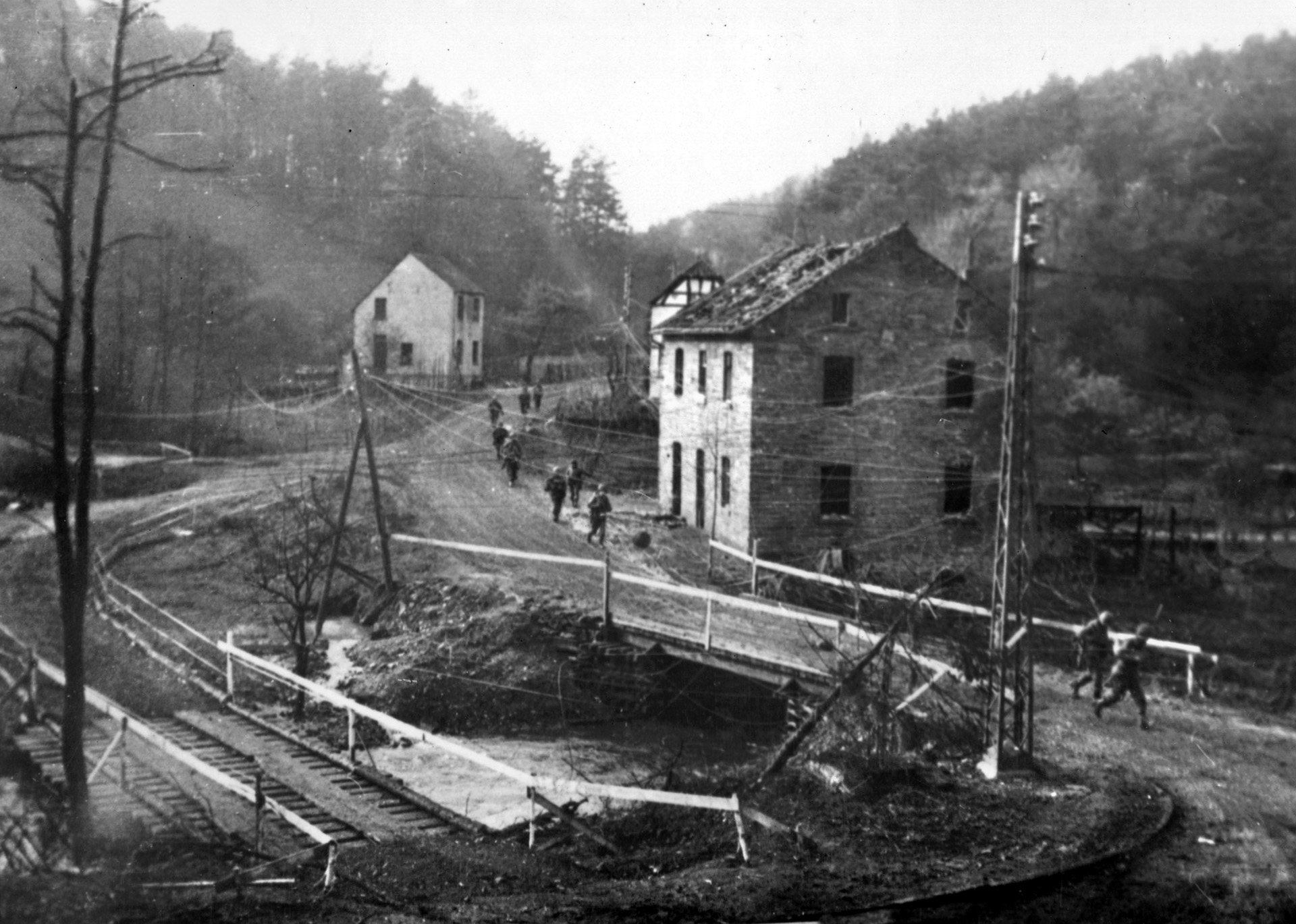 The woods were close-planted fir trees, and the shell-bursts tore and smashed them, and the splinters from the tree bursts were like javelins in the half-light of the forest,” wrote war correspondent Ernest Hemingway of the experience of Lt. Gen. Courtney Hodges’ U.S. First Army as it fought its way into the Hürtgen Forest just inside Germany in autumn 1944.

One way to appreciate the horrific conditions in which First Army fought is through the eyes of war correspondents such as Hemingway, Mack Morriss, and others. Their lyrical prose brings the wooded battlefield to life.

“The firs are thick, and there are 50 square miles of them standing dismal and dripping at the approaches to the Cologne plain,” wrote Morriss for Yank magazine. “The bodies of the firs begin close to ground so that each fir interlocks its body with another. At the height of a man standing is a mass of dark, impenetrable green. But at the height of a man crawling, there is room, and it is like a room, low-roofed and forbidding. And through this cave moved the infantry.”

The Siegfried Line, or West Wall, in the Hürtgen consisted of two bands. The Americans would first encounter the outer belt, known as the Scharnhorst Line, and then the inner belt, known as the Schill Line. German work parties had built these fortifications with steel and concrete before the war, and they multiplied the defensive strength of the German units occupying them many fold. Taken together, the dense forest and Siegfried Line fortifications were a nearly insurmountable challenge for an attacking force that could not bring to bear its airpower, artillery, and armor in a satisfactory manner in the thick woods.

The German forces sent to defend the Hürtgen had added their own obstructions. These last-minute obstacles, including roadblocks and log and earth bunkers, were “prepared magnificently,” wrote Morriss.

The Germans effective use of their artillery prolonged the fight. Hemingway saw firsthand the staggering firepower of the German 88mm flak gun used in direct ground support in the Hürtgen Forest. “The tanks and [tank destroyers] got up the hill and the flak guns (German antiaircraft guns, which fire almost as rapidly as machine guns, being used for direct fire on the ground against the attacking troops) opened up first,” wrote Hemingway in Collier’s Weekly, who accompanied the 22nd Infantry Regiment into the forest.

“American infantry moved up ahead of the M4 Sherman tanks to begin prying the Germans out of their bunkers,” wrote Hemingway. “About that time they really opened up with the 88s—the 88s and all that flak. One [tank destroyer] hit a mine … and the tanks began to run.”

But the Americans had what it takes to get the job done. And they gave as well as they received. Hemingway recalls watching a U.S. tank destroyer fire at close range at the steel door of a bunker to get the occupants to surrender. “That old Wump gun fired about six rounds and blasted that door in, and then you ought to have heard them want to come out,” he wrote. “They started to come out, and you never seen such a mess. Every one of them was wounded in five or six different places from pieces of concrete and steel.” This and similar techniques were repeated until the forest was clear.