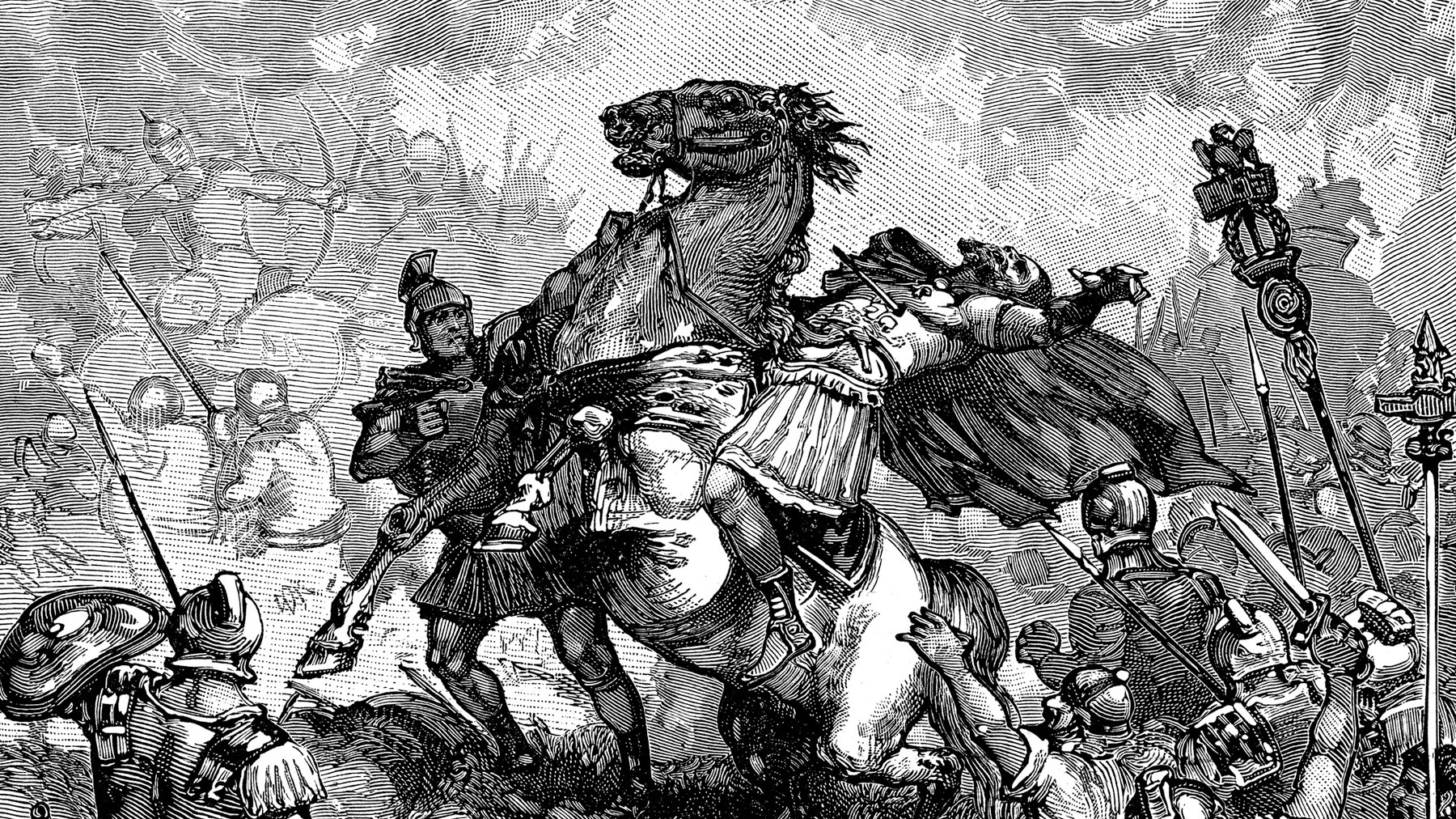 “[W]hen Emperor Julian had received the wound [in Persia], he filled his hand with blood, flung it into the air and cried, Thou hast won, O Galilean,” wrote Theodoret of Cyrus. Emperor Julian, who reigned from 361 to 363 CE, had received that fatal wound during his last duel with the Savaran armored knights of Persia, but not before defeating the armored gladiator-type Persian infantry at the very gates of Ctesiphon, capital of the Sassanian Persian Empire. Had Julian the Apostate conquered Persia, he may well have become history’s second Alexander, leading Roman armies far to the east toward India and Central Asia. Julian already had proven his martial mettle in the crucible of battle against Europe’s Germanic warriors.

Julian had abjured Christianity in favor of returning the empire to pagan cults, such as Helios, Dionysis, Apollo, and Mithras, the Persian god of war. His rise to emperorship had been paved with blood. Constantius II, one of the late Emperor Constantine’s sons and a cousin of Julian whose reign from 317 to 361 proceeded Julian’s reign, slaughtered many members of Julian’s family. Following this massacre, Constantius II and his brothers Constantine II and Constans I became co-emperors. Through the arrangement, each ruled a portion of the vast Roman Empire. Constantine II exiled Julian and his stepbrother Gallus into a strictly confined Christian education in Bithynia, Nicomedia, and then Cappadocia, where Julian was also exposed to classical learning. Julian was then summoned in 355 to Constantius II’s royal grounds in Milan (ancient Mediolanum) before departing for Athens.

Appointed as Caesar of Rome

Rome’s imperial order experienced violent changes. In 340 CE, Constantine II lost his life battling Constans, who in turn died in combat 10 years later against a certain Magnentius, a pretender to the throne. As the empire’s last surviving emperor desperate for survival, Constantius II appointed Gallus as caesar of Rome’s eastern realms. This freed Constantius’ hand to finally crush Magnentius by 351.

Gallus’ rapacious rule over Rome’s eastern realms resulted in his execution in 354. Julian was then summoned to court on accusations of treason but was cleared of all charges. Julian was appointed as caesar of Rome’s western provinces in 355. To cement the appointment, Julian married Constantius II’s sister, Helena, but despite this, Constantius II distrusted Julian. Fate and the charisma of Julian himself soon changed that.

JIn 356, Julian demonstrated his prowess as a military commander with the campaign in the Rhine region. He cleared the Franks out of Cologne (ancient Colonia Agrippina) and returned to Gaul. The Franks counterattacked, and Julian was besieged for a number of months, but General Marcellus rescued the situation and repelled the Franks. Julian was then appointed as Magister Equitum, but the Germanic threat was far from over.

Constantius II ordered a massive strike in 357. Julian was sent with 13,000 troops from Gaul eastward into Germanic territory with a second force of 25,000 troops led by Barbatio marching northward from Milan. Julian’s drive eastward was soon delayed by the attacks of the Laetian tribes. Stranded deep inside Germanic lands with Julian nowhere in sight, Barbatio was obliged to withdraw back into Roman territory. With Barbatio out of the campaign, the Germanic king Chnodomarius concentrated all of his might against the now vastly outnumbered Julian.

The great battle occurred in the region of Strasbourg. Chnodomarius scored an initial success by routing the armored Roman cavalry, but the Germanic warriors failed to capitalize on this success to outflank the beleaguered Roman forces. The turning point came when a powerful charge by the Germanic warriors failed to break the Roman center. The Romans responded with a devastating counterattack, trapping the Germanic warriors in a deadly crescent formation. Pressed on their flanks and having suffered heavy casualties, Chnodomarius’ troops panicked. They attempted to flee, but to no avail. Julian’s legions hunted down many of them with sword, arrow, and lance. It is believed that 6,000 to 8,000 Germanic warriors were killed. Untold numbers were also drowned by the weight of their amor in the Rhine River as they attempted to swim to safety. The Germanic humiliation was complete. Chnodomarius was captured and sent as a trophy to Constantius II.

Just as Rome had achieved military dominance in northwest Europe, terrible news arrived from the east. The mighty armies of Shapur II, the Shahanshah (King of Kings) of Sassanian Persia, had attacked Rome’s eastern marches, capturing in 360 Amida, Busa, Rema, Singara, and Bezabde. Constantius II then attempted to recapture Bezabde the same year, but he was defeated by the stolid Sassanian defenders, forcing him to retreat to Antioch.

As Rome’s military position crumbled along the Persian frontier, Constantius II asked for half of Julian’s Gaullish forces to be transferred to the east. The emperor’s order had actually bypassed Julian and gone directly to his commanders. Constantius was distressed to witness no western troops arriving to rescue Rome against the Persian threat. Instead, Julian was declared as augustus of the entire Roman Empire by his troops in 360 in what is now Paris (ancient Lutetia). Instead of marching against the Sassanian Persian empire, Julian continued to batter the remaining Franks and then to crush yet another Germanic king, Vadomarius, the following year.

Rome was now in danger of sinking into a deadly civil war. Julian sent three armies on campaigns: one force headed for northern Italy, another toward Raetia (roughly southern Germany, Austria, Switzerland, and Liechtenstein), and the third toward the Adriatic coast. The latter force, led by Julian himself, travelled in boats, heralding the upcoming epic naval deployment into the Tigris against Persia. Pro-Julian forces now controlled Illyricum (roughly modern Croatia, northern Albania, and Bosnia) and Thrace. Pro-Constantius forces intervened in the Adriatic with Constantius’ eastern Roman armies marching to Europe to confront Julian.

Rome escaped the seemingly inevitable disaster of a civil war. Constantine II died on November 3, 361, but made magnanimously clear in his final will and testament that Julian was his rightful successor. Affirmation of Julian as augustus rescued the Roman military machine from splitting into warring factions.

Julian finally had his set-piece battle with Shapur II on June 22, 363, at Maranga. The Savaran formed in the center with armored horse archers supporting them on their flanks and battle elephants standing to the rear. As at Strasbourg, the Romans again used a crescent-shaped formation. This shielded Julian from being enveloped by the Savaran. Sassanian archers were certainly deadly, but the Romans neutralized them by rushing toward their positions as quickly as possible. Julian’s strategy of forcing the Sassanians to fight at close quarters paid off with a tactical victory. But Julian’s victory proved to be a pyrrhic one. The bulk of the Spah remained intact and withdrew in good order. Unlike the Germanic warriors at Strasbourg, Sassanian warriors did not panic because they, like the Romans, were heir to a longstanding professional military tradition. Far more ominous was the fact that the battle at Maranga had failed to destroy the Savaran.

The tables were now turning against Julian. He was fighting on hostile ground, running dangerously short of supplies, and experiencing mounting casualties that could not be replaced. Julian was paying dearly for his error in sending Procopius to the north to link up with the Armenians. The invasion was now turning into a war of attrition Julian could not win. The lance-bearing Savaran had now increasingly seized the initiative by attacking Julian’s army at times and places of their own choosing. Persian armored horse archers supported the Savaran’s raids by shooting their arrows from a distance. Shapur’s generals were wearing Julian down with Cossack-style raids, not unlike those that harassed Napoleon’s Grande Armee in Russia in 1812.

The turning point came just four days after Maranga on June 26, 363, when Julian reached Samarra. The Savaran again launched their lance strikes against Julian’s columns, placing the Roman right wing in jeopardy. This crisis encouraged Julian to bravely enter the battle in person to rescue the situation, but he foolishly appeared without his armor. Just as he and his troops were locked in combat with the Savaran, a lance whisked toward Julian and fatally pierced him. It is still unclear as to who actually threw the spear at Julian. Was it a disgruntled Christian in Julian’s camp or a Sassanian warrior? What is clear is that Julian succumbed to his wounds and died later that evening.

The invasion was an unmitigated disaster. Julian, the scholar-warrior, was dead with his battered army stranded deep inside Persia. Surviving Roman troops, now led by Jovian, were forced into the humiliation of requesting peace terms. In exchange for safe passage out of Persia, Jovian yielded to Shapur II’s demands that Rome surrender strategic border territories and cities such as Nisibis to Persia. Julian’s dream of becoming the new Alexander had died with him in the sands of Persia.