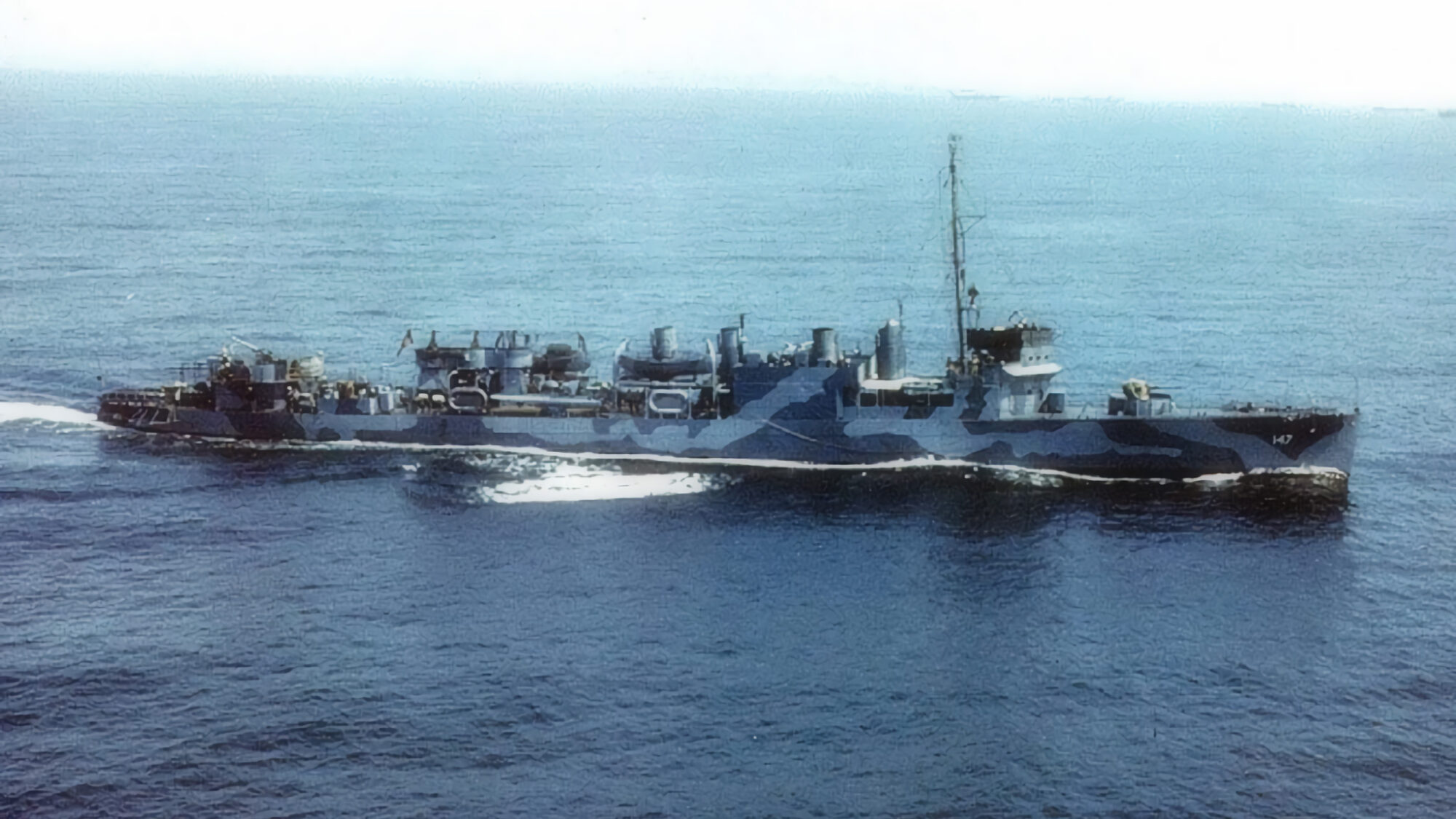 During the Second Happy Time, the destroyer USS Roper struck a blow against marauding U-boats.

British Prime Minister Winston Churchill once admitted that the only issue to trouble him to the extent that he thought World War II might be lost was the uncertainty of the Battle of the Atlantic and the U-boat peril that threatened to starve the British Isles into submission.

While the U-boats did wreak havoc in the Atlantic sea lanes and elsewhere for a time, Allied countermeasures turned the tide. Nevertheless, during the First Happy Time, from July 1940 to late October of that year, U-boats managed to sink nearly 1.5 million tons of Allied shipping. Then, after the U.S. entered the war, the U-boats descended upon the East Coast of the United States from New England to Florida and the Gulf of Mexico. Codenamed Operation Paukenschlag, or Drumbeat, the Nazis initiated their Second Happy Time. From January to August 1942, U-boats sank 3.1 million tons of precious cargo—not all of it in U.S. waters—but enough to raise serious concerns.

The U.S. Navy had disregarded British warnings about dealing with U-boats, particularly eschewing the convoy system for an extended period and failing to mandate blackouts of major ports, thus allowing U-boat commanders to silhouette their targets against the gleaming lights of American cities. Lessons were learned the hard way, and the U-boat arm of the Kriegsmarine eventually suffered a greater percentage of casualties than any other in the German armed forces.

One significant U-boat death occurred 80 years ago this month, and it was the first U.S. Navy success against the menacing submarines during World War II. On the night of April 13, 1942, the World War I-vintage Wickes-class destroyer USS Roper was patrolling off the coast of North Carolina. Three days earlier, the Type VII submarine U-85 had sunk the Norwegian freighter Christen Knudsen, its third kill during a career that had begun on April 10, 1941, a year earlier—almost to the day.

Just after midnight, Roper contacted the U-boat near Bodie Island Light while utilizing British Type 286 radar. The distance was 2,700 yards, and U-85 was within visual range of the light. The commander decided to flee on the surface, but not before he ordered the stern tube to fire a single torpedo with a range of 700 yards towards the charging destroyer.

Roper dodged the torpedo, and when the range closed to 300 yards, U-85 made a sharp turn to starboard, only to be caught in the destroyer’s searchlight beam. While German sailors dashed to man their 88mm deck gun, Roper engaged with a fusillade of machine-gun fire. Seconds later, a 3-inch shell struck home. The U-boat crash-dived, but Roper laid a spread of 11 depth charges, finishing off its quarry.

During the hours of darkness that followed, no attempt was made to rescue German sailors from the water, as the destroyer skipper, Lieutenant Commander Hamilton Howe, was concerned with the possibility of attack from another U-boat. After daylight, a PBY Catalina flying boat and an airship joined in the search. Twenty-nine German bodies were recovered and later buried in the Hampton National Cemetery in Hampton, Virginia. Howe and Commander Stanley C. Norton, commander of Destroyer Division 54, both received the Navy Cross for the sinking.

Controversy later emerged. One U-boat veteran wrote more than half a century after the incident that Howe’s decision to delay seeking survivors should be investigated. Some of the bodies recovered were reported to have been wearing civilian clothes and carrying U.S. currency and identification.

Regardless, the U-boat now lies in less than 100 feet of water, and its hatch is on display in the Graveyard of the Atlantic Museum in Hatteras, North Carolina. The U.S. Navy had its first triumph over the menacing undersea marauders.

Recreational divers visit the resting place of U-85 frequently, and the top-secret Enigma machine the U-boat carried was later brought to the surface. In 2003, the German government agreed to allow the Enigma to be displayed at the museum in Hatteras, and in 2015, the wreck site was listed on the U.S. National Register of Historic Places.