The Allied officers interned at Oflag XVIIA planned and orchestrated one of the more daring POW escapes of World War II.

Spring had finally arrived in the mountainous area of the Austrian Waldviertel, land of long winters and short summers. Timid clumps of grass were showing up here and there in the meadows, at one time verdant, but now barren surfaces. In the distance, light green growth softened the dark green of the dense woods of pines surrounding the camp. Inside the camp, taking advantage of the welcomed warmth, the men laid out their clothes and all kinds of articles to air and dry out the mustiness of months of winter rain and snow. 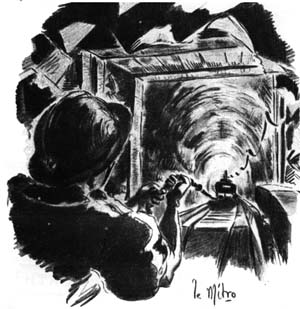 In one of the prairies behind a barracks, half a dozen men were busy with shovels and wheelbarrows moving clumps of earth around what was known as the open-air theater, in reality a gentle slope with a makeshift stage at the bottom, a place where the men could sit on the ground to watch plays, shows, and other entertainment. They were digging a trench. A few feet from the edge of the theater and parallel to the slope a double row of barbed wire stretched from one watchtower to the other. Rumor had it that the trench would serve to channel the water from the frequent downpours to prevent flooding of the hill. The men digging the trench were prisoners of war in Oflag XVIIA, one of 17 German prisoner of war (POW) camps predominantly holding French officers during World War II. Located on a remote plateau some 60 miles northwest of Vienna, close to the Czechoslovakian frontier, Oflag XVIIA housed 5,000 officers, captives since June 1940. Twenty-eight low-lying wooden barracks—each 5,400 square feet and occupied by 220 men—bordered a central alley. In the back of the barracks were the meadows. The entire complex was enclosed by a double row of barbed wire. And in the months to follow, it would provide the setting for one of the more daring POW escapes in the entire war.

Creating Their Own French Village

As soon as they arrived, the officers organized their own command, and in the intervening three years created the feel of a small French town, adding landscaping to the barren alley, transforming a vacant spot off the alley into a central square with a gazebo, and erecting a bell tower for the barracks designated as a church. They established institutions such as a library and a university that held regular classes, entertained with a number of theater troupes and an orchestra, and formed sports teams. They clandestinely acquired 23 radios and formed a fully functioning news service, which redacted a daily communiqué to be read in each barracks every evening, keeping the prisoners abreast of the progress of the war. Over the years, individual prisoners attempted 32 escapes using a variety of means. Some would hide in boxes in the middle of trucks leaving the camp, or under the truck, or cut the barbed wire and pass under it. Two or three men would build tunnels, starting usually under a barracks. No one succeeded in making good their escape. The Germans probed the ground around the barracks and examined their flooring most every day. Sometimes telltale signs, an imprudent remark, or occasionally a stool pigeon caused the unfortunate discoveries. Three men lost their lives.

Choosing the Location of the Tunnel 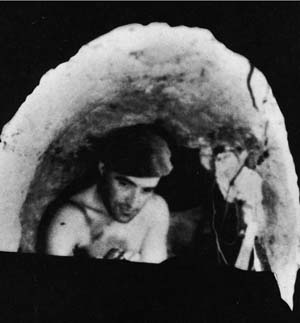 Aware that previous tunnels originating in the barracks had been discovered, the prisoners looked for other ways to escape. After surveying the entire camp, two of the POWs, a captain who had served in an engineering regiment and an infantryman, decided that the best place was at the upper corner of the open-air theater. It was the closest area to the outside barbed wire enclosure, requiring a tunnel half the length of one originating from under a barracks. It also had the advantage of being near the only road, which opened the possibility of access to a train station. The major hazards, however, were the theater’s proximity to a watchtower and constant patrolling by guards inside the camp. To conceal the underground activities, the prisoners needed to justify some work on the grounds. To that end, the two officers sketched out a proposal that they said would improve the open-air theater. They showed it to the ranking POW officer, who immediately approved it to be presented to the German prison administration. For that purpose, a prisoner who was a professional architect drew an elaborate plan. It included cosmetic improvements and emphasized that drainage of the water was essential to prevent the flooding of the hill. To correct the potential problem, it was proposed that a ditch should be dug around the theater.

Rain Delays and the Discovery of the Blower

Work started on May 26, 1943, with two teams, one underground and the other above ground. It took the underground team one day to complete the entry shaft, a 60-inch hole almost 10 feet deep, mixing the excavated earth with some of the earth from the ditch. Next, they fitted a casing, which had been prepared in a barracks, and dug a storage room for handling the bagging of excavated earth. Then they were ready to begin digging the tunnel. Meanwhile, the above-ground team worked as slowly as possible digging the ditch, building mounds on both sides and a bridge over the shaft. Rain and a few raging storms delayed the work. The tunnel advanced very slowly. As summer began, it was just 40 feet long. Still, it was too long to be without ventilation. One of the POWs set out to build a machine that would serve as a blower and was almost finished when the Germans arrived at his barracks for a routine search before the watch team could send a warning. They found the blower. They did not know, however, who was building it. Nevertheless, the excavation had to stop. With all the delays, time was now of the essence. A date of mid-September set for the escape was the latest the prisoners could make their move before the onset of winter. To catch up, they organized an underground team of five men. Two labored at the working face. One dug while the other shoveled the excavated earth into a cart, now with wheels moving on tracks. When the cart was full, he signaled to a comrade at the entrance to pull the cart. This third worker emptied its content into bags, signaled to his comrades at the end of the tunnel to pull the empty cart back, and then passed the bags to the above-ground team. Two other men activated the blower, a particularly excruciating task. The teams were regularly replaced.

This story can be found in the Top Secret department of
the WWII History Magazine.
Pick up your copy today! 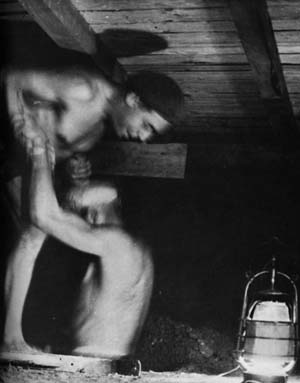 The excavation began moving at a good pace. The above-ground team mixed the earth from below with the earth of the enlarged trench and spread it and packed it down to create what looked like flat couches for the so-called solarium. The entire enterprise was supported by many other prisoners in the camp. The tailors sewed all kinds of civilian clothes. At least one man was disguised as a woman. Some compasses had been hidden in packages, and others were made in the camp. They made false identity papers, taking pictures with a clandestine camera. They copied maps, train schedules, and permits obtained from young Frenchmen who had been forced to work in Germany. They also provided the would-be escapees with German money. On September 14, the underground team found a note from the engineer, who had inspected the tunnel the previous evening, informing them that the tunnel had reached its planned length and instructing the team to build the exit shaft. The team broke through the ground and installed a trap, which would be lifted when the first wave of escapees departed and replaced for the second wave and a potential third wave. After 31/2 months of hard work, the men at the exit portal looked up at a pure blue sky, a free strip of grass about 65 feet beyond the barbed wire enclosure, and the open road about six feet away. The tunnel ended exactly where it had been planned.

The prisoners devised an intricate stratagem for the entrance of the men into the tunnel. As a diversion, they scheduled some competitions in the stadium, far from the theater. Starting at noon, small groups of three or four walkers began crisscrossing from all directions. When they reached the theater, they engaged in an animated discussion with three other men sitting at the edge of the ditch near the shaft, forming a group that provided a screen for one man to disappear into the shaft. Once in the tunnel, the men lay down on their backs with their bags on their chests and with the next man’s head on their stomachs. It was a long wait, from afternoon to after nightfall. It proved to be too arduous for two of the men, who fainted despite the full force of the blower. They had to be evacuated. Altogether, 131 men escaped.

The next morning, roll call took place in the barracks. The men had devised a system for some to be counted twice, using traps in the ceiling. The roll call came out exactly right. By mid-morning, however, a call from the Viennese police alerted the camp commandant that they had picked up a few prisoners. Another roll call was held. In the new count, 42 men were missing. After an extended search, the entry shaft was located by midafternoon. Then, a rigorous, painstaking roll call by numbers, checking each prisoner’s tag, showed that 120 men had disappeared. The Germans were so incredulous that they thought it was a joke and asked the prisoners to come out of hiding.

Benefiting from being the first large escape and with the German high command anxious to conceal it as much as possible, the escapees were brought back to the camp and subjected to only some minor retaliation. Two were killed during their recapture. Eleven reached Hungary, where they were put under house arrest in Budapest. Over time, they escaped to join the resistance groups in Slovakia andYugoslavia and some French partisans. One of them went through Turkey to North Africa and joined the French Army, which landed in southern France in August 1944. He was killed during the liberation of Alsace, fighting with the French First Army led by General Jean De Lattre de Tassigny. One escapee reached France some months later.

This story can be found in the Top Secret department of
the WWII History Magazine October 2014 issue.
Pick up your copy today!