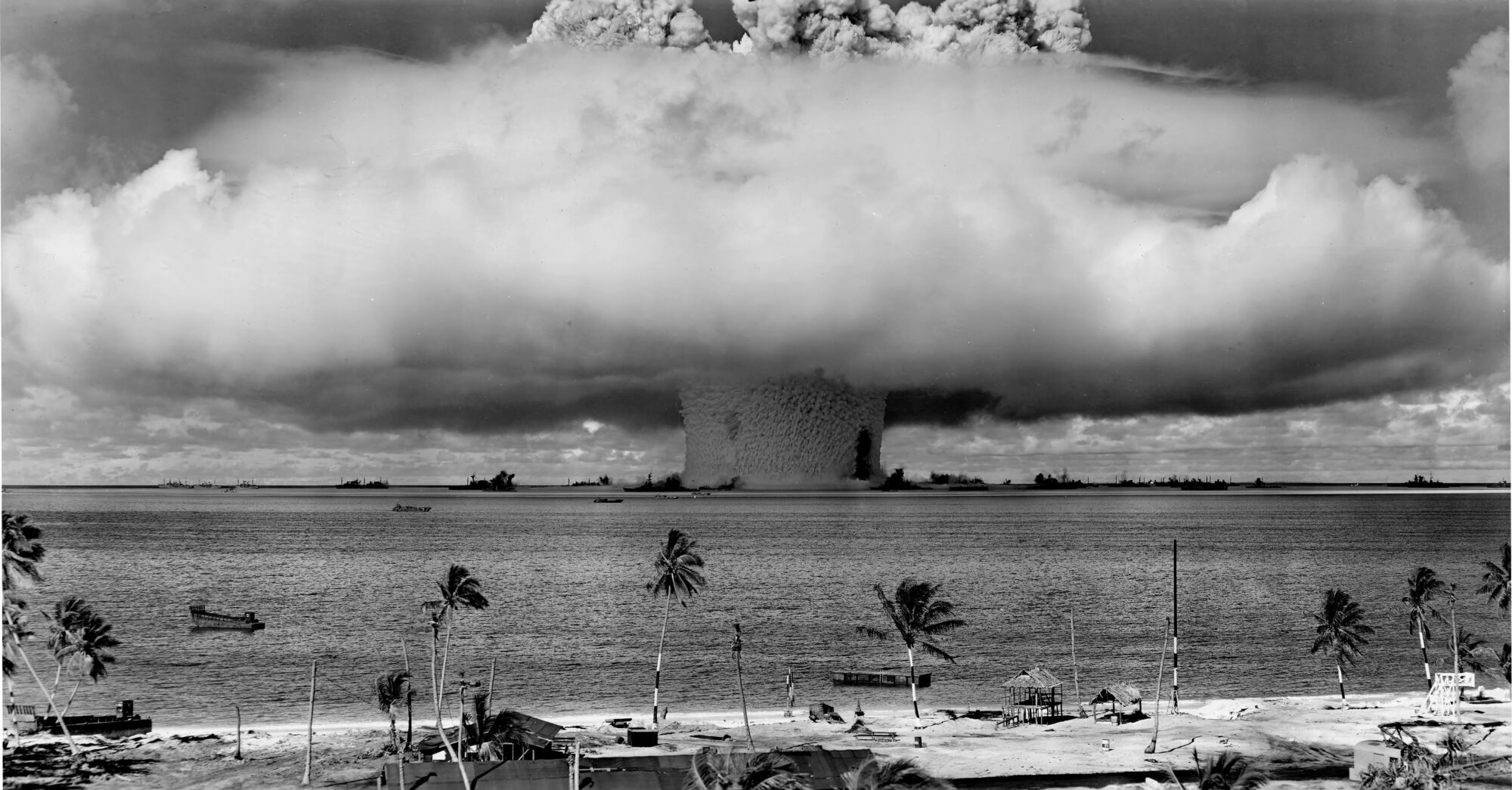 A Graveyard of Ships at Bikini Atoll.

This article appears in: December 2018

At the dawn of the Cold War, the United States probed the potential destructive power of nuclear weapons, particularly their effect on warships. In the summer of 1946, one of its earliest efforts was dubbed Operation Crossroads, the first nuclear tests since the detonation at Trinity site in New Mexico, prior to dropping the atomic bombs on Hiroshima and Nagasaki that ended World War II.

The chosen location for Operation Crossroads was Bikini Atoll, a tranquil cluster of 23 small islands surrounding a lagoon in the Marshall Islands of the South Pacific. A pair of nuclear detonations was planned, and 167 native residents were told in February 1946 that they would have to leave their homes because of research that might one day be a deterrent to future wars. On March 7, the natives boarded LST-861 for a move to Rongerik Atoll, 128 miles east of Bikini, after their chief had said, “We will go, believing that everything is in the hands of God.”

Channels were blasted through the coral reef at Bikini to gain access to the lagoon, and the target fleet included Nevada and four other old battleships, two aircraft carriers, two cruisers, 11 destroyers, eight submarines, and three captured warships that belonged to former enemies Germany and Japan. Other auxiliary vessels were also among the target ships, and an array of small animals and insects was brought to the scene as well, later to be examined for the effects of radiation.

Test Able was carried out on July 1, 1946, as a Boeing B-29 Superfortress bomber dropped a single bomb, nicknamed Gilda, with a 23-kiloton payload. It detonated at an altitude of 520 feet, missing the Nevada, its orange-colored aiming point. Ships were sunk or damaged, but the extent of the destruction was unimpressive—although the horrific effects of radiation were just beginning to be understood. Test Baker was carried out on July 25, the bomb suspended beneath the landing craft LSM-60 and detonating at a depth of 90 feet.

Between 1946 and 1958 a total of 23 nuclear tests were conducted at Bikini Atoll. The site became extremely radioactive, and the natives were never able to return to the island permanently. Small groups returned a couple of times during the 1970s, but they were later withdrawn, and the atoll remains uninhabited to this day.

Bikini has been designated as a ship graveyard by the U.S. Navy. While Nevada and others that participated in the tests do not rest there, many ships significant in the drama of World War II are on the bottom of the lagoon. These include the aircraft carrier USS Saratoga, the only ship sunk during the Baker test. Saratoga was carrying surplus aircraft, vehicles, and ammunition when the atomic blast lifted the 37,000-ton ship out of the water. Today, the wreck is a popular scuba diving attraction.

The Japanese battleship Nagato lies upside down in the Bikini lagoon. After the Baker test, she began to list slowly to starboard. Five days after the detonation, the old battleship, flagship of Admiral Isoroku Yamamoto during the Pearl Harbor raid in 1941, capsized and went to the bottom in just 110 feet of water. The Nagato is listed as one of the top scuba diving wrecks in the world today.

The Nevada and several other survivors of Operation Crossroads were later used for target practice or towed elsewhere. Some were first towed to Pearl Harbor and then to San Francisco for damage assessments, and others, including the German heavy cruiser Prinz Eugen, consort of the famed battleship Bismarck, were towed to Kwajalein Atoll, where they later sank due to the damage sustained at Bikini.