The ace combat series takes to the skies for another inspired and exciting aerial adventure.
Julian Gnam
No comments
Categories: Military Games

When it comes to arcade-style aerial action, there’s always been something special about Bandai Namco’s Ace Combat series. From its humble beginnings on the original PlayStation in 1995—back when the series was known as Air Combat in the West—to the high-flying games as we know them today, development team Project Aces has always done a solid job of walking the line between flight sim and all-out over-the-top dogfighter. That tradition continues in style with Ace Combat 7: Skies Unknown, which is now available on PlayStation 4, Xbox One, and PC.

No matter which platform you go with, you’ll be treated to another surprisingly gripping narrative and the type of aircraft combat that continues to set a standard for the genre. This time around, Skies Unknown follows up on the events of Ace Combat 04 and Ace Combat 5, putting players back in its own fictional universe of warring nations with extremely tenuous ties to anything that might be going on in the real world. The conflicts presented between the Osean Federation, Erusea, and the rest of the Usean continent are done so in broad strokes, doing little more than setting the stage for the sky-high shooting that serves as the series’ bread and butter.

The first character you meet is an Osean aircraft mechanic named Avril Mead. While taking a recently restored fighter jet for a test flight, she ends up caught smack dab in the middle of a Erusean surprise attack that sends an overwhelming number of UAVs out to take down as many military targets as possible. This ostensibly innocent act lands Avril in the slammer, sentenced to forced labor at the Osean Air Defense Force’s 444th Air Base. Meanwhile, players step into the role of a pilot with the callsign Trigger, who eventually ends up crossing paths with Avril in a story with plenty of twists, turns, and explosive combat situations. 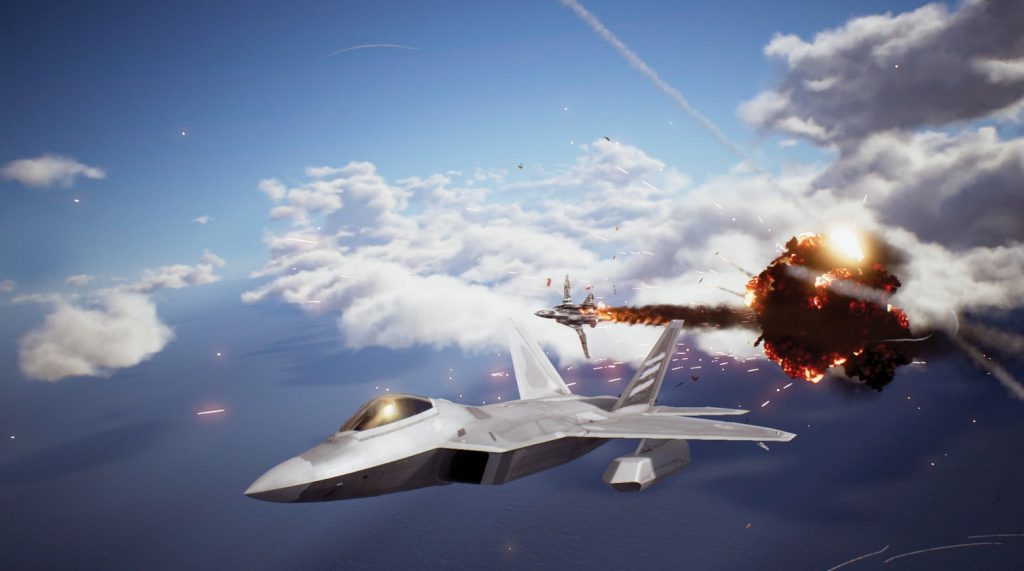 It’s very Ace Combat to take the story so seriously, and that’s part of the series’ charm. There are moments that will have you itching to get through a cutscene so you can start the next sortie, but the campaign is handled impressively well overall. Once you do get in the cockpit, though, Ace Combat 7 really shines. The team wastes no time getting players into the thick of the battle, pulling off deft aerial maneuvers and facing intense threats that range from the opposing military forces to the very weather itself. Skies Unknown might just have the most thrilling weather conditions of the series to date, and there are a few missions that feel genuinely dangerous as a result.

While some of the piloting is indeed realistic, especially for a series with console roots, Ace Combat’s arcadey design comes through once it’s time to unleash hell on the enemy. In the spirit of classic shooters, Trigger’s planes are loaded with a seemingly limitless number of normal and special missiles. Having such an absurd arsenal on hand would be impossible in real life, but thankfully Ace Combat doesn’t care a lick about true mechanical limitations. As you progress and earn more funds, you’re able to unlock and customize additional aircraft, forming your own impressive hangar along the way. Depending on how invested you are, you can sink a lot of time and thought into perfecting your loadout, filling out the aircraft tree with increasingly powerful armaments, and setting yourself up adequately for some of the tougher missions down the line. 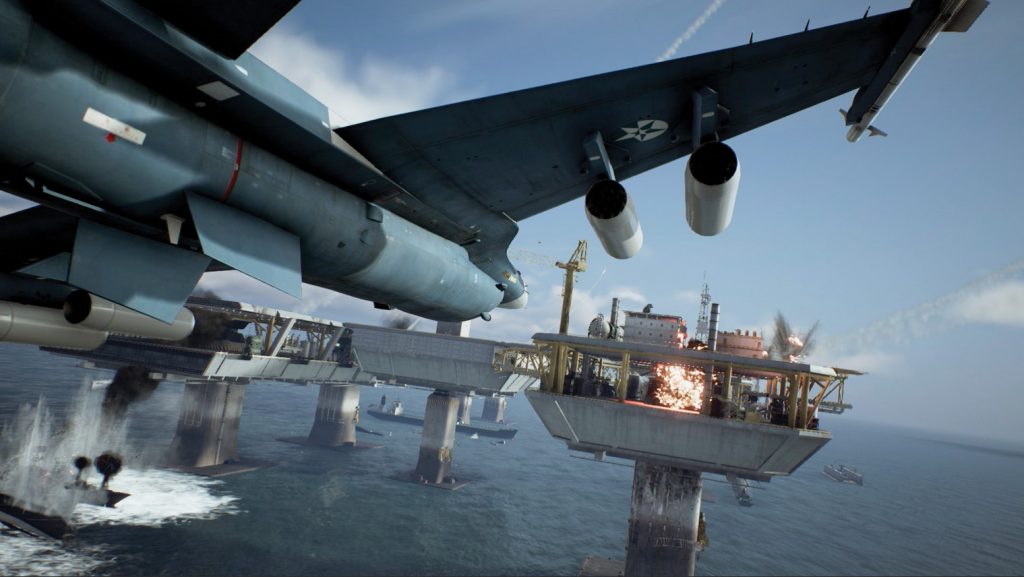 Speaking of tough missions, there’s definitely a noticeable difficulty curve as you progress, but it doesn’t get too overwhelming. Ace Combat 7 is great at putting you in your place whenever you feel like you’re too much of a hotshot for its challenges. The only real roadblock in the way is the partner AI, which occasionally borders on useless. Once you make peace with the fact that you may, at any given moment, be the only aircraft doing any real work in the skies, you’ll get used to becoming a one-pilot wrecking machine. For the best results, however, you’ll want to avoid the temptation to rush your way through the campaign. There were a few points throughout that I realized I needed to play previous missions over again to earn more MP and invest in upgrades and more powerful weapons. It made a major difference, but those in a hurry may find this light grinding to be a bit of a drag.

Beyond the impressive action and robust customizability, the secret best feature of Ace Combat 7: Skies Unknown will only present itself to those with VR access. A select few missions are compatible with PSVR, and putting yourself directly in the cockpit in virtual reality is a serious trip. The only downside to using this feature: It’s just going to make you want more. Regardless of how exciting it is, presenting a small handful of missions in VR seems like little more than a tease. Perhaps it can be chalked up to technical limitations or an issue with resources, but hopefully the next entry in the series has full campaign VR support as an option. 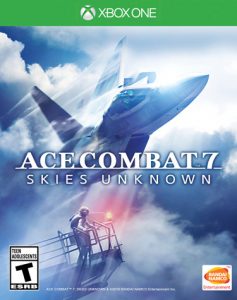 Even with some minor caveats, anyone who digs flight sims or arcade-style shooting should jump on Ace Combat 7 as soon as possible. It’s one of the more consistently engaging and thrilling dogfighting games on the market, and it’s a series I’d like to see continue for the foreseeable future. If one game isn’t enough, both console versions come with a couple of nice digital extras to keep your plate full. Purchasing Ace Combat 7 on Xbox One comes with a digital copy of Xbox 360 game Ace Combat 6: Fires of Liberation, while PS4 players will get digital access to PS2 entry Ace Combat 5: The Unsung War. Once you get comfortable in this cockpit, you’ll find it hard to leave.