Was Admiral Richmond K. Turner One of the Worst of WWII’s Leaders?

Although not commonly considered one of the worst leaders in history, Admiral Richmond Kelly Turner's shortcomings were behind one of the hardest defeats of WWII.

Historical controversy has famously surrounded Admiral Richmond K. Turner. In his responsibility as Director of the War Plans Division, he was to inform Admiral Kimmel, Commander of the Pacific Fleet, of Japanese diplomatic threats alluding to military retribution for souring political relations. Though information surrounding the subsequent Pearl Harbor attack would not come into question until after the war, allegations surrounding Admiral Turner’s negligence and disregard for communication within his chain of command would continue throughout World War II. Turner’s shortcomings would instigate what is seen as the U.S. Navy’s worst defeat in the South Pacific, and arguably in its history, at the Battle of Savo Island. 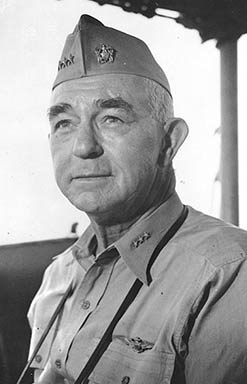 Following the initial invasion of Guadalcanal in August of 1942, the main Allied carrier force left the area for refueling and rearmament. The remaining American Naval forces, under the command of Admiral Turner, were positioned in screening formations to protect Marine transport ships. Allied ships were positioned west of Savo Island as an advanced warning force, guarding the entrance of St. George Channel, where Allied beachheads had been created.

On the morning of August 9th, a Japanese naval attack would wreak havoc on Allied ships protecting their transports. Though Allied ships were equipped with newly acquired radar systems, ill-trained crews mistook advancing Japanese forces for existing land formations. Japanese ships would easily enter the channel, sinking four Allied heavy cruisers, and damaging four destroyers within thirty-two minutes. American forces were untrained for cooperation with other Allied ships, partially because Admiral Turner had failed to implement the tools necessary to quickly relay a cohesive battle plan throughout the fleet. Turner’s command of American naval forces at the Battle of Savo Island was defined by general confusion and friendly fire, costing the lives of 1,077 Allied sailors during those fateful thirty-two minutes.

Turner would later blame the embarrassment of the Battle of Savo Island on a lethargic state of mind bred from the feeling of “technical and mental superiority over the enemy.” A Naval investigation would look into the ineptitude of American command at Savo, which had been a dose of reality for supposed American Naval superiority. “Terrible” Turner would not be censored by the investigation, but he would allow Captain Bode, a lower commander present at Savo, to become the scapegoat. Bode would later commit suicide in 1943. (Read more about the leaders of WWII and the deeds that made them famous inside the pages of WWII History magazine.)

3 thoughts on “Was Admiral Richmond K. Turner One of the Worst of WWII’s Leaders?”