To get the most out of a trip to the Battle of Gettysburg National Military Park, it’s necessary to spend more than just one day.

Walking along the Union line of battle at Gettysburg, whether on Little Round Top, Cemetery Hill, Culp’s Hill, or elsewhere is at times overwhelming. The sweeping vistas over open ground to the west and north are largely unspoiled by development. The stone monuments to Union units stand thick on the Gettysburg battlefield and the weight of their presence gives one a sense of awe, respect, and sympathy for those who fell in battle, as well as for those who somehow survived the terrible ordeal.
[text_ad]

How To Make the Most of Your Time

The challenge for the visitor to Gettysburg National Military Park is to tailor his or her visit in such a way as to make the most of his or her time. The three-mile long battle line over which many assaults occurred over three days, is far too much to absorb in just one day. At a minimum, the visitor should plan a two-day visit; longer if possible.

In the past decade, the National Park Service has worked hard to enhance the visitor experience. The Gettysburg visitor center was relocated in 2008 to a new location on Baltimore Pike that is easily accessed from U.S. 15. The 139,000 square foot museum houses 11 exhibit galleries, the world-famous cyclorama painting of the battle, and a large bookstore. Visitors who wish to hire a licensed battlefield guide can make arrangements to do so at the visitor center.

Gettysburg: A Key Crossroads in the War

Riding high from their victory over the Union Army of the Potomac at Chancellorsville in May 1863, Robert E. Lee led his Confederate Army of Northern Virginia north through the Shenandoah Valley into Pennsylvania in late June 1863. When he learned the Union army, under a new commander, Pennsylvanian Maj. Gen. George Meade, had reached Frederick, Md., and was moving north to confront him, Lee ordered his army to concentrate at the key crossroads of Gettysburg.

A meeting engagement on July 1 along Cashtown Pike turned into a large battle involving two of Lee’s three corps pitted against the Union I and XI Corps. The XI Corps, which recently had been routed at Chancellorsville, was once again routed on the northern edge of Gettysburg.

What Should the Confederates Have Done?

Many arguments about Confederate strategy continue to this day. For example, some believe, whether rightly or wrongly, the Confederates should have attacked Cemetery Hill the evening of July 1 and seized the high ground before the Union had a chance to occupy it in force. Lee’s attempt to roll up the Union left flank the next day failed, as did a night attack on both Cemetery Hill and Culp’s Hill.

The third day dawned with a failed major attack against the Union right at Culp’s Hill, followed by one of the most famous assaults of the Civil War, Pickett’s Charge, in which 12,000 Confederates, many of them Virginians, attempted to weather a storm of lead as they headed for the center of the Union line on Cemetery Ridge. 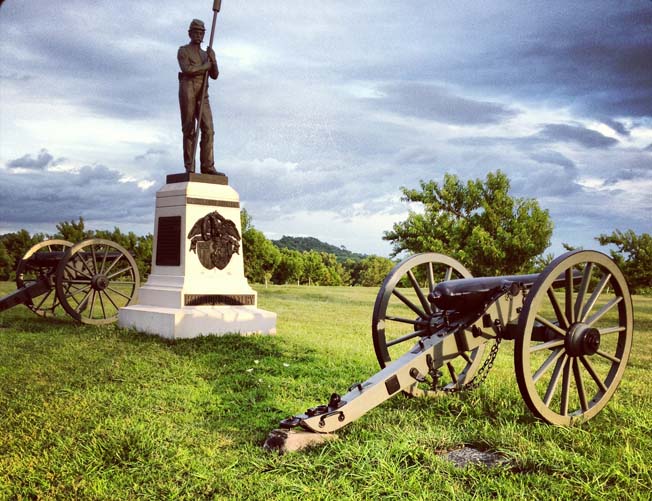 The 24-mile self-guided auto tour, which has 16 key stops, can be tackled at once, or more practically, in sections. The so-called High-Water Mark atop Cemetery Ridge, which was the objective of Pickett’s Charge, as well as Little Round Top, are heavily visited parts of the Gettysburg battlefield. Whether going for short visit or a long one, it’s worth visiting those two parts of the battlefield, as well as other parts associated with Confederate Maj. Gen. Longstreet’s I Corps’ attack on the Union left on July 2, such as The Wheatfield and Peach Orchard. The large Pennsylvania Memorial south of the High Water Mark is a good photographic subject.

Although McPherson Ridge, where the battle began on July 1, and Culp’s Hill where Maj. Gen. Richard Ewell’s II Corps assaulted entrenched Union troops on July 2-3, can be done as part of a one-day auto tour, they really merit more time to appreciate their significance in the battle and understand the nature and circumstances of the fighting in those sectors. The same holds true for Cemetery Hill, which like Cemetery Ridge, bristles with cannon that testify to the strength of the Union position. Unable to break the Union defenses, Lee and his men tramped with sad hearts back to Virginia.