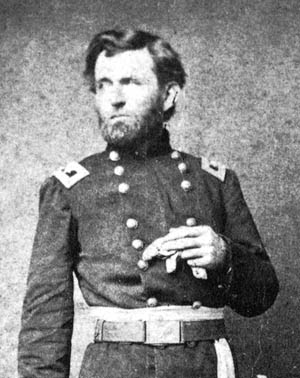 Ulysses S. Grant was working as a clerk in his family’s leather business in Galena, Illinois when the first shots of the American Civil War were fired.

The Confederate attack on Fort Sumter on April 12, 1861, marked the beginning of the American Civil War. Ulysses S. Grant was working as a clerk in his family’s leather business in Galena, Illinois. He would eventually become commanding general of the United States Army.

When the Civil War started in 1861, there were only two officers in the Union Army who had commanded a force in battle larger than a brigade. They were John E. Wool and Winfield Scott. At age 77, Wool was two years older than Scott and was showing the effects of his age. However, during the war, Wool served with distinction in the Eastern and Middle Departments. Winfield Scott was the general in chief of the army.
[text_ad use_post=”455″]

A major difficulty at this time was finding officers who were competent enough to organize, administer, and command large armies in combat. The vast majority of young officers—who had never seen a force larger than the 14,000-man assemblage Scott had commanded in the war with Mexico—had only limited experience in commanding small units. Most of these had attended West Point and, as a result, had been trained mainly in the areas of engineering, fortifications, and mathematics. Only a small portion of their schooling had been dedicated to strategic and tactical thought. At the same time, they received very little instruction on how to effectively administer an army or how to organize a group of officers for staff work.

As the Civil War slowly expanded into a major conflict, a number of officers began to demonstrate skills that allowed them to persevere through the early period of the war. Eventually the innate qualities that are so important for good leadership began to propel these men into significant positions of command. Ulysses S. Grant was one.

When Fort Sumter was attacked by the Confederates in April of 1861, Grant was a clerk in his family’s leather business in Galena, Ill. Within one week he began helping the local militia company organize its ranks, and he instructed its officers in proper drill procedures. He even designed the unit’s uniforms. But when the men in the company tried to elect him their company commander, he refused. Grant felt that the rank of militia captain was beneath him because he was a graduate of West Point and had been a captain in the regular army with an excellent combat record in the Mexican War. Realistically, he was holding out for something more worthy of his status.