Selfless acts of bravery saved lives aboard the USS Oklahoma during the attack on Pearl Harbor.

During the Pearl Harbor attack, both Utah and Oklahoma capsized after suffering multiple torpedo hits. Utah had been converted to a training ship, and to the Japanese pilots, her modified deck resembled that of an aircraft carrier.
[text_ad]

As the attack raged, Fireman Second Class John Vaessen stayed at his post in the ship’s forward distribution room, maintaining power for the ship as long as he could. His work kept the lights on and allowed many of the crew to find their way up and out. But when Utah had rolled 80 degrees to port, Vaessen was wounded and trapped. With a flashlight and a wrench, he moved to the very bottom of the ship on the starboard side and started banging on the hull.

Men who had swum from the ship to nearby Ford Island heard him. A search party led by Machinist S.A. Szymanski returned to the ship. The crew of the cruiser Raleigh lent them equipment to cut into the hull. Syzmanski’s team eventually reached Vaessen and brought him out. Sadly, he died of his injuries shortly after being rescued.

Anything But a Routine Monday

Oklahoma had been preparing for an inspection, which was to take place on the morning of Monday, December 8. As a result, many doors and hatches were wide open when the Japanese attack came. She was hit by at least four torpedoes on her port side. She had flooded so quickly that when the word came to abandon ship, not every man could.

Stephen Bower Young was one of them. He had joined the Navy in the summer of 1940, hoping to go to the Naval Academy. Less than five minutes after the attack began, Young and 10 of his friends were trapped in a compartment beneath the No. 4 gun turret, which, now inverted, was beneath the harbor’s surface. They remained there for 25 hours, with no power, diminishing air, and rising water. Praying someone would hear, they took turns banging on bulkheads with a wrench.

“The real effort to free us began sometime after 0100 on 8 December,” Young later wrote. “Sailors from Oklahoma and other ships and civilian workers from the Navy Yard brought in air compressors, pumps, chipping tools and torches alongside the part of the hull above water. It would be some time before [we] could hear their efforts to free [us]. We had no knowledge that any attempt at rescue was even being made until the first sounds of the air hammer were heard as dawn came over the islands.”

“It was mostly a Navy Yard effort,” said Young. “They had brought the blueprints and most of the equipment, and they knew what they were doing.” Twenty men from Yard Shop 11 began the exhausting job of cutting through bulkheads in different parts of the ship. In charge was Leading Man Julio DeCastro, a Honolulu native. He and two other men worked their way down toward Young and his friends. At each breakthrough, DeCastro listened for the sound of the banging wrench to determine their proximity to the trapped men. 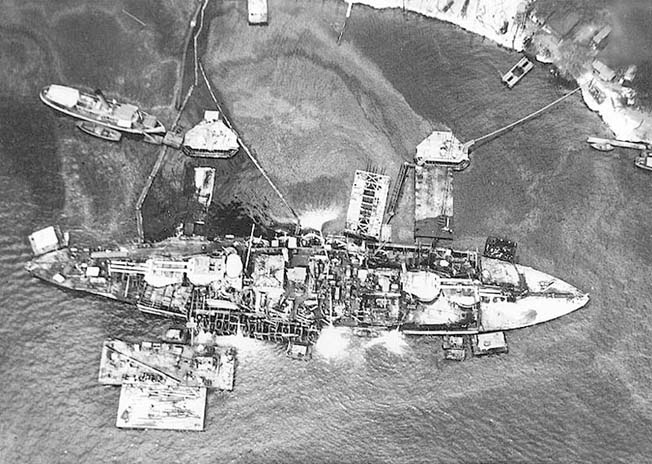 A full day after the ship capsized, Yard worker Joe Bulgo cut through to sailors in the No. 4 radio compartment. “There’s some guys trapped in there,” one sailor said, pointing to the wall behind him. “We’ll get ’em,” said DeCastro.

Young yelled to the rescue team on the other side. DeCastro’s calm voice came back, promising he would get them out. But he was worried about air pressure. Cutting through the bulkhead would release air from Young’s compartment, and water inside would rise. There was no choice. DeCastro drilled a hole, and air hissed through. “Hurry up! Burn us out!” one sailor screamed. “We can’t. You’d suffocate in there,” DeCastro told him. “Jesus, we’ll drown if you don’t!”

Young’s friends scrambled to close a waterproof hatch as Bulgo slashed into the bulkhead with the chipping hammer. As the rectangular cut grew, the water rose higher. The racket was staggering. The sailors gritted their teeth, trying to stay calm. Bulgo was 21 years old and strong as an ox, but this was the toughest pace he had ever set. After 60 agonizing minutes, he finished the third side of the cut. The water streaming through had reached his knees. By then, the Oklahoma men were ready to tear the metal away with their fingers. “Look out for your hands, boys,” Bulgo said. With a sledgehammer he pounded in the section of wall. The sailors scrambled through and were guided up and out by DeCastro’s men.

“It was a beautiful day,” recalled Walter Bayer, one of the thousands of civilians who worked in the Navy Yard. “And these poor guys had been down in that black hole. Completely en­tombed. And when the workers got them out, you should’ve seen it. It was just wonderful. There they were, out in the bright sun and fresh air. It was just like a new life.”

In all, 32 Oklahoma sailors were saved. For the rest of their lives, they had only praise for their rescuers. When asked 60 years later what kind of man Julio DeCastro was, Young said simply, “He was a leader of men.”