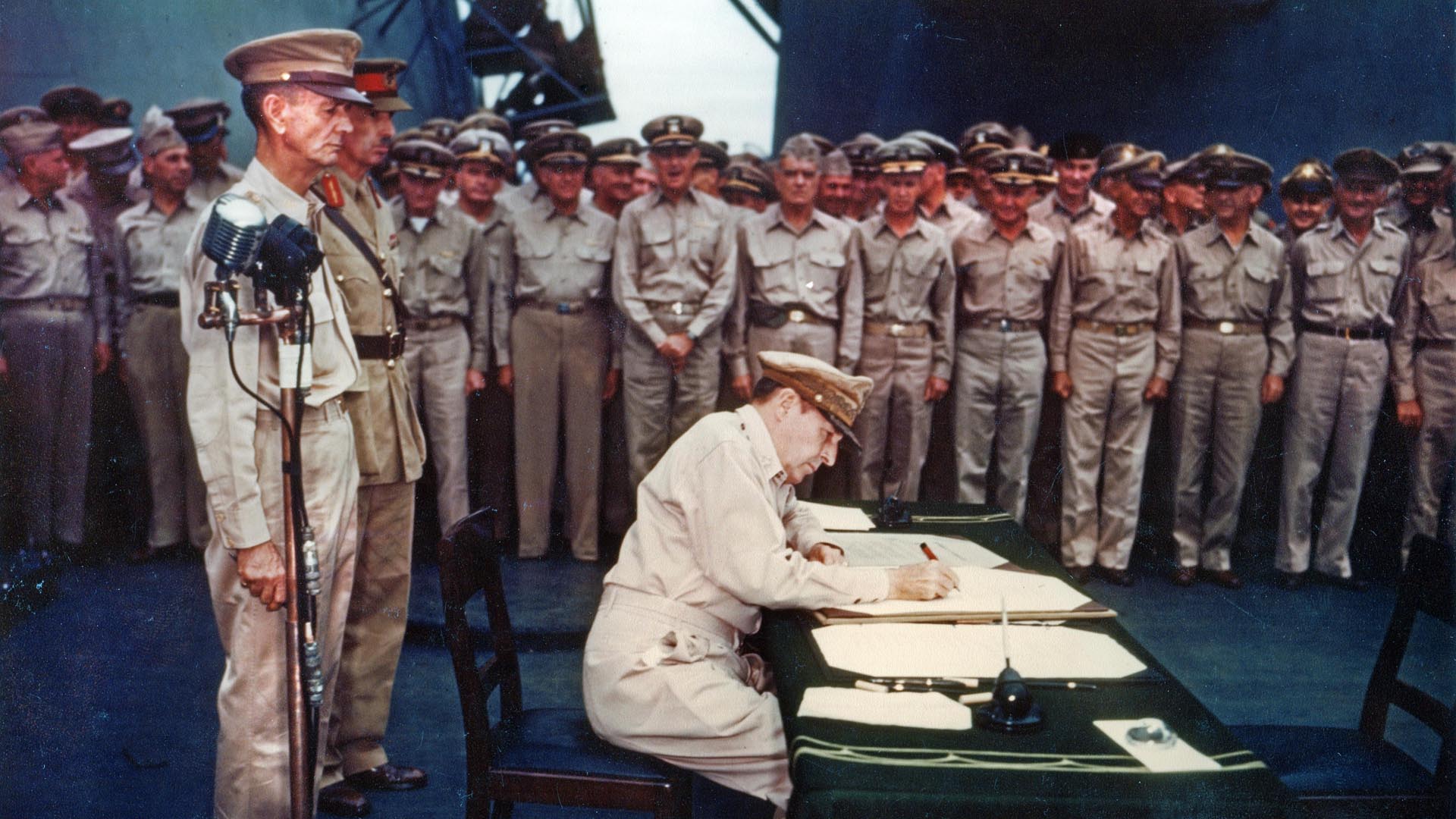 On May 6, 1942, in the Malinta Tunnel, Corregidor Island, General Jonathan Wainwright waited for the Japanese to respond to his surrender offer with a cease-fire. The courageous Army officer took the remaining time before entering into captivity to send a last message to President Franklin Roosevelt: “With broken heart and head bowed in sadness, but not in shame I report to Your Excellency that today I must arrange terms for the surrender of the fortified islands of Manila Bay. If you agree, please say to the nation that my troops and I accomplished all that is humanly possible and that we have upheld the best traditions of the United States Army. May God bless and preserve and guide you and the nation in the ultimate victory. With profound regret and continued pride in my gallant troops I go to meet the Japanese commander. Good Bye, Mr. President.”

The 59-year-old professional soldier had been promoted to lieutenant general and appointed commander of all American and Filipino forces in March 1942 just prior to General Douglas MacArthur’s departure for Australia. He graduated from West Point in 1906 and followed his father’s legacy by requesting assignment to the cavalry. General Wainwright was a combat veteran of World War I and was posted to the Philippines on the eve of war in December 1941.

Wainwright continued to lead American and Filipino forces in the battle for the Bataan Peninsula until overwhelmed by numerically superior Japanese units, forcing a withdrawal to Corregidor Island in Manila Bay where the fight continued for another month. Thousands of Americans and Filipinos were taken prisoner by the enemy and endured torture and appalling hardships for the next three years. General Wainwright’s captivity lasted 39 months and took him from the Philippines to Formosa, Japan, Korea, and ultimately Manchuria.

On August 6, 1945, an atomic bomb was dropped on Hiroshima, and three days later a second bomb was dropped on Nagasaki. By August 12, Japanese surrender seemed imminent. Both military and public concern now shifted to the welfare of Americans who had been taken captive during the early days of the war.

Many prisoners had already been freed with the liberation of the Philippines, but many were still not accounted for. Of special interest to Americans was the fate of General Wainwright. Allied intelligence was aware of several POW camps in North China and Manchuria and believed that Wainwright was held in one near Mukden, Manchuria. There was also evidence that other high-ranking Allied officials were held in the camp, such as General Arthur E. Percival, the former commander of Singapore. Despite Japan’s readiness to surrender, there were still over a million Japanese troops in North China and an entire army group in Manchuria.

The reaction of Japanese field troops to the surrender was unpredictable. There was a possibility of a POW massacre such as occurred in the Philippines prior to the raid on the prison camp at Cabantuan in which a force of Army Rangers, Alamo Scouts, and Filipino guerrillas stormed the notorious camp in January 1945.

Further complicating the situation for Allied planners was the declaration of war by the Soviet Union against Japan on August 8, 1945, which was followed by an invasion of Manchuria.

The Allies developed plans to insert OSS (Office of Strategic Services, the forerunner of the CIA) teams to liberate and protect Allied prisoners held by the Japanese. The six-man teams organized for rescue and humanitarian operations became known as Mercy Missions. Contact Teams had been used in Europe to assist in the liberation of German POW camps, but the operations in China faced a special challenge. There would be a significant lag time between the contact and rescue of POWs and the linkup with friendly ground forces.

Nine teams were organized for missions throughout North China and Manchuria. Of these, the Cardinal Mission became the highest profile operation. The mission launched a parachute drop of a carefully selected OSS team into Manchuria, 900 miles from the Allied headquarters at Chungking.

Major Robert F. Hennessy, a 27-year-old West Point graduate, was selected as leader. Major Robert F. Lamar, a 31-year-old physician, was second in command. In early August, Hennessy and Lamar, along with four other OSS men, parachuted into Manchuria in the vicinity of a prison camp at Hoten near the city of Mukden. Wainwright, however, could not be found. The camp commander advised the OSS officers that the general was held 100 miles to the north at the Sian POW compound. Hennessy directed Lamar and Sergeant Harold Leith, a linguist fluent in both Russian and Chinese, to travel to the Sian Camp and locate Wainwright.

“Are You Really an American?”

After a long and arduous nocturnal train ride, Lamar and Leith arrived at the Sian Camp on the morning of Sunday, August 19. The two OSS agents met with the camp commander, and after a short but confrontational discussion General Wainwright was summoned. A poignant meeting between the Americans occurred a few minutes later. General Wainwright suddenly appeared in the doorway of the commander’s office. The emaciated American hero stood silently in tattered clothing. The OSS men stared at each other with stunned disbelief.

Wainwright broke the silence. “Are you really an American?” he asked.

“General, you are no longer a prisoner of war. You’re going back to the States,” Lamar responded.

Wainwright, however, was conflicted. He had survived over three years of brutal captivity and was afraid of what his fellow Americans thought of him. Would he return to the United States in disgrace and live the remainder of his life in shame?

Wainwright responded slowly, his voice cracking with emotion, and asked the question he had agonized over for three terrible years. “What do the people in the States think of me?”

The tired old general nodded silently but was still not convinced.

Finding a Means of Escape

Lamar immediately tried to communicate the news to Hennessy in Mukden, but his radio was not working and the Russians had cut the telephone lines. The OSS officer felt the urgency to get General Wainwright and the other liberated prisoners back to Mukden for air evacuation to the safety of Chungking. Japanese units in the area were still armed and dangerous, despite the surrender of the Empire.

Lamar was afraid that General Wainwright and other high-status prisoners such as General Arthur Percival, the former British commander at Singapore, could be kidnapped by rogue Japanese or Russian units and used as hostages. The only course of action for Lamar was to return by train to Mukden and come back to Sian with a convoy of transport vehicles. He estimated his return time to be two days. Leith, because of his fluency in Chinese and Russian, was left with General Wainwright.

Three days passed without the arrival of Lamar and the rescue convoy. The general feared that the OSS officer had been killed before he was able to report the location of the liberated prisoners. Lamar had arrived in Mukden, but the Russians were now in control of the city and on a drunken rampage. The Soviet military had no interest in assisting the Cardinal team in the rescue of the freed POWs. Hennessy and Lamar were powerless to obtain the needed vehicles from the uncooperative Russians.

Meanwhile, General Wainwright and the other prisoners were gripped by frustration and desperation. They were technically free but were still confined to their prison. Ironically, the prison wire now provided some protection from rogue Japanese infantry and uncontrolled Russian troops.

On the afternoon of August 24, the prisoners’ emotions soared as a column of American- made vehicles approached the compound. But, as the convoy got closer, large red stars were spotted on the trucks. It was a Russian unit driving U.S. Lend-Lease equipment.

General Wainwright greeted the Russian commander and, using Sergeant Leith as a translator, requested help in getting to Mukden. The Russian replied that his unit was going to Mukden and the liberated prisoners could join them if they provided their own transportation.

The old general reflexively reverted to his precaptivity command personality and quickly organized the liberated POWs while giving orders to his former captors to obtain the needed transportation. By 6 pm, the Russian convoy rolled out of the Sian prison camp with General Wainwright’s contingent. The freed prisoners hoped to be in Mukden the following morning. However, the Russian commander became lost on the Manchurian backroads. Adding to the problems, a torrential rainstorm struck on the afternoon of the 25th, turning the roads into a muddy quagmire.

The prisoners’ vehicles became stuck in the thick mud, and the Russians threatened to leave them. However, a rail line was discovered nearby and a short time later a small engine pulling three cars appeared. The Russian commander wanted to rid himself of the POW burden. He halted the train and forced the Japanese crew at gunpoint to take General Wainwright and his group. Misfortune quickly followed. The engine jumped the track a short distance from the Russian unit. The frustrated commander stated that he had to continue on but would send help. Wainwright and his exhausted comrades spent a sleepless night in the small passenger cars.

The Russian officer kept his word. He commandeered another train and sent it back to pick up Wainwright’s group. Eventually, the exhausted but liberated prisoners arrived in Mukden at 1:30 am on August 27. The 100-mile trip had taken three days.

Meanwhile, U.S. Army headquarters in Chungking feared the worst. Lamar and Hennessy had reported the situation and the response was to send search aircraft over Manchuria for signs of Wainwright’s party. Nothing was seen from the air. The worst fears of the Chungking headquarters and the Cardinal team had apparently come true. Wainwright was thought to be a hostage of the Japanese or Russians. Leith quickly left the train and reported to Major Lamar. The OSS officer found General Wainwright at about 3 am and informed him that two planes were waiting to fly him, General Percival, and a selected group to Chung-king.

In Chungking, the general was awarded the Distinguished Service Medal. Tears rolled down his sunken cheeks as the citation was read. On the August 31, Wainwright landed in Yokohama to meet with General MacArthur. Wainwright was apprehensive, fearing his old commander’s reaction to the general who had surrendered American armed forces to the Japanese. When MacArthur spotted the weary old soldier, he rushed across a crowded dining room and embraced him. The tough veteran soldiers fought back tears, and spoke in whispers for several moments. 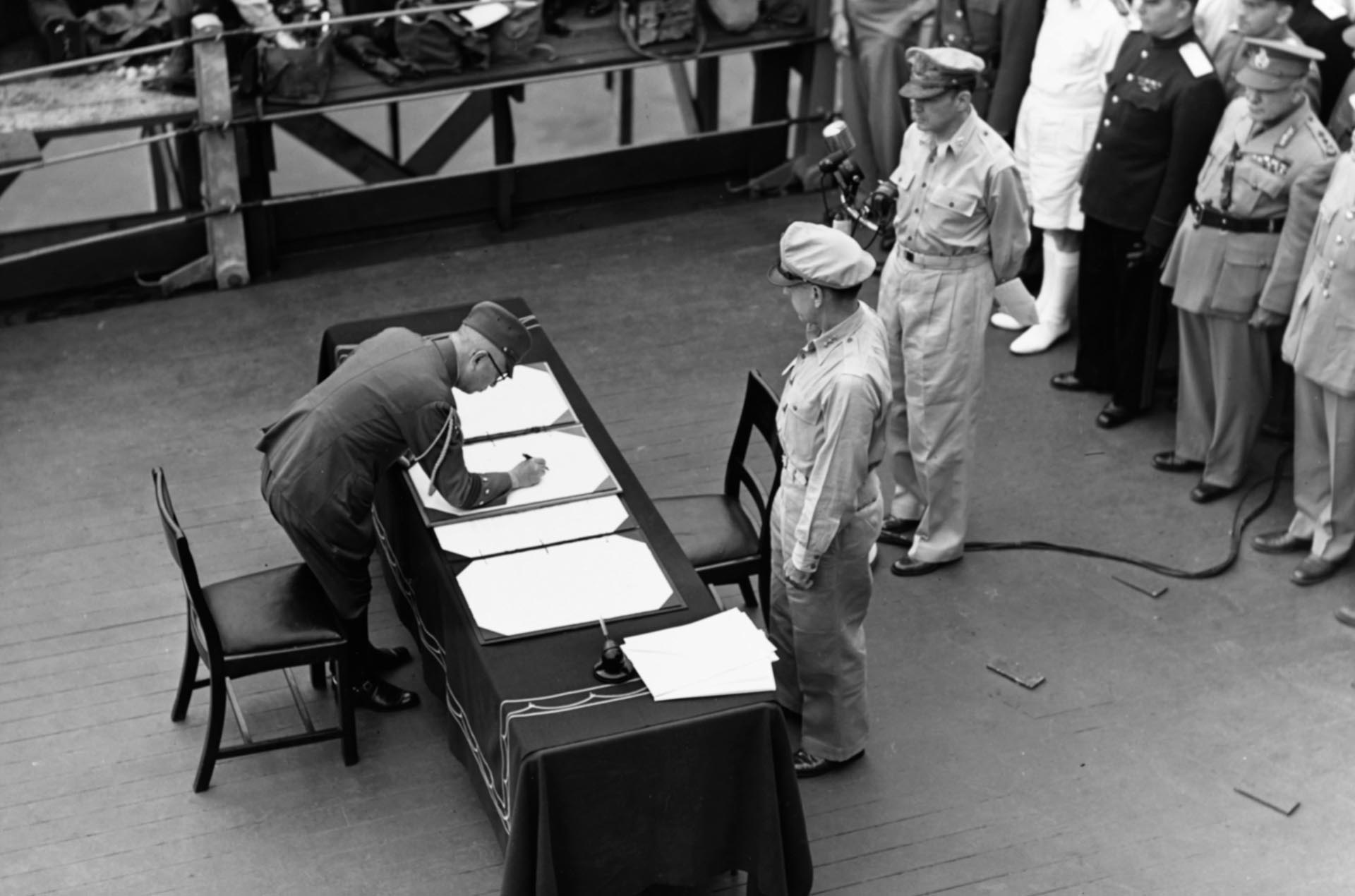 General Wainwright’s final vindication came on September 2, 1945. Approximately 250 American warships lay at anchor in Tokyo Bay. Aboard the battleship USS Missouri, MacArthur stood by a small table with Wainwright and Percival in positions of honor slightly to his rear. He solemnly directed the representatives of the Japanese Empire to come forward and sign the formal articles of surrender.
When they had finished, MacArthur sat down and signed the document. He gestured to Wainwright to come forward and accept the pen. A second pen was handed to Percival.

General Wainwright received his fourth star and was awarded the Medal of Honor. He remained on active duty until his retirement in 1947. He died September 2, 1953, eight years to the day following the formal Japanese surrender.

A veteran of the U.S. Army Medical Corps and the Marine Corps Ready Reserve, John Mancini is an instructor at a community college in Sierra Vista, Arizona.