The “George Medal” and Guadalcanal

The highly unofficial 'George Medal' was a tongue-in-cheek response to the deadly serious combat at Guadalcanal.

In the long and distinguished history of the U.S. Marine Corps, thousands of marines have been awarded medals for meritorious service on the battlefield. One medal, however, will never show up on the list of officially approved decorations—the George Medal. It was a tongue-in-cheek response to the deadly serious combat on Guadalcanal during World War II.
[text_ad]

In the early morning hours of August 7, 1942, leathernecks from the 1st Marine Division stormed ashore on the Japanese-held island of Guadalcanal in the first major American ground offensive in the Pacific Theater of World War II. Japanese reaction was swift and violent. The day after the landing, 50 twin-engine torpedo planes struck the transport USS George F. Elliott (AP-13) and the destroyer USS Jarvis (DD-393), sinking both. Hours later, at approximately 1:30 am on August 9, elements of the Japanese 8th Fleet attacked the American and Australian screening force, sinking four cruisers and badly damaging a fifth. With the smoke from burning ships as a lurid backdrop, the Navy abruptly withdrew, taking with them vital supplies and ammunition and leaving the marines effectively stranded on Guadalcanal.

Reaction among the marines ranged from outright anger to biting sarcasm. The late Lt. Gen. Merrill B. Twining, then a lieutenant colonel and operations officer with the 1st Division, once remembered, “One night on Guadalcanal, a group of us were discussing our situation. It didn’t look good. We lacked support, chow, ammo, and just about everything else except Japs. That’s when I suggested a medal designed to commemorate the campaign, some-thing akin the Marine Corps Expeditionary Medal and that would be called the ‘Let George Do It Medal.’” The phrase was synonymous with the division back in the United States, Twining noted. “Anytime there was a job that no one else wanted to do, Head-quarters Marine Corps assigned it to the 1st Marine Division. Soon, some senior officers referred to the division as the ‘Let George Do It Division,’ and it became a common term. If you had a job to be done, call up the ‘George (1st) Division.”

The group decided that the medal should have an appropriate Latin inscription and called upon famed Australian coastwatcher Martin Clemens to translate one for them. “He gave us a sharp look,” Twining recalled, “but then we explained that our ‘George’ had nothing whatever to do with King George V, and I explained the idea of our medal. Martin was delighted and suggested the words, ‘Faciat Georgius,’ a loose rendering of ‘Let George Do It.’” Captain Donald L. Dickson, adjutant of the 5th marines and an artist for Leatherneck magazine, was brought into the picture to complete the plan. Using a 50-cent piece, Dickson drew a circle on a blank captured Japanese military postcard and sketched in the ironic designs.

“Hauling Ass Without Turning Around”

Twining’s group had decided that the obverse side of the medal should have an outstretched hand with Navy stripes on the lower sleeve, dropping a hot potato in the shape of Guadalcanal into the hands of a tired, less than grateful Marine. They also discussed the idea of depicting a transport ship with a stern on each end so that it could “haul ass without turning around.” According to Brooke Nihart, chief historian of the Marine Corps Historical Center, the original design of the sleeve bore the stripes of a vice admiral, intended to be either Vice Admiral Robert L. Ghormley or Vice Admiral Frank Jack Fletcher, the Navy commanders for the Guadalcanal operation. But cooler heads prevailed, and the final medal diplomatically omitted this less than flattering identification. Also depicted was a Saguaro (barrel) cactus representing the military code for the Guadalcanal campaign; Oper-ation Cactus.

The back side of the medal depicted a cow with its tail uplifted toward a whirring electric fan, suggesting something “hitting the fan.” (The original design showed a Japanese soldier caught with his pants down, Nihart said.) It was a pictorial representation of the marines’ typical response to a heavy attack. An inscription beneath the earthy scene read, “In fond remembrance of the happy days spent from Aug. 7th 1942 to Jan. 5th 1943. USMC.”

To hang the medal, some marines employed the oversized safety pins used to close laundry bags aboard ship, while others used a thin metal clasp or bandolier pin. Twining suggested that the ribbon be made of the pale green herringbone twill from the marines’ utility uniforms. He thought that even the Corps’ legendarily parsimonious quartermaster would approve that design because of the obvious economy involved in providing the material. To be considered truly authentic, the material had to have been washed in the Lunga River at Guadalcanal.

When the badly used-up division returned to Australia in early December 1942, Lieutenant Herbert C. Merillat, the division press officer, attempted to get a local firm to cast the medal. “Everything went nicely,” he said, “all arrangements were apparently made, when I learned that the firm of engravers couldn’t take on the job unless an official request was made. The engraver said he might otherwise get into trouble with the manpower board, because his men were exempted from the draft on the grounds they were doing war work.” Twining, the most ardent promoter of the medal, said he couldn’t sign the request formally and suggested letting the matter rest for a while. No other senior officer seemed to want his name associated with the project in any manner whatsoever.

So Who Made Them?

There is no record of who finally accomplished the actual task of getting the medal made. Retired Marine Major Rick Spooner thinks that the Luke Jewelry Company of Melbourne might have produced the medal. The company then was contracted to make Marine Corps emblems that were in short supply, and it would have been easy enough for them to sneak in production of the George Medal on the sly. No paperwork exists, however, to confirm Spooner’s supposition. 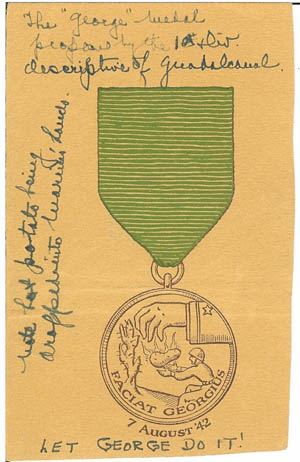 In mid-May 1943, 2nd Lt. John C. Schiller, Jr., of the division’s intelligence section was designated officer in charge of collecting money for the medal. Its cost, one Australian pound, included an “official” certificate. Headquarters and Service Company, 7th Marines, published a memorandum “to all present when it hit the fan,” announcing that “a limited number of Faciat Georgius (Let George Do It) medals which wags of the 1st Marine Division are presenting to themselves are available.” Lieutenant Frank Farrell, regimental intelligence officer and a well-known columnist for the New York World Telegram, was assigned to handle the details of the medal’s distribution. Forty-five members initially signed up, most of whom were officers or senior enlisted men.

The published memorandum included the formal wording of the scroll. Under the centered legend, “Faciat Georgius/(Let George Do It),” the citation read: “This is to certify that ___ of ___ was serving on Guadalcanal from ___ to ___ 1942, that he has thus in large part fulfilled the conditions laid down in Circular Letter No. 00-00, having been there when the [stuff] hit the fan, and that he is hereby awarded the George Medal of the First Marine Division, to which he is entitled as one who did his share upon the rock.” Major, later Colonel, James E. Buckley, G-2 of the division, signed both Clemens’ and Farrell’s citations as grand master of the Order.

Unlike officially recognized awards, there was no solemn ceremony to mark the bestowing of the George Medal awards. Twining was sitting in his office one day when two junior officers entered and, after observing the usual military courtesies, handed him a brand new George Medal—no flowery language, just a simple, “Here is your medal, sir.” Years later, Twining still did not know who had made the casings and thought it best he didn’t know, in case the Navy brass bore grudges. Rear Admiral Samuel E. Morrison, the noted naval historian, later dropped by Twining’s office to see his medal and was duly amused, but did not make an issue of it. The Old Breed, a history of the 1st Marine Division in World War II, notes ambiguously, “The details of how the George Medal was manufactured in Australia must remain a secret.” “I have been been told,” one medal holder said confidentially, “that the metal with which they were made was not honestly come by.”

Currently, there is some discussion about naming the former 5th Marine cantonment at Camp Pendleton, home of the 1st Marine Division, the George Area. If the designation comes to pass, today’s leathernecks will share the proud heritage of the marines who served during those dark days on Guadalcanal.

There were as few as 50 or as many as several hundred brass medals produced before the original mold broke. No one is sure of the exact number—Farrell’s citation is numbered 380. The Marine Corps Museum has what it believes to be a second mold, which also produced an unknown number of slightly larger medals. The great demand for World War II Marine memorabilia, combined with the comparative scarcity of the medal, has caused its value to steadily increase. Today, an authentic George Medal will fetch between $1,200 and $1,500 on the open market, or more if it is part of a grouping and can be traced to a particular veteran. In recent years, second-rate reproductions have appeared, easily identified by the different metal and poorer definition of details. The author was told by a local collector that two George Medals appeared for sale recently on eBay and reportedly sold for several hundred dollars each.

Not to be Confused With the British George Medal

The marines’ George Medal should not be confused with Great Britain’s George Medal, which was created in 1940 by King George V to honor civilian heroism on the home front during World War II. It is, however, similar to other unofficial military commendations, including the Soochow Creek Medal awarded for the defense of the Shanghai International Settlement during the Japanese invasions of China in 1932 and 1937, and the Military Order of the Dragon, commemorating American service in the Boxer Rebellion at the beginning of the 20th century.

For the Marine veterans who earned their own George Medal, it is a priceless remembrance of “those happy days” on Guadalcanal. General Twining, who won numerous awards during his 36 years of service, always considered the George Medal his most prized possession. Apparently, he was not alone.