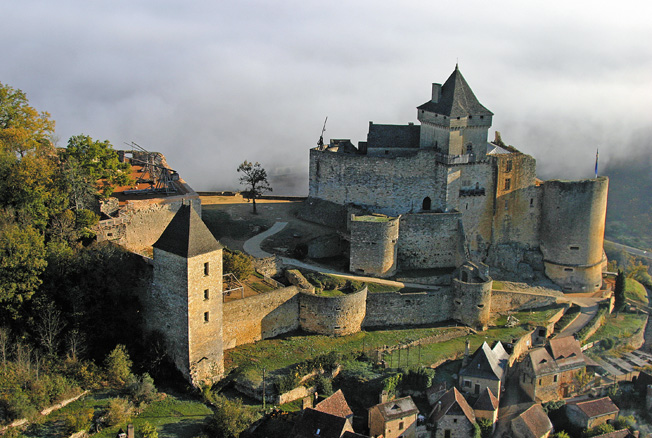 The Chateau de Castelnaud’s Museum of Medieval Warfare houses the largest such collection in all of France. Read all about it below.

For the last eight centuries, the Chateau de Castelnaud has stood sentinel on a great limestone outcropping 525 feet above the Dordogne River in southwestern France. The chateau’s history is a complicated, sometimes bewildering one, not unusual for this area of France, medieval Aquitaine. As was common with numerous castles of the Middle Ages, Castelnaud was many things at once—a residence, a refuge, a political headquarters, but most of all, Castelnaud was a citadel.

Castelnaud enters the historical records in 1214 ad, when the Albigensian crusade—as much political as religious—was at its apogee. Castelnaud’s lord, Bernard de Casnac, was a fervent supporter of the Albigensian Cathars, whose dualistic beliefs and humble rituals found broad support in the southwest of France, a region fiercely independent and proud of its own language, culture, and politics. The Catholic Church’s attempt to convert the heretics back to the fold by gentle persuasion had enjoyed little success, so Pope Innocent III called for force to be turned against them. Armies from Normandy, Picardy, and Burgundy, as well as from Flanders and the Rhineland, rallied to the south, many serving under the leadership of the fearsome Simon IV de Montfort, a half-English French nobleman who was appointed by the pope to crush the enemy. Montfort took Castelnaud, and a year later, Casnac retook it. Not long afterward, the castle was burned down, perhaps by Greek fire, the medieval precursor to napalm (naphtha was the secret ingredient), which had first made an appearance in Europe about this time.

The pattern of shifting ownership and authority over Castelnaud was repeated during the following decades, especially during the Hundred Years’ War, when the rebuilt and expanded castle changed hands no fewer than seven times. Ultimately, in 1442, the reigning king of France, Charles VII, ordered Castelnaud be taken. Nobles from the surrounding region succeeded in capturing the stronghold after three weeks of siege. The defending English captain, Pascal de Theil, gave up the keys to the chateau in exchange for his life to be spared. Documents note de Theil was impressed by the size of the French forces brought against him and the specific presence of two war machines: a bride (bridle) and a loup (wolf). The former was probably a pet name for a powerful trebuchet that was often given different monikers, including “the Earthquake’s Daughter” and “Bad Neighbor.” The wolf—perhaps a reference to the jaws of both the animal and the machine—was most likely another kind of projectile weapon.

Although neither of these particular engines of war has survived, the Chateau de Castelnaud is home to the largest private collection of medieval arms and armor in France. “For years nobody was interested in the technical military aspects of medieval culture—certainly not French historians,” explains Kleber Rossillon, the current owner of Castelnaud. (His parents bought the castle—in a ruinous state—in 1965, and with the assistance of a dozen different architects spent decades restoring it). Rossillon, trained as a military engineer in aeronautics, responded to such a void by establishing the Museum of Medieval Warfare 21 years ago. Today the collection consists of 180 items, all from continental Europe. The museum doesn’t present the material in strictly chronological order; rather it connects arms and armor thematically, and as much as possible relates the contemporaneous military architecture with the attendant weapons of that era. Emphasis is strongly tilted toward siege warfare.

One enters the museum by way of a 16th-century artillery tower whose lower walls measure an impressive 16 feet in width. Within the tower are the artillery pieces used to breach such substantial fortifications, including primitive and temperamental iron bombards which ever so slowly, fired 200-pound stone balls at the rate of one ball per hour, veuglaire cannon equipped with moveable chambers, which allowed more rapid loading, and two very fine organ guns. One of these organ guns, dating from the 16th-century, has 12 gun barrels, each two feet long, from which lead balls could be sprayed over a wide area. The organ engine is mounted on a wooden gun carriage reconstructed from a sketch by Leonardo da Vinci.

Photographic reproductions of illuminated manuscripts of actual battles grace the walls throughout the museum. Often the weapons in the manuscripts are exhibited directly below, a welcome and useful congruence. One of the rarest pieces in the collection is found in the next room, the armory. This is a handsome incised German sallet in an excellent state of preservation dating from the end of the 15th-century sporting a havelock (an accentuated neck protector), along with a moveable visor. Given its weight—more than five and a half pounds—it is difficult to believe that it was used primarily by crossbow archers, but it was. Nearby, more primitive mail shirts and mail hoods are displayed. Mail makers forged, flattened, riveted, and soldered open rings according to different assembling techniques, resulting in distinct styles of shirt. One of the mail coats (circa 1500 ad) contains around 56,000 brass links. Its survival is undoubtedly a result of the material it was made from, since rust-prone iron was more commonly utilized. Mail was valuable and, as the Bayeaux Tapestry shows, it was not uncommon for fallen soldiers to be stripped of such armor by other soldiers.

During the summer months, the castle hires a master armorer to make replicas of the plate armor created 500 years ago. His clanging can be heard throughout the chateau complex. The all-important and imposing donjon/keep houses the majority of the collection, including a diverse grouping of swords, daggers, crossbows, axes, ceremonial objects, breastplates, hammers, shields, catrops, and traps. Sometimes the most prosaic objects can be as instructive in their own way as the most esoteric. For example, a side-by-side exhibit displays a dozen or so common and various medieval agricultural tools next to the numerous iron pikes and halberds they were transformed into, via adaptations, over time. In this way, the biblical injunction to beat swords into plowshares and spears into pruning tools was turned precisely on its head.

Examples of such adaptations include the common serpe, with a bill hook used primarily for cutting tree limbs metamorphosed into the guisarme, a staff weapon with a very long (eight feet) shaft and an asymmetric blade head used mostly by infantry. The familiar scythe morphed into several instruments, including the faux de guerre, which looks just like what it says it is—a scythe of war—and the fauchard, which was used to strike and thrust as well as cut. As a general rule, most of these polearms were multi-task weapons incorporating a variety of spikes, blades, hooks, or points on one instrument. There are even examples of bells being attached to the hooks on some weapons to scare enemy horses. During the early 16th-century, edicts were enacted forbidding blacksmiths, under penalty of death, from transforming such tools into weapons. Obviously, they continued to ignore such commandments.

The medieval sense of humor, not something we know much about, sometimes reveals itself. One 16th-century halberd, for example, sports a hook in the shape of a man with a Pinocchio-long cartoonish nose. A scary-looking object in one of the cases, a ball-and-chain flail consisting of a wood-handled shaft attached to a flap of iron with balls themselves containing spikes, was called a “holy water sprinkler.” It is doubtful it made many religious converts that way, but it definitely made an impact. References to the terrifying effect of this type of instrument, which could puncture body armor, entered the public consciousness; one of the most feared and infamous infantry in the 15th-century was a detachment of Hussite soldiers known as the “flailers.”

Castelnaud is unique in its emphasis on engines of war. The first man-powered machines using the catapult principle to throw missiles were invented by the Chinese in the 4th-century bc, but it was during the Middle Ages that torsion and counterweight machines were developed and refined. “Because original artillery engines have not survived over the centuries it was necessary for us to analyze medieval iconography, first to draw up blueprints of the machines and then to prepare versions in their full size dimension, able to fire on ranges laid out for that purpose,” explains Rossillon. Other sources used include treatises from military engineers such as Villard de Honnecourt’s 13th-century Notebook of Notes and Drawings and Conrad Kyeser’s Bellifortis a century later.

The chateau museum begins first by displaying a series of small-scale models of these machines (1/10 and 1/20 size), along with explanatory texts. The exhibit starts with the rustic pierriere (also petrarie or pedrero), with its lightweight balancing pole, which could not throw far but could fire two shots a minute. For all its primitiveness, it was a stone ball from just such a pierriere that killed the aforementioned Simon de Montfort at the siege of Toulouse in 1218.

Subsequent and more effective machines include the couillard, with a range five times that of the pierriere; the mangonel, with a fixed counterweight; and the most powerful of all, the trebuchet. The trebuchet’s use of counterweights suspended from hinged joints increased the amount of energy that could be delivered and therefore projected, making it an extremely strong machine. One such trebuchet conceived by Villard de Honnecourt had a 30-ton counterweight and was capable of throwing missiles weighing 350 pounds over a distance of more than 900 feet. The most powerful trebuchet could launch material weighing more than one ton.

But heft wasn’t everything, and missiles weren’t always common stones or shot. In 1345, in an early example of biological warfare, during the siege of Jaffa, a Genoese outpost in the Crimea, the opposing Mongol army launched plague victim cadavers over castle walls. Some scholars believe the Black Plague entered Mediterranean ports directly as a result of this horrific, yet imaginative, action.

Siege machines were not used casually. They were enormously expensive to build and required considerable personnel, including engine masters, stretchers, carpenters, and dozens of masons, rope makers, ball makers, and blacksmiths. During times of war, machines could be rented and transported to battle sites. For the siege of Cherbourg, a dismantled trebuchet required 30 carts and one wagon for the beam alone.

Consistent with the museum’s emphasis on educating through practical rather than merely theoretical examples, over the past two decades it has built and demonstrated the capabilities of many of its siege machines. The latest, built in the summer of 2005, was a three-quarter-size mangonel based on Murda al-Tarsusi’s detailed treatise on military equipment written for the 12th-century Muslim leader Saladin, along with other sources. The most important surviving technical manual regarding these siege machines is undoubtedly another Arab manuscript, Kitab aniq fi al-manajaniq (An Elegant Book on Trebuchets), written three centuries later. “The carpenters had never built a machine like this,” explained Rossillon, “but they had the technique.” Perhaps it was something in their ancestral blood, for the team that built the mangonel was composed of men who were carpenters working for the nearby town of Sarlat’s major coffin builder.

The chateau and museum are opened every day of the year. For more information, contact: Chateau de Castelnaud, 24250 Castelnaud-la-Chapelle (Dordogne). Visiting hours vary according to the season. Guided visits in English are available. The Web address is www.castelnaud.com.