Stripped of the regalia and high position of Reich Marshal in the Nazi regime and tried as a war criminal, the former Luftwaffe chief was by far the most colorful and outspoken defendant during the postwar proceedings.

At the end of World War II, Hermann Göring did not try to slip into hiding like many of Nazi Germany’s former leaders. In fact, he sought out the Americans on May 7, 1945, under the mistaken belief that he would be granted an audience with General Dwight D. Eisenhower.

Göring was confident that he would be treated as a spokesman for a defeated nation but, far from being an emissary for his people, he soon found himself regarded as a common prisoner of war. Flown to the modified confines of the Grand Hotel of Mondorf-Les-Bains in Luxembourg, he joined 50 other former Nazi ministers, officials, and high-ranking officers.

The Americans were surprised to find that Göring weighed over 260 pounds and was obviously in poor physical condition; he could have a heart attack at any moment. The Allies, who had already lost some key Nazi leaders to suicide, immediately put him on a strict dietary regime to reduce his weight and a withdrawal program to break his drug habit. Göring, a man who had enjoyed the fine life when in power, was hardly receptive to the prison fare put in front of him, but in time even he acknowledged that his health had rapidly improved.

As the inches vanished from his ample waistline and the fog of drug addiction cleared from his system, a rejuvenated Göring regained a mental drive and energy not evident since the early days of the party. In his self-imposed role of Primus inter pare at Mondorf, he called for a united front to shield Hitler from condemnation but, with little solidarity among the prisoners, his demands were completely ignored by most. There were those, however, who rallied behind the Reich Marshal, believing the affable Göring could perhaps negotiate their release. It was a forlorn hope, as most would soon find themselves indicted for war crimes.

When the U.S. Army formalized the list of 22 principal defendants, Göring was delighted that his name appeared at the top, but others could not understand why their names were there at all. They still had not grasped that the lenient treatment afforded Germany’s leaders after World War I would not be repeated in 1945.

On August 12, Göring and the other accused men arrived in the shattered ruins of Nuremberg to stand trial. Bustled into the detention block alongside the Palace of Justice, the disorientated former leaders were thrown into small, spartan cells that were little more than low-ceilinged cubicles. Under the governance of the dour U.S. Army Colonel, Burton C. Andrus, security in the prison would be rigidly enforced. To this end, every conceivable device that could aid a suicide attempt had been removed; even the flimsy table provided to write letters and notes was designed to collapse under the weight of a small man.

Faced with a bleak and uncertain future, many of the inmates had great difficulty adjusting to these new surroundings. Even Göring’s indomitable spirit was temporarily dented by the unaccustomed squalor, but his will to resist had not diminished and he soon confounded prison authorities by steadfastly refusing to clean his cell. Threats and intimidation made no impression on him, and eventually Andrus was forced to have a prison employee carry out the menial task. In Göring’s opinion, even a small victory was better than no victory at all, and he was very proud to have ruffled the feathers of his captors.

At the Nuremberg Trials, Reich Marshal Hermann Göring Was a Difficult Man to Dislike, and to Question

In Nuremberg, the prisoners were interrogated in earnest prior to the trial, but Göring was the only defendant who willingly participated in these verbal jousts. The former World War I fighter ace, who had been at Hitler’s side since the 1920s, was not only an economic and military leader but also Hitler’s heir apparent. He expected to yield an invaluable insider’s perspective on Germany’s political and military strategies. His engaging manner, charm, and raw sense of humor appealed to many who questioned him and, despite his brutal reputation, most found it difficult to dislike him. However, he proved a difficult man to question. 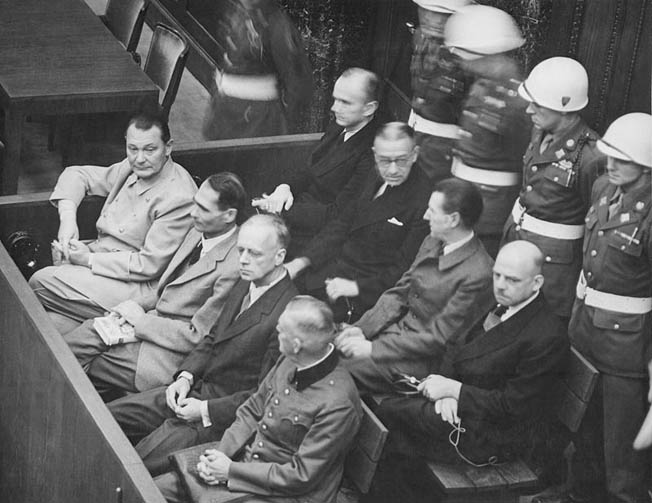 Göring spoke quickly and a lot, but his answers were only couched in general terms. His questioners soon came to realize that he was no fool and certainly nothing like the ridiculous, comical figure portrayed in Allied newspapers. they, like many others, found Göring to be a very shrewd individual blessed with a keen intellect and worthy of wary respect.

The leaders of the Reich, he told his interrogators, were a group governed by common loyalties and a common ambition to revive German fortunes, and Hitler had held this unruly gang together by the force of his will. Göring was often the man who had the final word on most matters, not necessarily the first. Although cagey with specifics and often scant on details, Göring in no way diminished his role in the machinations of the Third Reich or his loyalty to Hitler’s vision of a greater Germany. Hitler’s once-faithful paladin did concede, however, that he had been against going to war with England and viewed the invasion of Russia as inevitable, but premature. 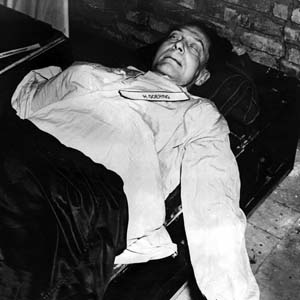 Life for the prisoners in the eerie silence of solitary confinement was harsh and soul-destroying. The gloom that pervaded through the cold stone walls of the detention block did not, however, appear to have washed over Göring. Much to the annoyance of the other inmates, he was often loud, habitually bombastic, and always defiant. The sight of the Reich’s former leaders submissively bowing to the will of their captors infuriated him. In his mind, adopting a visibly repentant demeanor would in no way help their cause before the court. They were already guilty regardless of their conduct in prison.

Resolute to the Last

It became a point of honor that the Reich Marshal rarely took a backward step and would not allow a victor’s judgment on Germany to pass unchallenged. A comment condemning his nation’s wars of imperial conquest received a typically scathing reply: “Don’t make me laugh!” he roared, “America, England, and Russia have all done the same thing to promote their own national aspirations but when Germany does, it becomes a crime—because we lost.” (Read more about the downfall of Nazi Germany and how the Allies achieved their victories in the European and Pacific Theaters inside WWII History magazine.)