The Polish Embassy responds to CNBC Host Jim Cramer's joke about "Polish cavalry against German tanks" and sets the record straight on an age-old myth.

Jim Cramer, host of CNBC’s Mad Money show, made a mistake on May 11th when he jokingly parroted a common misconception about the German invasion of Poland.

“Macy’s is like the Polish Army in WWII- it tried to field cavalry against German tanks and it did not end well.”

The Polish Embassy, however, was not amused by the joke:

“This statements was unnecessary, inaccurate, and insensitive.

To compare the service of men and women in uniform to a department store is wholly out of place.”

The Embassy continues, claiming the myth to be Nazi and Communist propaganda:

“(Not) once in 1939 did the Polish Army deploy cavalry against German tanks. This is pure Nazi and Communist propaganda that continues to weave its way into Western media reports to this very day.”

The Polish Embassy also addressed the facts of the case:

“Additionally, the historical facts simply do not support Mr. Cramer’s comparison…. Here are the facts: in 1939 there were a number of recorded Polish cavalry charges against the invading Nazi German forces. These charges were directed against infantry, artillery, supplies, and at times as a means of breaking out of encirclement, but never against tanks.”

Just how did this myth get perpetuated?

The myth stems from a single action in which Polish Uhlans charged a group of exposed German infantry. The tactic itself was not itself flawed; on many occasions during the invasion of Poland it was successful against German infantry. However, in this engagement, the Uhlans had not counted on German armored reinforcements.
[text_ad]

In his article for Military Heritage on Poland’s cavalry doctrine in WWII, Alex Zakrzewski gives an account of the infamous battle that would bring undue ridicule to the Polish cavalry:

“In the late afternoon of September 1, 1939, the 18th Uhlan Regiment of the Pomorska Cavalry Brigade was holding its position along Poland’s heavily forested northwest frontier when orders arrived to attack the flank of the advancing German 20th Motorized Infantry Division. Wasting no time, the regimental commander, Colonel Kazimierz Mastalerz, ordered his depleted squadrons to mount and set off to fulfill his mission. At around 7 pm, scouts spotted a column of German infantry badly exposed in a forest clearing, perfect prey for a saber charge. When the regimental adjutant suggested attacking dismounted, the colonel would hear none of it.

“Young man,” Mastalerz said tersely, “I am quite aware of what it is like to carry out an impossible order.” Spurring their horses forward, the Poles burst out of the woods with sabers drawn and quickly scattered the enemy infantry. There was no time to celebrate, however, for hardly had their horses caught their breath before a troop of German armored cars arrived on the scene and opened a devastating hail of fire from their machine guns and automatic cannons. Twenty troopers, including Mastalerz, were killed before the horsemen could turn their mounts and flee behind a nearby hillock. The next day, Italian war correspondents were brought to the scene and told that the Polish cavalry had charged German tanks.”

Thus, the engagement was indeed mischaracterized by Axis propagandists, as the Polish Embassy claims.

The spirit of the myth is that, in World War II, the horse was an obsolete tool of war. In fact, nothing could be further from the truth.

Even in the late 30s, warfare was far from being a fully mechanized affair, and yet doctrines of the time emphasized mobility. Toward this end, horses were often used to transport infantry, artillery, and supplies. In fact, the German military pressed 2,750,000 horses into service over the course of the war. At the time of the invasion of Poland in 1939, the German military was in possession of 885,000 horses. Germany would also see thousands of Cossacks join their ranks, Russian Cavalrymen who harbored an animosity toward Stalin, who would serve from 1942-1945 with the Waffen-SS.

As for Poland, Zakrzewski states:

“Contrary to popular belief, the Polish cavalryman at the dawn of World War II was not the lance-wielding anachronism depicted in German propaganda, but a well-trained and highly motivated elite mobile infantryman.”

As a poor country, Poland had little alternative than to turn to cavalry as a stopgap to provide mobility in an age when mechanization dominated military tactics. Poland’s cavalry was 70,000 men strong, consuming 60% of the fledgling nation’s military budget.

During the German invasion of Poland, Polish cavalry was effective enough to embarrass famed architect of the blitzkrieg General Heinz Guderian on at least one occasion, as Zakrzewski describes:

“South of Danzig, in the so-called Polish Corridor, the action at Krojanty was just one of a series of engagements fought between the Pomorska Brigade and the German 2nd and 20th Motorized Infantry Divisions. So spirited was the cavalry’s defense that by day’s end the 2nd Motorized Infantry Division was forced to notify its corps commander, Generaloberst Heinz Guderian, that it was withdrawing. “I was speechless for a moment,” Guderian wrote in his memoirs. “When I regained the use of my voice, I asked the divisional commander if he had ever heard of Pomeranian grenadiers being broken by hostile cavalry.” The next day he made a point of visiting the division and personally directed the next attack.”

It is good to see the Polish Embassy set the record straight on the real tactics and bravery of the Polish cavalry in World War II. While it’s unlikely that this sets the myth to rest, perhaps at the very least members of the media will take the time to get the facts right before they quote lessons from history.

You can find the full statement by the Polish Embassy here: 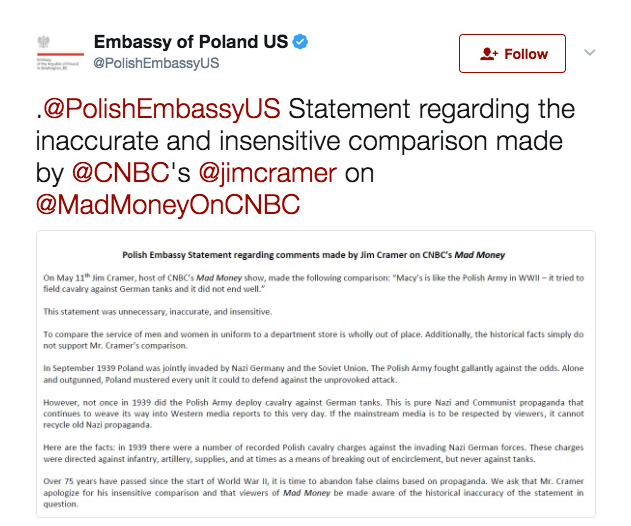