Spanish painter Francisco de Goya witnessed the horrors of war outside his own window—and captured them forever with his brush.

When French troops invaded Spain in the spring of 1808, one of the most captivated onlookers was neither a soldier nor a diplomat, but a painter—albeit, one of surpassing genius. Francisco Jose de Goya, court artist for King Charles IV, was scarcely a disinterested observer. His livelihood depended on the survival of the Spanish royal family, all but one of whom were safely in exile in France at the time. The remaining royal, 13-year-old Prince Francisco, had been summoned to France by his father, but the youth had wept so bitterly at being forced to leave the palace in Madrid that an angry crowd of onlookers attacked the prince’s armed French escort beneath Goya’s own windows in the plaza of the Puerta del Sol. In the spontaneous but savage street fight that followed, hundreds of soldiers and civilians were killed, and a popular uprising was born, pitting Spanish patriots and their English allies against the hated French occupiers. The word “guerrilla” quickly entered all three languages.

The 62-year-old Goya was not anti-French. Indeed, he was a longtime member of the afrancesados—the pro-French faction of Spain. But the sights he saw on May 2 and 3 outside his apartment seared themselves forever in his memory. The battle on May 2 had been followed by a coldly furious round of retaliatory executions by French firing squads the next day. Anyone caught carrying a weapon or even suspected of taking part in the previous day’s battle was placed against a wall and shot. There were no appeals. From these two days sprang the cataclysmic six-year-long Peninsular War. By the time it was over, French emperor Napoleon Bonaparte would have lost a quarter of a million men—100 a day, every day—to the pitiless guerrillas who seemingly fell on every isolated troop convoy or supply train. The French defeat in Spain began Napoleon’s long spiral from glory to exile.

Goya continued to function as a painter in the court of Napoleon’s brother, Prince Joseph, who had ascended shakily to the Spanish throne. But the war and its attendant horrors remained within him. As soon as the French left Spain in 1814, he went to his easel and painted, in quick succession, The Colossus, The Second of May, and The Third of May. The first depicts a mute, glowering giant rising over the armies on the Spanish plain—a symbol of Napoleon, the invading French Army, the will of the Spanish people, or war itself. The Second of May is an eyewitness view of the fight that took place between the Spanish peasants and the French soldiers outside Goya’s home. In the painting, which brilliantly has no central focus, panic-stricken men stab wildly and horses flail about blindly, trapped in a murderous melee that none can escape. In its confusion, brutality, and sheer animal terror, The Second of May is history’s first realistic, unsentimental painting of war. 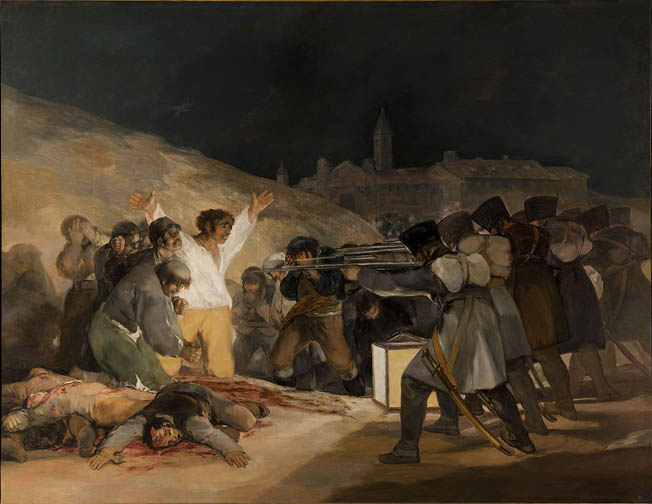 The Third of May, perhaps Goya’s greatest painting, shows a French firing squad gunning down Spanish civilians. The shooters are impersonal, almost machine-like in their uniformed anonymity. The victims, whose faces are vividly etched, display the full range of human emotions at the moment of death. Some are terrified, some are prayerful, some are stoic—all are transcendent in their humanity. The main figure, a man dressed in a white shirt, kneels before his executioners with his arms upraised in a final gesture of defiance or supplication, almost Christ-like in his suffering (he even has a pierced palm). He represents all the helpless victims of war—his fate is literally out of his hands.

With visionary genius, Goya foretells the horrific cavalcade of civilian deaths that would follow in the ensuing century and a half, culminating in the Jewish holocaust in World War II. A series of 80 drawings he made at the same time, The Disasters of War, extends that view, depicting the war as a series of small-scale atrocities—murder, rape, hanging and torture—that add up to an enormous crime against the Spanish people and, by extension, against all humanity. Not surprisingly, Goya kept these gruesome drawings secret, and they were only shown publicly in 1863, 35 years after his death. Beneath one sketch the artist had scrawled: “Yo lo vi (I saw this).” Thanks to his unflinching vision, we still do.