By 1135, there were probably five thousand medieval knights in England, but they differed little from their great-grandfathers who fought with William the Conqueror at Hastings.

Numerous pictorial representations show us the arms and armor of the 12th-century Anglo-Norman knight, the most famous being the Bayeux Tapestry. This woven testament depicts the arms and armor of both horse and foot at the Battle of Hastings. It has been dated at about 1080, and thus is contemporary with the battle. There is also a carved ivory comb from St. Albans, circa 1120, showing figures wearing spangenhelm helmets and the mail hauberk covering the heads of the warriors. The seal of King Stephen, circa 1135, shows cloth streamers wound around the king’s helmet, perhaps as an indicator of rank. Wall paintings from Essex, circa 1150, also show conical helmets and coifs worn by medieval knights.
[text_ad] 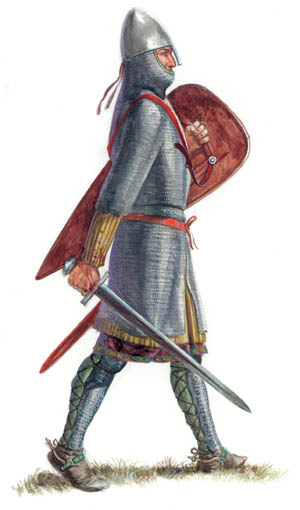 The Best of the Best

The leaders of the Anglo-Norman armies wore the best and most complete armor. The Bayeux Tapestry depicts leaders with mailed leggings and others without. The tapestry shows no other visual indicators of rank. Of course, there are the many curious devices painted on the Norman shields. This was perhaps a holdover from the their Viking ancestry; Norsemen painted their shields for a variety of reasons. No doubt, the leaders were distinguishable by their shield designs and number of bodyguards.

Knights wore a quilted tunic, called a gambeson or aketon, usually under their hauberk coat of chain mail, but occasionally the gambeson was worn over the mail. The chain mail itself was blackened, gilded, or silvered as well as painted or enameled to keep it from rusting in the wet northern European climate. The helmets often had painted colored panels, again as a rust preventative. Helmets were essentially a single-piece steel skull with a riveted rim and nose protector bar.

A “kite” shield was used to protect the left side and left leg of the mounted warrior much better than the traditional round shield. A kite shield was constructed of wood, two existing examples being of lime and cedar, with a leather or parchment type of covering painted with the previously mentioned devices. Medieval knights wore the shield with a strap around the shoulder and two or more additional straps for the wrist and forearm.

Weaponry consisted of a 7- to 9-foot lance made of pine or ash, a sword, mace and dagger. Lances were often painted to protect the wood. The sword was a heavy, thrusting weapon, very deadly when used on horseback against enemy foot soldiers. There is also some indication that Anglo-Norman knights may have used axes with shafts from 3 to 4 feet long.

Anglo-Norman foot soldiers were mostly unarmored levy militia and archers. The Normans adopted the Saxon fyrd system, with local shire and town militias commanded by either local officials or priests. The Anglo-Saxons fought in their societal groupings as they had for centuries, with the shire levies fighting alongside their friends and neighbors. A Wessex psalter, circa 1050, shows Saxon foot to be unarmored with a round shield, helmet, and spear or javelin.

Another manuscript from the early 11th century shows the unarmored foot with no helmet, a round shield, and a long-handled axe. A carved stone font in Devon, circa 1120-1140, shows unarmored archers, with their arrows carried in their belts. From the Bayeux Tapestry, tunic colors for the foot varied from rusts, tans, and browns to greens, blues, and linen. 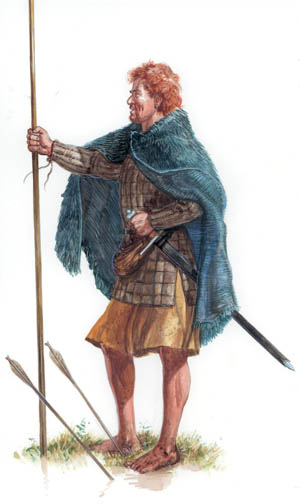 The Scottish army under King David would have looked very different from the Anglo-Normans, except for the knights. The Scottish foot soldier at best had access to a cloak and tunic, but were bare-legged and barefoot. Their weaponry was varied, but the sturdy lowland spearmen carried a 12- to 16-foot-long spear and a small shield. The Galwegians and other foot carried axes, spears, and whatever other weapons they could bring.

The Scottish armor worn by the knights mirrored that of the Anglo-Normans. This is not surprising, considering that the Scottish king had brought many Anglo-Norman knights north with him when he ascended the throne. They remained in the north, being granted lands and power. Over 200 of them accompanied King David when he invaded northern England in support of Matilda. The chroniclers tell us only 19 of them were left unwounded at the end of the Battle of the Standard.