In the wake of the events on August of 1964 near the Gulf of Tonkin, the USS Maddox quickly became a symbol of North Vietnamese aggression.

The United States Navy commissioned the USS Maddox toward the end of World War II as a fast carrier escort for action in the Philippines and South China Sea. An Allen M. Sumner-class destroyer, the Maddox supported carrier raids against Japan and American operations on Okinawa after recovering from a Kamikaze attack earlier in 1945. She would also participate in UN operations during the Korean War, but would gain infamy prior to the Vietnam War in the Gulf of Tonkin.
[text_ad]

Shipping out from Taiwan in July 1964

In July of 1964, Maddox shipped out from Taiwan to collect SIGINT as part of her Desoto patrol along the coast of North Vietnam from the Demilitarized Zone up to China. OPLAN 34A raids were being conducted in the area and North Vietnamese naval forces were actively responding to South Vietnamese incursions. 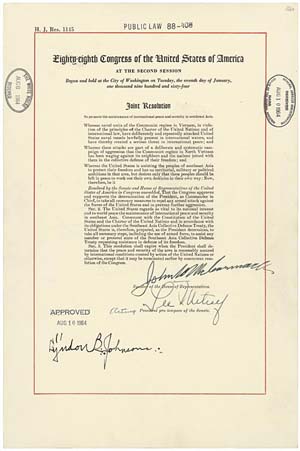 The Maddox continued her Desoto patrol, now escorted by fellow destroyer USS Turner Joy, with OPLAN 34A raids continuing in the region. The Maddox was on high alert due to the previous attack and new U.S. intelligence revealing that the North Vietnamese government was planning offensive maritime operations in the Gulf of Tonkin. On the morning of August 4, inclement weather and 6-foot waves prevented the Maddox and Turner Joy from relying on their radar systems to gauge enemy positions. A combination of these variables would lead to what had been seen as the phantom attack, which evoked the notorious Gulf of Tonkin resolution.

At 2040 on August 4, Maddox reported she was tracking inbound unidentified vessels. Over the next three hours, the two destroyers would make evasive maneuvers at high speeds while expelling over 200 5-inch shells and 100 3-inch shells at the phantom attackers. F-8 Crusaders would later report that there were no other vessels in the vicinity and the destroyers had most likely been picking up the wave tips on their sonar, already deemed unreliable due to the weather. Captain Herrick later submitted a report to this effect, casting further doubt on the events that had transpired on that day.

Regardless, President Johnson and Defense secretary McNamara would use these attacks to justify retribution and American intervention on behalf of the South Vietnamese. On August 5th, the USS Ticonderoga would launch a retaliatory attack on a North Vietnamese oil storage facility, marking America’s assumption of a direct role in the Vietnamese conflict.

In the immediate wake of the events that transpired in August of 1963, the USS Maddox quickly became a symbol of North Vietnamese aggression. But as classified documents came to light and time allowed perspective to be shed on these events, the Maddox episode suggested intelligence manipulation and historic counter narratives of the Vietnam War. However, regardless of new interpretations, the USS Maddox remains a naval hallmark in American history and the Cold War.