Edward Pakenham at the Battle of New Orleans

Did the same heroism that led to victory in the Peninsular War lead to Edward Pakenham’s defeat at the Battle of New Orleans?

“Victory has a thousand fathers,” the late President John F. Kennedy once said, “but defeat is an orphan.” So it was for the third man in line for Great Britain’s most important command in the American Second War for Independence. The Duke of Wellington had turned it down and lived to defeat Napoleon at Waterloo, but one is led to wonder if he, too, would’ve been beaten by Old Hickory. The next. Maj. Gen. Robert Ross of Bladensburg, agreed to come south to New Orleans, but only after the sacking of Baltimore (and perhaps also of Annapolis, Philadelphia and New York.)
[text_ad]

Alas, he was cut down by American snipers just before the Battle of North Point on Sept. 12, 1814, and so the plum appointment dropped into the lap of the Irish-born Maj. Gen. Edward “Ned” Pakenham, brother-in-law to the Iron Duke and a commander whom Theodore Roosevelt in 1882 called “One of the bravest and ablest of all Wellington’s brave and able lieutenants.”

Others, however, have not been so sure down the years. Jackson biographer Robert V. Remini calls Pakenham “impatient, if not reckless… Impetuosity in the Peninsular War had brought victory. Here outside New Orleans it would bring devastating defeat.”

Asserts TR, “Pakenham left nothing undone to accomplish his aim, and made no movements that his experience in European war did not justify his making. There is not the slightest reason for supposing that any other British general would have accomplished more or have fared better than he did.”

A “Blockhead” or “One of the Bravest”? 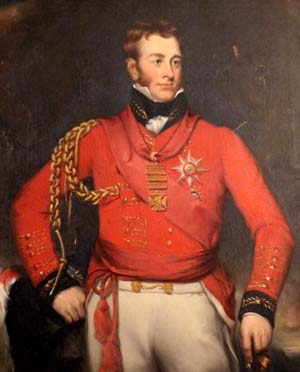 Reportedly, Pakenham was not one of the British Army’s greatest commanders in the field, and allegedly the Iron Duke thought Ned a bit of a lightweight. His successful rival, Andrew Jackson, scorned him in utter contempt for protesting the American forces’ sniping at his sentries at night while the British Army was in the process of invading the United States, American military author Col. John R. Elating goes a step further than the Iron Duke’s evaluation to call him a “blockhead.”

Of course, had he won the Battle of New Orleans and not lost it, he would have been named the Royal Governor of Louisiana by deposing Claiborne. Thence he would have over an English-Spanish fiefdom—and Andrew Jackson would never have become President of the United States. Such are the vagaries of history.

Up until his death under enemy fire at New Orleans, Pakenham had had a truly stellar military career, fighting throughout all of the French Revolutionary campaigns and the entirety of the Napoleonic Wars except being at the Duke’s side at Quarte Bras and Waterloo. He had risen rapidly from lieutenant in 1794 to the permanent posting of Major General by 1812.

Called “tall, handsome and precise in dress and manners,” Pakenham was wounded in combat several times, and in the same spot in the neck on two different occasions. He soldiered in his native Ireland during the Irish Rebellion, as well as in the Danish-Swedish West Indian Islands. In the Peninsular Campaigns of 1809-14, he served with bravery and distinction at the Battles of Bussaco, Fuentes de Onoro, Salamanca and the Pyrenees.

Knighted Before Death and a Formal Recognition of Valor

He was awarded the Knighthood of the Bath by the Prince Regent in 1813. This was upgraded to Knight of the Grand Cross of the Order of the Bath just before he was killed in faraway America.

Like Wellington, Pakenham was opposed to the war in the United States. Still, duty was duty. Faced with a tide of British soldiers retreating from Jackson’s barricade, he rose high in the saddle to cry, “Shame! Shame! Remember, you’re British! Forward, gentlemen, forward!” Then the American fire cut him down.

Pakenham’s body was placed in a barrel of rum for shipment home, but it was deposited on the wrong vessel, a fact not discovered until the tars started complaining about their drink. The general is today honored, however, in the South Transept of St. Paul’s Cathedral in London.