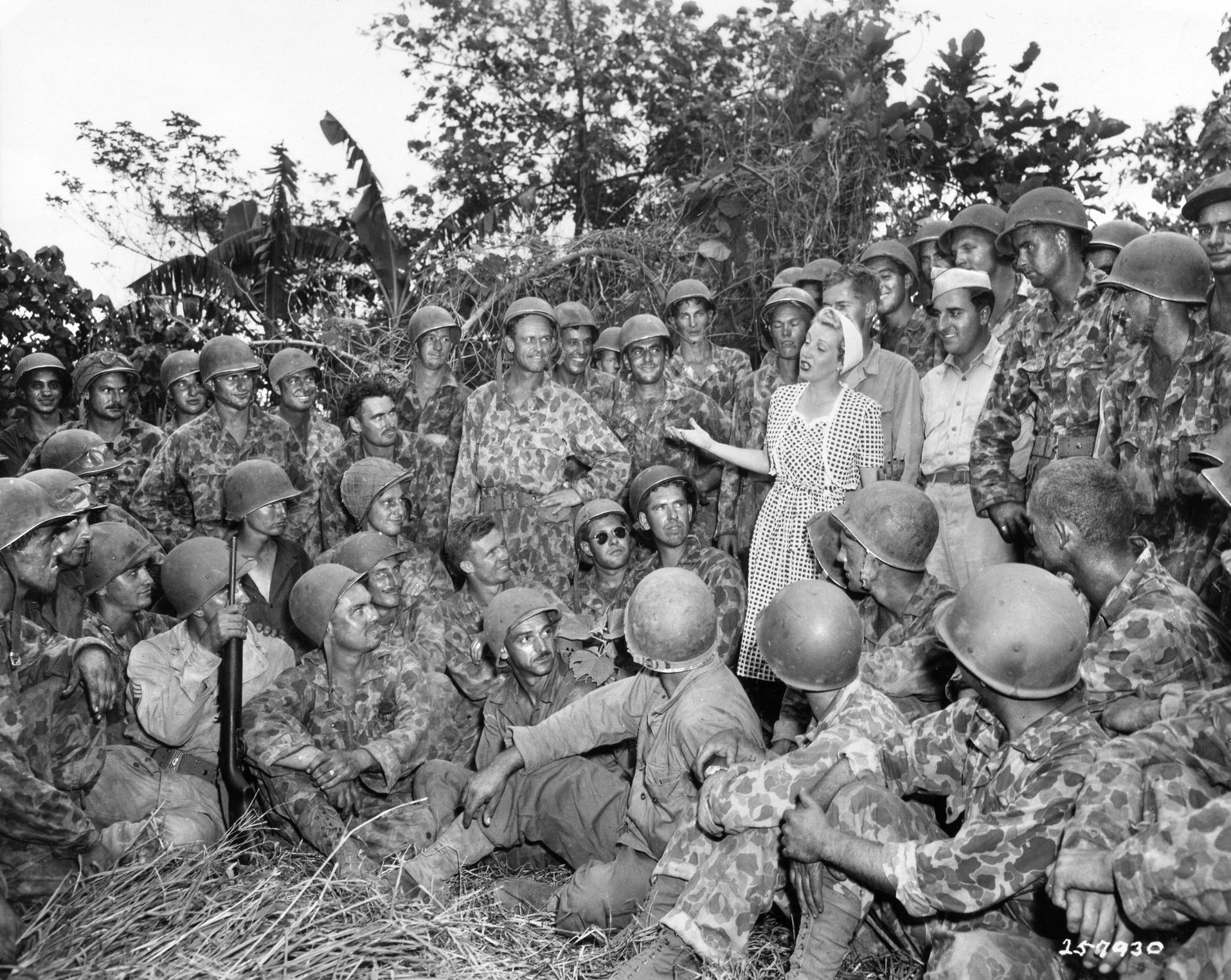 The USO Turns 75: American soldiers’ “Home Away From Home”

During WWII, the unique civilian organization did much to boost the morale of soldiers at home and abroad.

This article appears in: Spring 2017

Almost every American veteran has fond memories of a Track-Side Free Canteen, or a USO center at some train station or airport situated at locations around the world, or a “USO Camp Show” that provided entertainment close to the front lines, during every conflict since World War II.

The letters “USO” (United Service Organizations) often meant a pretty young lady who served a cup of hot coffee, and maybe a doughnut with a smile or a well-known Hollywood actor or musical performer who provided the soldiers with an hour of joy and relief from months of fighting on some far-flung battlefront.

The USO had its earliest roots during the days of the American Civil War, where some 7,000 Ladies Aid Societies provided help as needed to soldiers of both sides.

Another predecessor of the USO, the YMCA, which began in 1856, placed books on ships for sailors to read. During World War I, some 28 organizations, including the YWCA, Young Men’s Hebrew Association, the Jewish-Welfare Board, the American Library Association, the Knights of Columbus, the National Catholic War Council, and the Salvation Army all attempted to help our soldiers during the trench fighting in France. More than 125 volunteers were wounded or gassed, three dying later from their injuries, while eight volunteers (including two women) were killed in action while providing services to American soldiers.

World War I demonstrated that a single organization could function better than multiple smaller groups. Even before the outbreak of World War II, the U.S. military realized the mammoth task that was about to unfold. During the early months of 1938, these various organizations came together to coordinate their funds, manpower, and resources.

The Creation of the USO

The USO was officially created on February 4, 1941, with one of the first centers opening on May 28 at the Charleston Navy Yard. During the war, almost every town in the United States set up a USO center—there were more than 3,000 in all, staffed by 1.5 million volunteers. They provided soldiers a place to eat, write a letter back home, play games, or simply relax.

Approximately 300 prefabricated wooden clubhouses were erected by the U.S. government, with the first being completed by November 28, 1941. These centers were badly needed where local communities lacked public facilities to accommodate soldiers, sailors, and airmen stationed nearby.

There were 125 Track-Side Free Canteens that provided a free meal to millions of soldiers crossing the country by train. In three years, the canteen in Danville, Illinois, (population 37,000) alone had served some 489,664 sandwiches. This generosity was all the more remarkable, considering that most food items were rationed and in short supply to civilians during the war.

Because the military was then racially segregated, local state laws forced the establishment of 116 USO centers that were specially run for black soldiers. It is believed that no soldier of any color was ever turned away from a USO center during World War II. It appears that the majority of soldiers realized the situation and normally visited the “appropriate” centers, although this was far more difficult in the southern states.

The USO in New York and Hollywood established “canteens” where servicemen and women could drop in for live entertainment, coffee, soft drinks, and a simple meal. Other canteens were opened in major cities such as Boston, Philadelphia, Cleveland, San Francisco, and even London. It was not usual to see some of the biggest names in entertainment mixing with the troops, serving them snacks, and even cleaning up after the night was over. Two movies, Stage Door Canteen and Hollywood Canteen, were produced in 1943 and 1944, respectively, that highlighted the importance of these clubs.

Between 1942 and 1947, the YMCA ran many USO Clubs that were visited by 460 million soldiers. The USO underscores the concept of “patriotism,” a word that most Americans understand, believe in, and support—especially when American servicemen and women are fighting a war. The act of volunteering is an example of the individual sacrificing for the greater good or the war effort.

The USO Camp Shows featured some of the biggest names in Hollywood entertainment. They conducted some 428,521 performances in 208,000 separate locations around the world. Almost every star volunteered, including Bing Crosby, Judy Garland, Orson Welles, Red Skelton, Martha Raye, the Andrews Sisters, and Tommy Dorsey. Many performed without pay, and they were all heroes in their own way.

Bill Johnson, for example, a well-known jazz musician of the day, had been turned down by the draft because of a medical condition, so he offered his services to the USO Camp Shows. Over the following years he did numerous tours, maintaining a rugged schedule, enduring the same hardships, little sleep, and irregular meals as the soldiers; but he performed his heart out at every concert.

These performers were never told ahead of time where they were going; their movements were kept secret even from the soldiers to provide some security. Entertaining the troops was not without its hazards. During World War II, 37 USO Camp Show members, mainly entertainers, were killed in the line of duty. The loss of a big-name entertainer (such as band leader Major Glenn Miller, who went missing during a flight in December 1944) was just as damaging to morale as a battle lost.

The USO Camp Shows went to great lengths to serve; one tour group of four female entertainers—Jo Andrews, Nancy Healy, Margie Liszt, and Julie Lane—traveled by dog sled to a remote post in Alaska and gave a special performance especially for the four lonely GIs stationed there. The four entertainers then went on to provide these men with a home-cooked meal. This troupe went on to do 830 shows.

Many of these Camp Shows were broadcast over the Armed Forces Network. AFN disk jockey (and movie star) Mickey Rooney often entertained the soldiers as an impromptu addition to a USO Camp Show.

Bob Hope exemplified such commitment to our soldiers, having performed during almost every Christmas season between 1944 and 1991, and becoming one of the most well-respected stars of America.

The current issue of the USO’s magazine On Patrol, notes that “Hope and his band of entertainers and crew … had an incredibly close call during a tour stop in Palermo [Sicily], where German bombers destroyed the docks and buildings in the area around their hotel…. The close call didn’t deter him. Hope took a USO circuit out to the Pacific Theater the following year.”

And who does not remember the legendary German-born singer and actress Marlene Dietrich, who did several tours in 1944 and 1945. At one location, Ms. Dietrich met General George S. Patton, Jr., and said, “I’m not afraid of dying, General, but I am afraid of being taken prisoner…. If they catch me … they’ll shave off my hair, stone me, and have horses drag me through the streets.”

Patton smiled and pulled out a revolver. “Here, shoot rather than surrender! It’s small but it’s effective.” Ms. Dietrich would carry that weapon with her for the rest of the war. Years later, while performing in Las Vegas, Ms. Dietrich made a point of inviting veterans to her dressing room after her shows to talk about their experiences in World War II.

Entertainment in the Hospitals

The soldiers appreciated any entertainer, especially when they came to the hospitals. One such entertainer, June Andrews, recalled seeing a paralyzed soldier named Richard, who had not spoken in months. From the fatigue of her tour, she just broke down and began crying. Richard simply said, “Didn’t they tell you not to do that?” Afterward, the two had a long talk and remained in contact for years to come.

In 1944 alone, some 5,400 performances were given for some 850,000 patients at 79 different hospitals. The following year, this figure had increased to 3.3 million patients at 192 hospitals.

After the war ended, the USO went out of business—temporarily. On New Year’s Day 1949, following a directive by President Harry S. Truman, the USO was re-established and continues its work to this day.

The USO Continues its Mission

Even today, the story of the USO is one of volunteers who give freely of their time to serve our nation’s servicemen and women—to entertain them and give them a “home away from home,” and to help in any way they can. It is also the story of numerous foreign nationals who provide that same smile, out of gratitude, at USO Centers overseas. It is the story of corporate America, donating the funds and locations, so that the USO can provide this support wherever needed.

The USO has repeated its support of American soldiers in every war since World War II, including Korea, Vietnam, Desert Storm, and more recently during the War on Terror. The names of the locations, the volunteers, or the actors and singers may have changed, but the attitude is the same: a genuine desire to help those fighting to protect America’s freedoms and way of life.

The countless volunteers—be they famous individuals or simple folks wanting to make a difference—each provide a feeling of a caring population. Several current volunteers, stand out: Myrtle Feeney, Sybille Eckhardt, Celesete Warner-Heymann, and Helmut Esser, each withmore than 10,000 hours of service. Baking homemade cookies and cakes for wounded soldiers in military hospitals or providing Kool-Aid powder so that the foul-tasting water in the desert is easier to drink, the USO provides.

Editor’s Note: The 75th anniversary of the USO, in February 2016, would seem an appropriate time to reflect upon this unique organization and its accomplishments. The author is presently working on a book and a TV documentary covering that story: The USO—75 Years Helping Our Soldiers.

As an “overseas brat” whose father served the United States for 33 years and attained the rank of chief master sergeant, Dr. Provan, too, has many fond memories of the USO, which has led him to become involved in this project, despite the fact that he presently lives Germany. To date, no film documentary has ever been produced about the USO, although it is a topic that brings back fond memories to so many generations.

For this reason, he is asking American veterans of any war to come forth and tell their memories and experiences about the USO. Perhaps a veteran still has a photo of some USO Center or Camp Show that they attended. And, naturally, if anyone took 8mm home movies, they might make a great addition to the documentary; these can easily be transferred to a DVD.

From soldiers who once entered Germany or fought on a Pacific island to those serving overseas today, Dr. Provan seeks support in thanking the USO and the countless volunteers for all they have done in the past—and will do in the future. Please feel free to contact him via e-mail at: johnprovan@gmx.net.