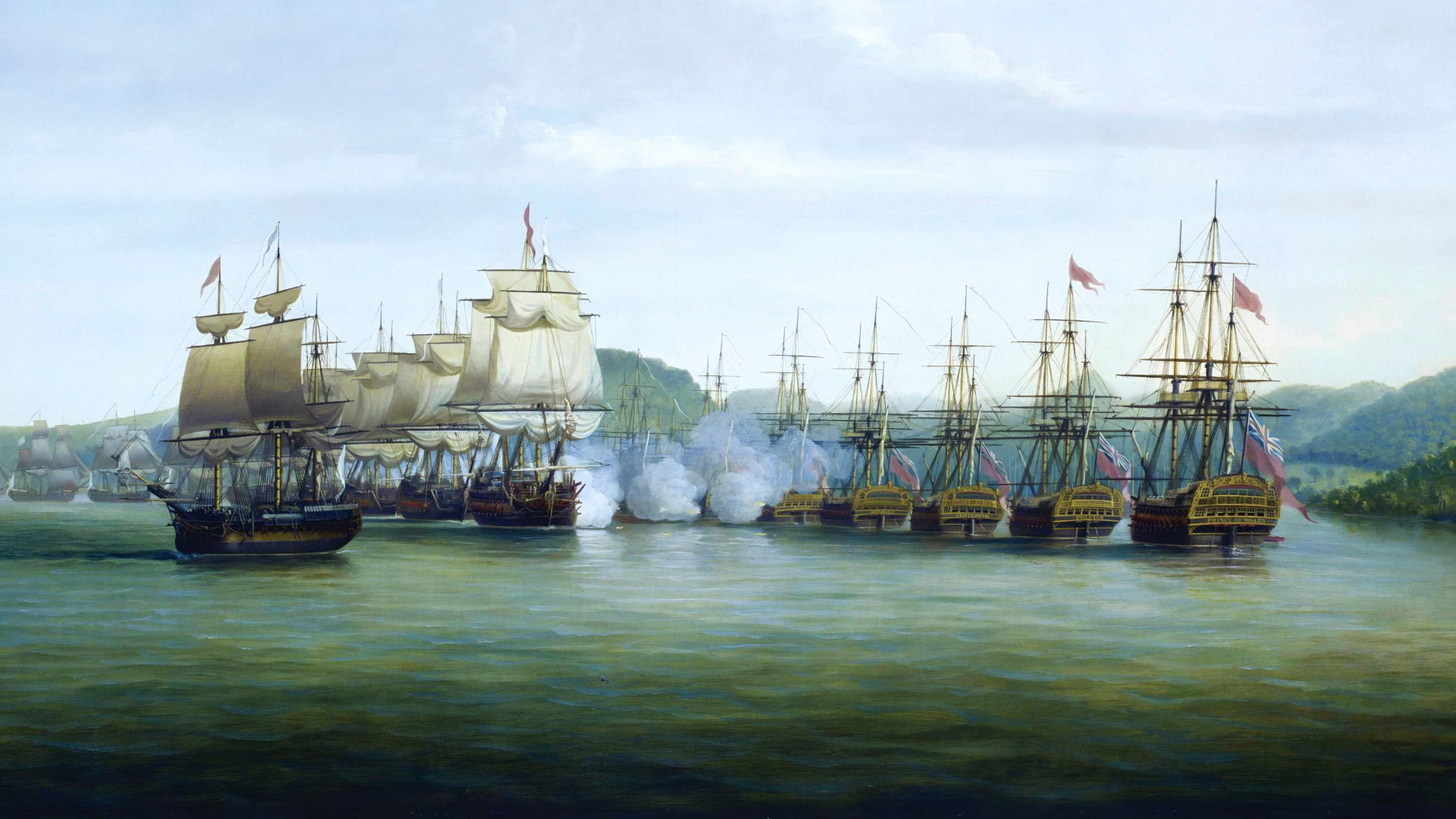 In one of those ironic twists of history, French Vice Admiral Count Charles Henri Hector d’Estaing, who led the first French fleet to North America in 1778 to assist the Americans during their revolt against the British crown, never met George Washington. Despite the trials and tribulations of d’Estaing’s 15-month expedition to North America, the men maintained a high regard for each other.

When Major General John Hancock presented d’Estaing with a full-length portrait of Washington while the French fleet was undergoing repairs in Boston in autumn 1778, the French admiral hung it in the cabin of his 80-gun flagship Languedoc. “I never saw a man so glad of possessing his sweetheart’s picture, as the admiral was to receive yours,” the Marquis de Lafayette teased Washington afterwards.

D’Estaing was born in 1729 into an aristocratic family from the Auvergne region of south-central France. His ancestors had served in the French military going back to the 13th century. His father, a lieutenant general in the French army, made sure that his son followed in his footsteps.

As a young officer in the French army, d’Estaing rose rapidly from lieutenant to brigadier general with service in both the War of the Austrian Succession and the Seven Years War where he served in India. Captured in the siege of Madras in 1759, the British paroled him. Seeking to circumvent his parole, he joined the French East Indies Company and plundered British ships and outposts.

On his return to France, though, he accidentally fell into the hands of the British who incarcerated him on a prison hulk in Portsmouth Harbor under deplorable conditions. During his imprisonment, he developed a life-long hatred of the British. Although the French army promoted him to lieutenant general upon his release, he found service on the high seas more exciting, and therefore transferred to the French Royal Navy. He first served as governor of the French colonies in the Lesser Antilles from 1764 to 1772 and after that governor and inspector of naval forces in Brest.

Following the Continental army’s victory over the British at Saratoga in October 1777, France entered into a defensive alliance with the Americans in February 1778. At the outset of the alliance, American commissioners to France Benjamin Franklin, Silas Deane, and Arthur Lee pressed Charles Gravier, Count de Vergennes, who was King Louis XVI’s foreign minister, not just to continue supplying arms and equipment, but also for naval assistance to threaten Vice Admiral Richard Howe’s fleet supporting British expeditionary forces in the newly established United States.

In response to this urgent request, Louis XVI told naval secretary Antoine de Sartine to create a a third admiralty for France and appoint d’Estaing to the position. Thus, d’Estaing became the vice admiral of naval operations in Asia and America. In an effort to keep the British from tracking the progress of French preparations to send a fleet to assist General George Washington’s Continental army, it was decided to outfit the fleet at Toulon rather than Brest to maintain as much secrecy as possible. For his expedition, d’Estaing would have 12 ships of the line, five frigates, and 4,000 soldiers. His flagship was the 80-gun Languedoc. Before he departed, Louis XVI instructed him to keep his fleet intact while both threatening Howe’s fleet and protecting French possessions in the West Indies.

The French did not act with any sense of urgency, at least as far as the American ministers could tell. It took them three months to outfit the fleet, and when d’Estaing at last set sail April 13, 1778, it was nearly another three months before he arrived at the mouth of the Delaware River. His reason for the long passage, which was more than twice the length of a slow passage of that period, was that he wanted to avoid an engagement with the British en route that might have forced him to turn back.

Fearing an invasion of England by France and Spain, the British delayed their plan to send naval reinforcements to give Howe superiority over d’Estaing. But Rear Adm. John Byron finally set sail on June 9 for North America with 13 ships of the line to reinforce him.

The French fleet arrived in Delaware Bay in early July, and then moved into position off Sandy Hook, New Jersey, to threaten Howe’s fleet in New York Harbor. Howe had built his fleet around his 64-gun ships of the line that at high tide could pass over a treacherous sandbar at the entrance to the harbor. D’Estaing’s heavier ships of the line, however, could not clear the sandbar.

After 10 days of trying to find a way to engage the British, d’Estaing weighed anchor on July 22 and sailed to Newport, Rhode Island, in order to conduct a joint operation with American Maj. Gen. John Sullivan against a strong British garrison led by Maj. Gen. Robert Pigot.

Washington and d’Estaing had conferred frequently through correspondence and agreed on the pressing need to liberate Newport to regain control of what many naval officers of the time regarded as one of the best harbors in North America. The French admiral needed to move quickly to retain the initative, but it took him six days to get his fleet into position.

Pigot had 6,500 troops to defend Aquidneck Island in Narragansett Bay where the port of Newport was situated. Sullivan was also slow in his preparations, allowing Howe’s British fleet to catch up to d’Estaing on August 9. Outnumbered in ships of the line, d’Estaing weighed anchor to engage Howe at sea, informing Sullivan that he would return afterward to resume the attack on Pigot’s occupying force.

The two fleets moved out to sea, each seeking to gain the advantage of the weather gauge over their opponent. As they maneuvered against each other on August 10, a hurricane struck just as they were about to engage. D’Estaing ordered his ships to sail south in an effort to avoid being smashed against the coastline. Reassembling after the storm, several small skirmishes occurred in which the French ships suffered additional damage, including the Languedoc, dismasted by the 50-gun HMS Renown on August 13.

D’Estaing returned briefly to Newport to inform Sullivan that he could not support him and then sailed to Boston for repairs that lasted two months. The British counterattacked Sullivan’s army on August 29, and nearly destroyed it.

D’Estaing decided while in Boston that it was in France’s best interests for him to sail to the Caribbean in an effort to fulfill his obligation to protect the vital French colonies of St. Lucia and Martinique. The French and British were headed for a major showdown in the economically important Caribbean.

The two rival European powers had been steadily building up their forces in the region where they both had lucrative sugar plantations. The entry of France into the conflict meant that Britain had to scramble to protect its colonies in the Caribbean because the West Indies colonies produced far more revenue for the empire than the American Colonies.

D’Estaing set sail for the West Indies on November 4, 1778. That same day Maj. Gen. Henry Clinton dispatched Commodore William Hotham with a naval squadron to transport 5,000 troops to the Caribbean theater. While d’Estaing was slowly making his way south, Hotham on December 10 reinforced the British fleet in the Leeward Islands commanded by Rear Adm. Samuel Barrington. The British then invaded the French colony of St. Lucia with 3,400 troops on December 13 and besieged its main port on December 14.

D’Estaing arrived the following day and put 7,000 troops ashore. Holding the high ground, the British repulsed repeated attacks by the French. Barrington formed his ships into a line protecting the troop transports in Grand Cul de Sac Bay. D’Estaing attacked Barrington’s fleet on December 15, but could not defeat it. The French admiral reboarded his infantry and withdrew to the French base at Martinique.

Barrington returned to England in January 1779. Byron, who succeeded Howe on October 1, 1777, as the commander-in-chief of the North American Station, soon arrived in St. Lucia to protect the British possessions in the Leeward Islands. The two fleets were separated by just 40 miles, and for the better part of six months the two commanders avoided a clash.

When Byron departed St. Lucia in May to escort a merchant convoy out of the Caribbean, d’Estaing took the opportunity to capture the British colony of St. Vincent on June 18. As if by divine intervention, D’Estaing’s situation improved dramatically when a French squadron led by Toussaint-Guillaume Picquet de la Motte arrived in Martinique on June 27 with five additional ships of the line. With the addition of La Motte-Piquet ships, d’Estaing had 26 ships of the line giving him clear superiority over Byron.

Next, D’Estaing captured the British colony of Grenada on July 4 in a bloody two-day battle in which French soldiers stormed the British fortifications on Hospital Hill overlooking St. George’s Harbor. Sartine had instructed d’Estaing to destroy British outposts in the Caribbean, but not to occupy them. D’Estaing, however, ignored those orders and garrisoned St. Vincent and Grenada.

Byron arrived off Grenada and engaged d’Estaing not knowing that he had been heavily reinforced. The battle that unfolded on July 6 consisted of a series of powerful broadsides delivered by the larger French fleet that compelled Byron to break off the action after four of his largest warships had been demasted.

D’Estaing’s victories in summer 1779 in the Lesser Antilles resulted in the British admiralty issuing orders that all of the troops Clinton had transferred to the Caribbean the previous autumn to remain in the region. Although Clinton had counted on getting back at least half of the troops he had sent, not a single one returned to the North American mainland.

During d’Estaing’s lengthy stay in the Leeward Islands, the British had captured Savannah, Georgia, in December 1778. Before returning to France, d’Estaing decided to make one more attempt to assist the Americans in an attack. The French admiral set sail in August 1779 for Savannah. The following month, in cooperation with American Maj. Gen. Benjamin Lincoln, d’Estaing besieged Maj. Gen. Augustine Prevost’s 3,200 British troops garrisoning the city.

While Lincoln’s Patriots sought to prevent the British from reinforcing Savannah by land, d’Estaing put ashore his French infantry. He launched a major assault on a key British position on October 9, but it was repulsed with heavy losses. Having failed the Americans a second time, d’Estaing departed Savannah for France on October 17.

D’Estaing, who had been wounded twice at Savannah, returned to France on crutches. He was widely criticized by the ministers of the French court, as well as the Americans, who felt he had not done enough to assist the Americans during his lengthy expedition. But to his surprise Louis XVI praised him for, in the king’s words, adding laurels to his crown by capturing St. Vincent and Grenada.

D’Estaing staunchly defended Marie Antoinette at her trial in 1793 during the Reign of Terror phase of the French Revolution. Although he supported the reforms of the revolutionaries, the Committee of Public Safety regarded him as a reactionary. For that reason, he was sent to the guillotine on April 28, 1794.

Although there was never a question of d’Estaing’s bravery in battle, he had been slow to engage the British at New York and Newport. Moreover, at Newport he seemed to doubt the military competence of the Americans to conduct a successful siege, and therefore abandoned them to their own fate.

Regarding his performance in the Leeward Islands, d’Estaing allowed four demasted British ships to escape after the Battle of Grenada when he should have taken them as prizes. Nevertheless, his capture of St. Vincent and Grenada reversed French fortunes in the Caribbean theater, tying down British warships and regulars that otherwise would have been committed to the fight against the Washington’s Continental Army.