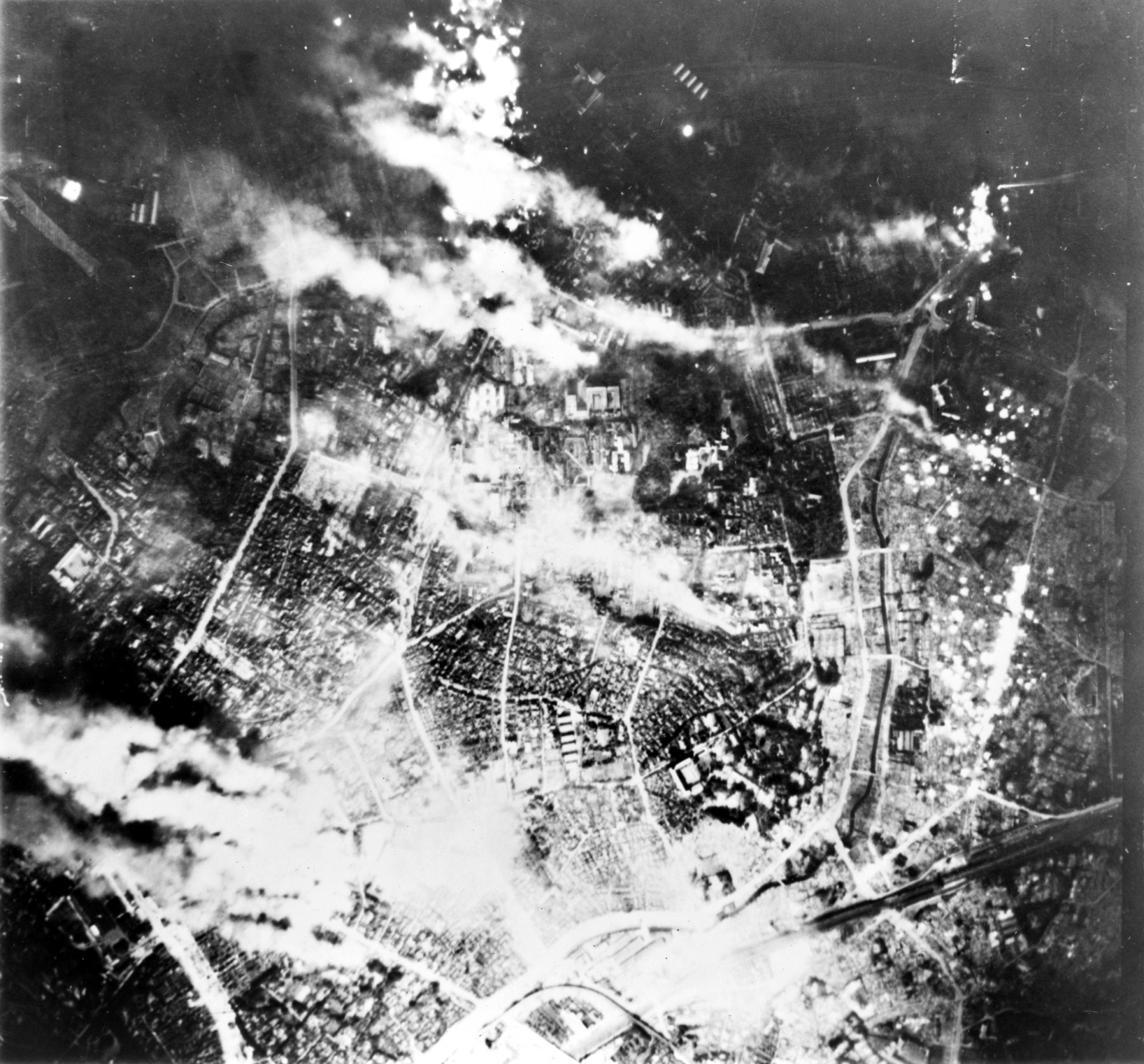 The aerial photos of the aftermath were stunning. Miles and miles of destroyed homes, apartments, businesses. Fires burning out of control. Trains and vehicles overturned. Infrastructure gone––no electricity, fresh water, or food. The economic system in ruins. Emergency services taxed to the max. Hospitals and shelters jammed. Inconsolable men, women, and children who lost everything. Casualties too high to count.

The aftermath of Superstorm Sandy? No. I was thinking of the devastation of Germany and Japan during the 1940s. Whereas “Frankenstorm”––the Halloween combination of hurricane and blizzard

that ravaged the U.S. Eastern Seaboard at the end of October 2012––was a natural disaster, the Allied bomber offensive against the Axis powers was a man-made disaster.

While viewing news reports of Sandy’s destructive power, I couldn’t help but be reminded of the Allies’ unrelenting campaign to bomb industrial and civilian targets into oblivion—presumably to punish the aggressors for starting World War II and to break the enemies’ will to resist.

When one looks at those old images, it is hard to imagine that either Japan or Germany could rebuild. But not only did they rebuild, they became, with the help of America, economic superpowers in the postwar years. Because that’s what people do.

But Japan and Germany weren’t the only ones. Stalingrad came back from the dead. Bombed-out sections of London and other British cities were restored. The flattened urban landscape of Japan rebounded into modern metropolises. And the desolate cities of Germany were converted from a smoldering wasteland into places that, more than a half century after the war, look like war never visited them. Because that’s what people do.

A trip to Warsaw a few years ago shocked me; I had read that the Old City, including the royal palace, had been totally razed during the war by the Nazis. Yet here it was, in all its pristine medieval glory. No scars, no left-behind damage, no indication that war had ever passed this way. Every brick and fresco and windowpane looking untouched.It wasn’t until I visited a museum that I discovered that the Old City was painstakingly restored stone by stone, board by board, to its original state. It is today a Unesco World Heritage Site, and astonishing in its rebirth.

I bring this up because, as I write this column, the tragic aftermath of Superstorm Sandy is still unfolding. Living in Colorado as I do, I was 1,600 miles from the disaster. But the pictures on television were heartbreaking, and I found myself asking “Can those poor people ever rebuild? Will their lives ever be the same?”

Then I thought about the devastation of Europe and Japan and
elsewhere at war’s end, and the resilience of the human race, and I realized that, yes, they can (and will) rebuild, and their lives, although they will never be the same, will be strengthened by the ordeal. They will recover and resume their lives. Because that’s what people do.

Although we don’t have a regular “Letters to the Editor” feature, I wanted to showcase a letter the magazine recently received.

Bob Dorr, author of the Fall 2012 article about the downing of Admiral Yamamoto’s plane, corrects a couple of captions. He says, “On page 8 it says that Rex Barber ‘later was given sole credit for the kill.’ That’s not accurate. Although many people believe Barber deserves full credit, the U.S. Air Force assigns one-half of a credit each to Barber and Thomas Lanphier.

“And, referring to the beautiful painting by Jack Fellows that appears on the cover and on page 27, the caption identifies the aircraft as a Douglas SBD Dauntless. That’s not accurate. The painting depicts a Curtiss SB2C Helldiver (the aircraft also shown in a photo on page 38).”

(Editor’s note: Thanks for the corrections, Bob. The errors were ours, not the author’s of those stories, or Jack Fellows.)