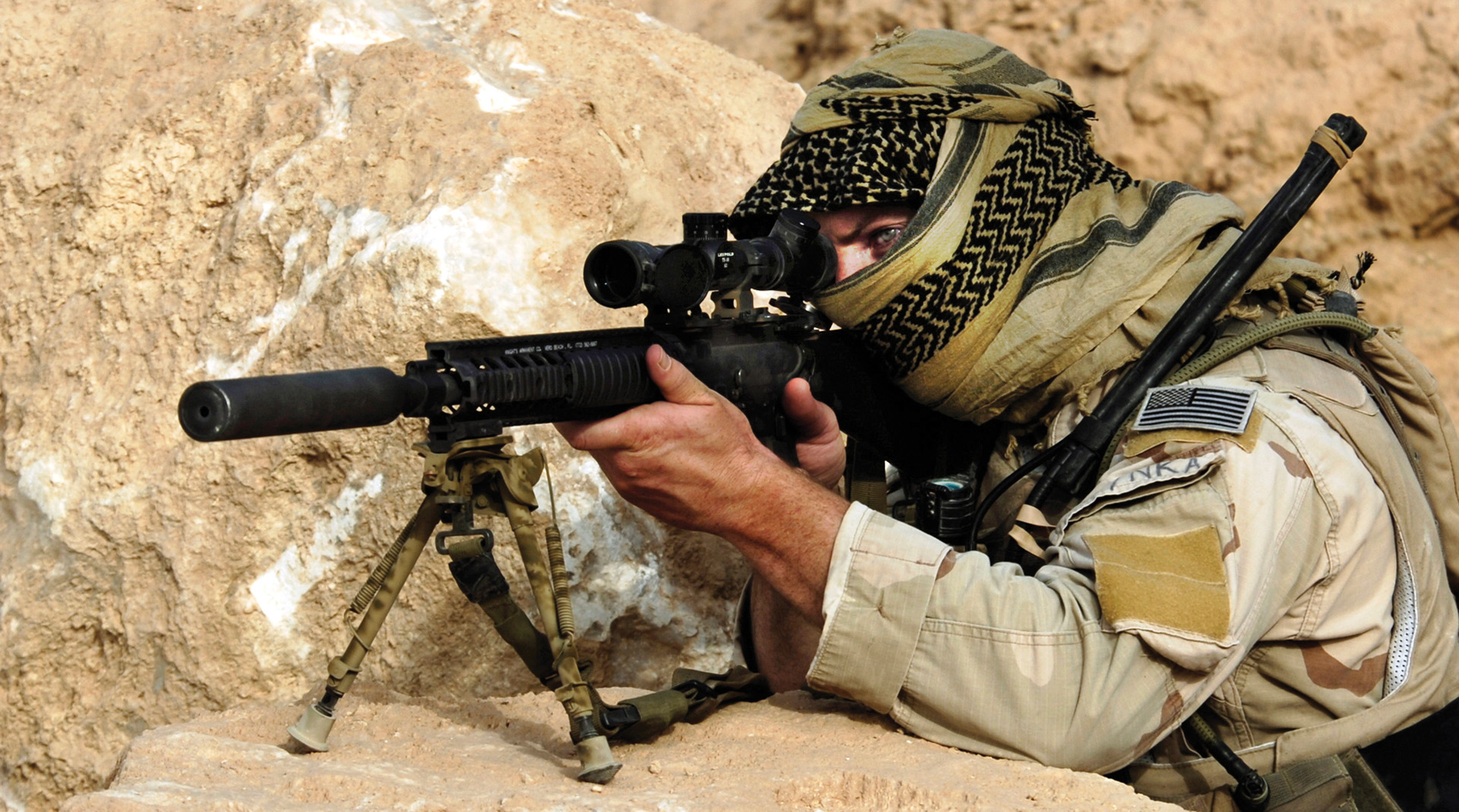 Navy SEAL sniper Christopher S. Kyle relied on a variety of precision rifles to protect Marines during his four tours of duty in Iraq.

From the sniper’s perch, the city of Fallujah, Iraq, on November 7, 2004, looked dusty and brown. Most of the buildings were squat, two-story affairs, with the occasional minaret or domed mosque sitting above them. Navy SEAL (Sea-Air-Land) team member Christopher S. Kyle looked through the optic on his bolt-action .300 Winchester Magnum rifle at the cityscape before him. A railroad track and a berm lay between him and the city center; the enemy moved beyond the berm. Insurgent fighters crept closer to the U.S. Marines entering the city; the enemy guerillas were 800 meters away. They probably thought they were safe from detection.

Kyle placed an insurgent in the crosshairs of his rifle and squeezed the trigger, killing the man before he could engage the marines. As the insurgent fell dead to the ground, Kyle went back to searching for targets. He killed two more enemies that day, and his sniping partner shot two more. When the marines advanced deeper into the city, the two SEALs could no longer cover them from their position. They shouldered their rifles and equipment and began the long trek into Fallujah.

Kyle is one of America’s most famous snipers. Born April 8, 1974, in Odessa, Texas, he grew up raising cattle but eventually heard the call to military service. He joined the Navy and completed his initial SEAL training in March 2001, only six months before the September, 11, 2001, attacks against the United States by Osama bin Laden’s Al Qaeda militant Islamist organization. Kyle received training as a sniper during his navy service and put his new skills to use during operations in Iraq over the course of his four tours in that war-torn country.

Special-operations personnel have a wider variety of equipment and weapons to choose from than regular troops, who are generally issued standardized weapons. Snipers in special-operations organizations are no exception and often have several rifles, each best suited to a different situation. Kyle could choose which rifle to carry based on the location and tactical requirements of an upcoming mission, and sometimes he took more than one. Different rifles were effective out to different ranges and fired different caliber cartridges, each with unique ballistic qualities. These weapons were equipped with various accessories, such as optical sights (scopes), suppressors, bipods, and DOPE cards (“Data on Previous Engagement”)—small cards with ballistics data to aid the sniper in shooting over various distances.

Perhaps the most basic weapon Kyle carried was the MK12 Special Purpose Rifle. Essentially it is the same rifle as the standard U.S. military M16, except it has an 18-inch barrel instead of the standard 20 inches. The MK12 fires the same 5.56mm round, also known as the .223, and uses the same magazines; the standard magazine has a capacity of thirty rounds. It can fit several different types of optical sights as well as suppressors.

Kyle made one modification to his MK12: He took the lower receiver from his M-4 carbine and mated it to the upper receiver of his MK12. The M4 has a more compact, adjustable, collapsible stock, making it easier to carry and use in cramped conditions, such as clearing a building. Later, some MK12s came fitted with collapsible stocks. The lower receiver also contains the weapon’s trigger group, making Kyle’s rifle capable of fully automatic fire. Though he preferred not to use his weapon on fully automatic, Kyle wanted to have the capability in case he needed it to lay down suppressive fire.

Kyle was not entirely pleased with the MK12’s 5.56mm cartridge. He found that it often took several shots to bring down an enemy fighter unless he were hit squarely in the head. This was especially true in Iraq, where many insurgents used drugs in the hopes of making themselves braver and more resilient.

Kyle carried his MK12 on patrol in Ramadi in 2006, a particularly dangerous city in Anbar Province in western Iraq. His SEAL platoon of 16 men supported an Army National Guard unit tasked with retaking the area around a hospital near the Euphrates River.

The day began with house-to-house searches as the Americans took back the area street by street. Kyle was on point, leading his group as they cleared houses. He held his MK12 at the ready as he entered each building, the first man in.

The group secured each house, ensuring no enemy fighters hid inside. Afterward, Kyle would go the roof and cover the troops on the ground with his rifle. Soon the enemy attacked, using a mosque to launch their assaults. The fighting quickly spread, the insurgents firing their AK-47s and the Americans replying with rifles, machine guns, and grenades. Kyle covered the army troops as they maneuvered to the mosque, giving covering fire as they approached. When the soldiers reached the mosque, the SEALs raised their fire to allow their fellow Americans to get into the building under it. The attack succeeded, though Kyle received a small wound: A piece of hot brass from a nearby machine gun fell between his boot and his leg during the fight. When he removed it later, a piece of skin came away with the brass casing.

Though able to make effective use of the MK-12, Kyle more often used a similar weapon, the MK11 Special Purpose Rifle. Also known as the SR-25, the MK11 is a scaled-up version of the M16, chambered for the larger 7.62 x 51mm cartridge, known to civilian hunters as the .308. The fixed-stock MK11 uses a 20-round box magazine and can also be fitted with a variety of optics and suppressors for its 20-inch barrel.

Kyle considered the MK11 a versatile weapon, one he could carry on patrols and still be useful in a sniping role. He generally removed the suppressor at the start of a mission, only putting it back on to make a sniper shot. The 7.62mm cartridge had more power than the smaller 5.56mm; Kyle found it generally able to put down the enemy with one shot. He did recall it was less reliable in the field—it jammed more frequently, something he thought was due to the dust cover, which covered the weapon’s chamber and bolt area. This feature is common to M16-pattern weapons, but in the MK11 it seemed to induce a malfunction known as a double feed, where two cartridges try to load into the chamber at the same time. Leaving the dust cover open seemed to prevent the problem most of the time.

For even longer-ranged shooting, Kyle and other SEAL snipers used the more powerful .300 Winchester Magnum round fired from a bolt-action rifle designated the MK13. The version issued to SEALs used custom barrels mated to the action from a Remington 700 rifle, fitted to a stock made by either MacMillan Firearms or Accuracy International, both companies active in precision-rifle manufacture. The powerful cartridge is accurate to over a thousand yards and is a “flat shooter,” requiring little adjustment to fire over ranges from 100 to 700 yards. Kyle used this weapon for most of his sniping and stated he made most of his kills with it.

He used the .300 Winchester Magnum during a mission near the Euphrates River. As he watched from the roof of a building, a group of sixteen insurgents emerged near the shoreline. They were heavily armed and wore body armor; Kyle found out later they were a group of Tunisian militants. Strangely, they also carried four large, colored beach balls. As Kyle watched, they split into groups of four and started swimming across the river using the beach balls for flotation. He quickly realized the most effective way to engage; shoot the balls. The first shot popped a ball, causing the heavily laden insurgents to flail in the water. Kyle shot each ball in turn and watched as the Tunisians fought each other in the water to get a grasp of the remaining balls. Soon all the beach balls were gone, and most of the enemy drowned. Some nearby Marines shot the rest. Shortly after this incident the SEAL sniper made a shot at 1,600 yards, slightly less than a mile.

Kyle learned to use guile as well as his .300 Winchester Magnum. Once he set out an American flag as a lure; when the enemy fighters came out to shoot at it, he opened fire, killing half of them. On another occasion, he saw two men on a moped drop an improvised explosive device as they drove past an American position. Kyle took careful aim and fired at the fleeing enemy at 150 yards. The bullet hit the moped’s passenger and continued through the driver. Both were killed by the lethal shot.

The fourth rifle Kyle used in Iraq was the heaviest. The .338 Lapua is another bolt-action weapon, with different models used from MacMillan and Accuracy International. It lacked a suppressor, but the cartridge’s power and range approached that of the M2 .50-caliber Browning Machine Gun round. Like the .50, the Lapua could be used against vehicles, though Kyle remarked the best way stop a vehicle was to shoot the driver. Shooting the vehicle’s engine compartment would cause leaks and stop the vehicle eventually, but never right away. The .338 Lapua also made a lot of noise and concussion, which made it painful to shoot indoors. Kyle did not specify what type of .338 Lapua he used, but it was likely the Macmillan TAC-338.

Kyle achieved his longest reported sniper kill with the .338 Lapua. His group had taken over a house at the edge of small village and he’d brought that rifle, thinking there would be more long-range shooting. The immediate area grew quiet, so Kyle started scanning the next village, over a mile away. Soon he spotted a man on the roof of a one-story building, 2,100 yards distant. Even with the 25-power scope on his rifle, Kyle could make out little more than an outline. Shortly after, a U.S. Army convoy appeared on the road outside the village. The man on the roof hoisted an RPG to his shoulder, something Kyle could make out through his scope.

There was no direct radio contact with the convoy, which continued ahead toward the threat. Kyle decided to shoot. He did not expect to hit him at such an extreme range but hoped it might frighten the insurgent and dissuade him from firing. Kyle fired, and watched through his scope as the shot hit the man, sending him tumbling over the low wall around the roof to the ground below. It was the longest shot he made in Iraq. Later in the day his unit withdrew after a heavy enemy attack, for there was no longer any reason to stay.

Kyle served four tours in Iraq, with a record of more than 150 verified kills. He received multiple commendations for heroism over the course of his tours of duty, being awarded the Silver Star, four Bronze Stars with “V” devices, and a Navy and Marine Corps Achievement Medal.

After his service he returned to his native Texas, where he started Craft International, a consulting and training company for military and law-enforcement snipers. On February 2, 2013, Kyle and a friend took a former Marine suffering from post-traumatic stress disorder to a shooting range. That man, Eddie Routh, shot both Kyle and his friend, tragically ending the life one of the U.S. military’s most successful snipers.