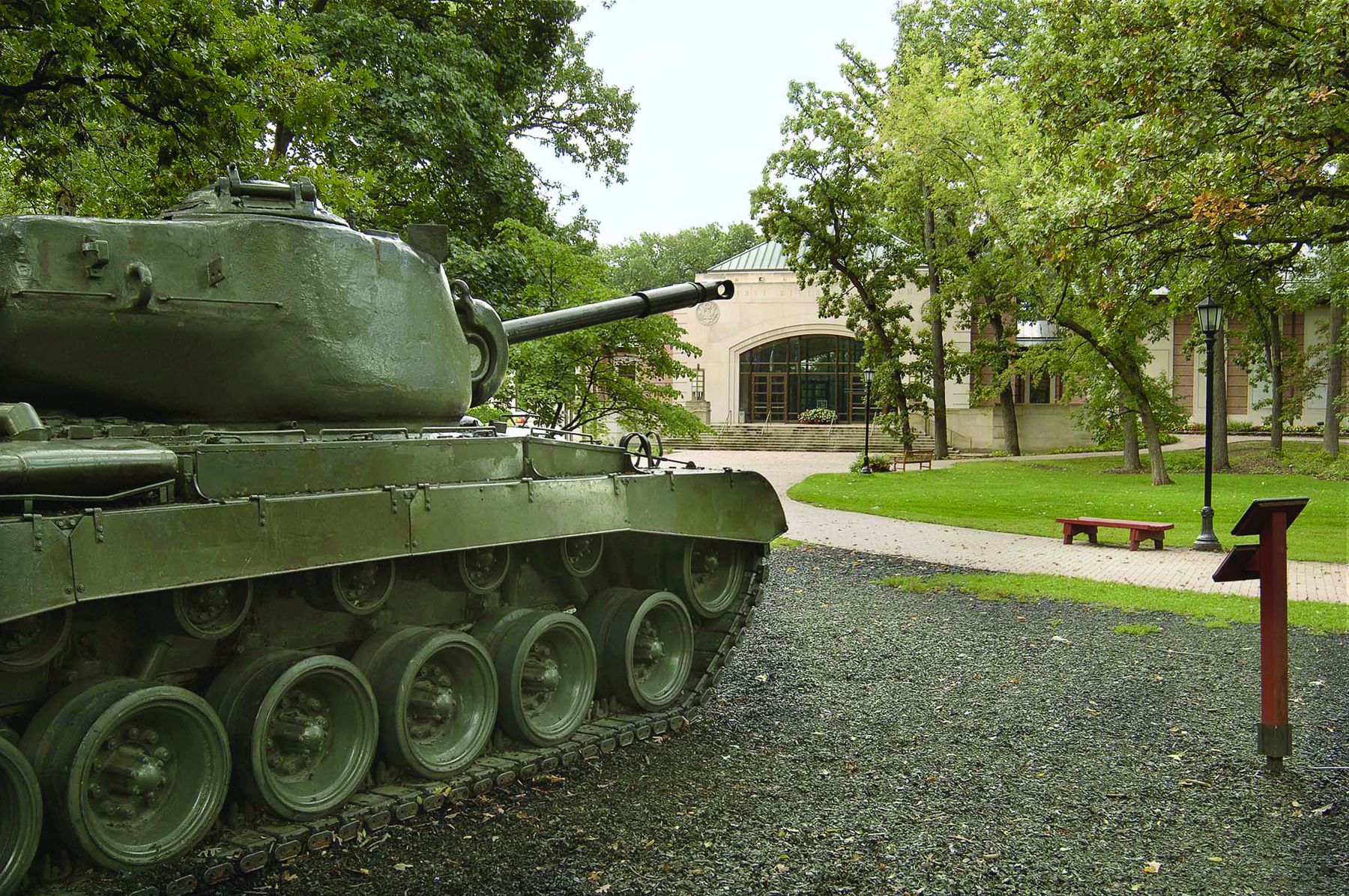 Photo Credit: One of several tanks guards the entrance to the 1st Infantry Division Museum at Cantigny Park in Wheaton, Illinois, outside of Chicago.

The 1st Infantry Division Museum puts visitors into the heart of the action.

One of America’s finest military museums, the 1st Division Museum near Chicago, presents the history of America’s oldest division––from its inception in World War I, through World War II, the Cold War, the jungles of Vietnam, and Desert Storm. Located in the midst of the 500-acre Cantigny Park in Wheaton, Illinois, the museum is visited by over 140,000 people annually and is known for its realistic exhibits and immersing galleries.

The story of how the museum became located 25 miles west of Chicago can be traced back to the battlefields of France in World War I. There a “citizen soldier” commanded the 1st Battalion, 5th Field Artillery of the 1st Division at the Battle of Cantigny, which was the first American victory of World War I. That citizen soldier was Robert R. McCormick, the 37-year-old publisher of the Chicago Tribune. The war would be a defining moment in his life. And for many years he would host reunions for his fellow 1st Division comrades on his estate in Wheaton, which he renamed “Cantigny” to commemorate his division’s achievement.

Colonel McCormick passed away in 1955, but in his will he left his estate “for the recreation, instruction, and welfare of the people of the state of Illinois.” To honor his service with the division, the original museum opened in 1960 in the renovated stables on the estate in what is now the visitors’ center. It moved in 1992 to its current 38,000-square-foot building.

In the main exhibit hall, visitors go through the ruins of the tiny French village of Cantigny and walk down a World War I trench. They then follow the World War II division through North Africa and Sicily where the Big Red One was led by the likes of Terry Allen, Teddy Roosevelt Jr., and Clarence Huebner. They sit in a landing craft on D-Day and walk onto Omaha Beach before entering a German bunker and then face an oncoming Sherman tank in the Battle of the Bulge. They meet World War II correspondent Jack Thompson to learn his story before seeing an actual door from Nuremburg Prison. Visitors then trek down a jungle trail in Vietnam and on to Desert Storm.

The 1st Division Museum at Cantigny has, as its mission, to preserve, interpret, and present to the public the history of the 1st Infantry Division in the broader context of American military history in order to promote learning about American military heritage and affairs. It does this in a variety of ways besides the galleries. There is an exciting outdoor collection of military vehicles and equipment. The “tank park” has seen generations of children climbing on the various tanks and artillery pieces from World War I to Desert Storm, enjoying and learning as they play. Each piece of equipment has a sign explaining what it is and how it worked.

Also located in the museum is the Colonel Robert R. McCormick Research Center, home to the museum’s library, archives, and photo collections. It has been described by Pulitzer Prize recipient Rick Atkinson, author of An Army at Dawn and The Day of Battle, as “among the finest unit archives in the world.” It is home to a collection of more than 10,000 military books, including rare unit histories and drill and doctrinal manuals; some 100,000 documents pertaining to Colonel McCormick and the Chicago Tribune during his tenure as its owner, 1911 to 1955; and more than 50,000 official and personal records of the 1st Infantry Division, 1917 to the present. Among the latter are more than 500 oral histories of 1st Division veterans. The museum is currently working with the active 1st Infantry Division to document its most recent history in the Balkans, Iraq, and Afghanistan.

The museum is located at:

The museum is closed in January and open select days in February, so please call ahead.

Parking is $5.00. Admission to the museums on the estate is free.

Update: The First Division is temporarily closed for a redesign: The Museum will reopen August 26, 2017.