The versatile, quick-firing M60 machine gun became one of the iconic weapons of the Vietnam War.
Carl Gnam
No comments
Categories: Military History

The time was early 1967, the place a crowded square over a body of water on a narrow bridge in downtown Saigon. A 19-year-old American Army gun jeep commander in the 199th Light Infantry Brigade stood at his post in the rear of the vehicle. Both he and the driver wore .45-caliber pistols and carried M16 rifles. Besides the pistols and rifles, the Americans also had an M79 grenade launcher on the floorboards of the jeep, covered with heavy sandbags in case the vehicle hit a Vietcong landmine. The jeep’s principal weaponry that day was the deadly United States Army standard-issue M60 machine gun, which—like the M14 rifle—fired the basic NATO round of 7.62mm ammunition. With the exception of the 1911-introduced .45, the other three weapons had been brought into the NATO arsenal at about the same time, in the early 1960s. The reason was simple, to ensure that all NATO armies were armed with the same weaponry and ammunition for ease of common supply in case a land war erupted in Europe with the Soviet Union and its Warsaw Pact allies: Poland, Hungary, Czechoslovakia, Romania, East Germany, Bulgaria, and Albania.

Surrounded by a Sea of Swarming Humanity

Instead of Warsaw Pact soldiers, however, American weapons that day were being employed against two Communist armies on the other side of the world in Southeast Asia: the North Vietnamese Regular Army and the South Vietnamese civilian guerrilla forces, the Vietcong. As combat military policemen, the Americans in the jeep had been assigned to road convoy duty, getting infantry into and out of the field under fire. The young lieutenant was somewhat alarmed to be surrounded by a sea of swarming humanity, their intentions unknown. On the other hand, he knew that he was armed with one of the best machine guns in the world, mounted on a cast-iron swivel just under his right armpit. If he and his men had to fight their way out, they were ready. As it happened, they were in luck; the Vietnamese allowed them to pass unharmed.

The M60 machine gun was what the military called a “crew-served weapon,” requiring a team of three soldiers to transport, load, and fire it. It was capable of several types of fire: grazing, plunging, flanking, oblique, and enfilading. Aside from vehicular-mounted fire, it could be fired from the shoulder (kneeling and standing) and from a prone position as well. Its available ammunition consisted of ball (for use against light materials and personnel and for range training); armor-piercing (for use against lightly armored targets); tracer (for observation of fire, incendiary effects, signaling, and training); dummy (for use during mechanical training); and blanks (for use during training when simulated fire was desired; a blank firing attachment was required to fire this ammunition).

In any modality, the M60 machine gun was a fearsome weapon of great potency. Like other weapons in the American military inventory, the M60 general purpose machine gun (GPMG) began its evolution at the end of World War II. The Allies had been impressed with the flexibility provided by the German GPMGs, and the American M60 incorporated a modified feed mechanism based on that of the German MG42, with the operating mechanism of the FG42 assault rifle. The initial version of the M60 was officially adopted by the U.S. Army in 1957.

Eventually, the M60 would go on to replace both the Browning light and heavy machine guns in the American arsenal, with its initial prototype being the T44. Its feed mechanism was bettered with two more variants until the T161 was produced and was introduced into the U.S. armory as the M60 GPMG. It could be used in both a bipod configuration for rapidly advancing infantry on the move or for defense when mounted on a M112 tripod as a heavy machine gun.

Yes, There Were Some Drawbacks to the Design…

The M60 was 42 inches long and weighed a little over 23 pounds. It was gas operated, with a 50-round link belt of 7.62mm ammunition and a muzzle velocity of 2,800 feet per second. Its maximum effective range was 1,200 yards with the bipod and an additional 329 feet when the tripod was added. Optimal operating range was about 3,900 feet. Moving away from the recoil mechanism of the Browning machine guns, the M60 was designed as a gas-operated weapon. As the first round traveled down the barrel, it pushed gas into the gas cylinder through a hole in the bore. The pressure in the cylinder then forced a piston down the chamber, moving back the bolt and chambering the next round into place. The cycle could be repeated for as long as the trigger was depressed.

With no gas regulator on the gun, however, there were drawbacks to the mechanism. Accumulated dirt or dust could slow down the piston and result in the M60 jamming or “running away”—continuing to fire even when the finger was removed from the trigger. This could prove unnerving during the heat of battle, when the assistant M60 gunner would be forced to hold onto the ammunition belt manually to stop it from feeding. One distinctive feature of the M60 was the chromium-plated barrel and satellite liners for the first six inches along the muzzle from the chamber. The nonferrous lining considerably increased the lifespan of each barrel although there were complaints that the barrel was heavy. 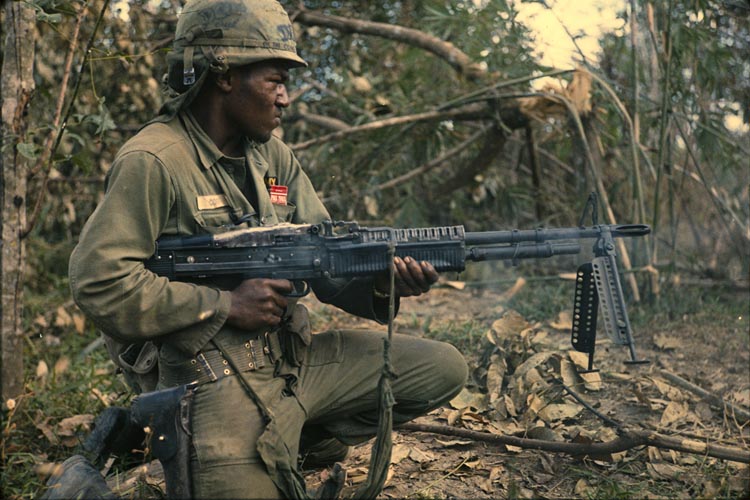 …But the M60 Was Used in Every Conceivable Role in Vietnam

In the Vietnam War, the M60 was used in every conceivable role for a machine gun: mounted on trucks, jeeps, armored personnel carriers, and other vehicles; on tripods inside fortifications; on aircraft and boats. The M60 saw its widest use with American infantry forces on the ground in Vietnam. An infantry machine-gun section officially consisted of three soldiers: the gunner, the assistant gunner, and the ammunition carrier. In practice, all members of a patrol carried extra machine-gun ammunition, which was passed up to the gun crew when needed. American infantrymen carried belts of ammunition draped around their bodies. This was the easiest way to carry the heavy load, and it left the soldiers’ hands free to use other weapons.

The most common complaint about the M60 was that it was heavy, particularly when humping through the Southeast Asian jungle. It was also prone to jamming, especially when dirty. The safety was awkward to operate and worked opposite the M16 rifle, requiring an upward movement of the thumb to free the safety and make the gun ready to fire. Fired cartridges could also become torn and required extra time to remove an empty case—a less than ideal situation in combat. Marine units in particular resisted using the M60, preferring their longtime BARs.

The M60 operator’s manual recommended that soldiers not open ammunition containers until the ammunition was to be used, noting that ammunition removed from the airtight containers, particularly in damp climates, was likely to corrode. The manual further directed: “Do not expose the ammunition to the direct rays of the sun. If the powder is hot, excessive heat may be developed when the gun is fired. Do not oil or grease ammunition. Dust and other abrasives collecting on oiled or greased ammunition will damage the operating parts of the gun, and oil on cartridges will produce excessive chamber pressure.”

Variants of the M60 included the short-lived M60B, which was designed to be fired by hand from helicopters. The B model had no bipod and featured a different rear stock than the regular model; it retained its pistol grips. The M60C lacked pistol grips, but its main difference was the electronic control system and hydraulic swivel system, which allowed it to be fired from cockpits on OH-13 Sioux, OH-23 Raven, UH-1B Huey, and Ov-10 Bronco helicopters.

Other Stories on the Weapons of the Vietnam War: