With the “Ragtag Circus” Across Europe: The Story of Frank Fauver

The 83rd U.S. Infantry Division had been mobilized for World War I in September 1917. Its unit patch was a downward-pointing black triangle with the letters O-H-I-O stitched as an abstract gold monogram in the center. Read more

The first time Adolf Hitler ventured into the captured territory of the Soviet Union was six weeks into the campaign on August 4, 1941, when he traveled to Borisov to the headquarters of Army Group Center and its commander, Field Marshal Fedor von Bock. Read more

Mired in combat during the Battle of Hürtgen Forest of Germany, an American soldier wrote in December 5, 1944: “The road to the front led straight and muddy brown between the billowing greenery of the broken topless firs, and in the jeeps that were coming back they were bringing the still living. Read more

The Hollywood military film devotee will remember the beginning of the epic, A Bridge Too Far, when a young British airborne officer named Fuller informs Lt. Read more

After almost two months of bloody and desperate fighting, the Allies had failed to break through the German defenses that had been limiting their hold on Normandy since D-Day. Read more 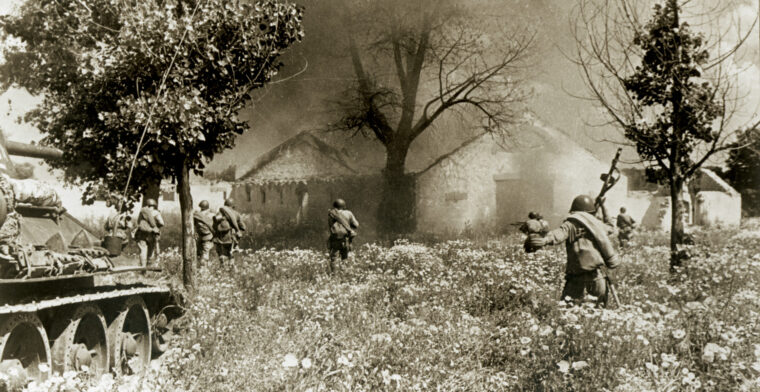 The Battle of Targul Frumos: A Defensive Stand on the Eastern Front

May 1, 1944. Marshal of the Soviet Union Ivan Stepanovich Konev had a right to be pleased with himself and his men as he gazed at the maps spread before him. Read more