Profiles of the American Revolution 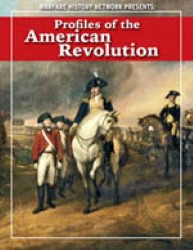 Turncoats, nefarious plots and intense sea battles: you’ve never read anything like this!

The American Revolution sure wasn’t what it was cracked up to be.

More than just a series of decisive battles and military victories, the American Revolutionary War was a massive political transformation that took eighteen years to fully realize. There’s much more to the story besides the Boston Massacre, the Battle of Bunker Hill and Washington crossing the Delaware.

And at Warfare History Network, we strive to give you those untold stories.

This very special free briefing on the Revolutionary War contains stories you’ve likely never heard. By the time you put it down, I guarantee you’ll never view our War for Independence the same way ever again.

Our free briefing starts by taking you to a fall morning in 1776, three months after the Colonials declared their independence. Brigadier General Benedict Arnold begins to pace restlessly on board his flagship, Congress.

Arnold was waiting for word that the British were finally on the move near Lake Champlain. Sometime between 7 and 8 that morning, the schooner Revenge reported solid but troubling intelligence: the British, initially quiet, were now sailing down the lake in full force.

This was at least two years before Arnold stated entertaining thoughts about changing sides. When he heard the news, he readily anticipated taking some decisive action, and winning fresh laurels for himself and his country.

His enthusiasm, however, was short-lived. Arnold soon met with Brig. Gen. David Waterbury, his second in command.

As you’ll learn, the Americans were extremely outnumbered by the British. Their own ragtag rebel fleet, 15 vessls in all, were currently sheltered in a channel near Valcour Island. Waterbury feared that in addition to their poor numbers, the channel was a potential trap—once the British learned of their whereabouts, their fleet would be quickly overwhelmed and destroyed.

“General Arnold,” Waterbury said, “I urge you to come to sail and fight them on a retreat in the main lake.”

Would Arnold heed his second in command’s advice?

Inside, you’ll learn all about Arnold’s daring plan that successfully held off the mighty British Navy, and selflessly bought precious time for the desperate Patriots.

We’ve all heard about Arnold becoming a turncoat—now learn all about his accolades at the start of the Revolutionary War inside our special briefing, absolutely free.

Of course, along with Arnold, Aaron Burr stands out in American History as one of its quintessential villains. In addition to killing Alexander Hamilton in their famous duel, he later plotted an insurrection to form a separate country in the American Southwest.

But Burr wasn’t a lone conspirator; he had allies whom he would rely upon to carry out his nefarious activities.

Our second story in Profiles of the Revolutionary War focuses on James Wilkinson, one of Burr’s main accomplices. Did you know that while Wilkinson was serving as an officer in the American Army, he acted as a secret agent for the Spanish government, who designated him “Agent 13”?

As a veteran of the Quebec campaign along with Arnold, Wilkinson was a student of medicine and came from a well-to-do merchant family in Maryland. How did he become such a scoundrel? As you’ll read in our free briefing, Wilkinson had a knack for always being in the wrong place at the wrong time.

The Quebec campaign foundered when the British threw 8,000 men onto the field, and after the defeat, Wilkinson served under General Horatio Gates in 1776. Then he became involved in yet another fiasco at Fort Ticonderoga.

It was soon after this second defeat that Wilkinson became involved in a plot by several other officers to overthrow General George Washington, known as the Conway Cabal.

The plot failed of course, and after the war, Wilkinson moved to present-day Louisville, Kentucky, to enjoy a large plot of land away from the more settled regions of Colonial America. But before heading west, Wilkinson began a secret correspondence with Aaron Burr, and once again began plotting.

What did he and Burr agree to? How long did Wilkinson play double agent for the Spanish before finally being found out? The answer will likely surprise you, and it’s all told here in our free briefing.

Our third story takes you to 1779: the American Revolution had been under way for more than three years, and at this point, there was no end in sight. British High Command in London had just conceived a new military strategy designed to supply its twice-failed attempt to sever New England from the rest of the American colonies. This would entail taking the fight into the Carolinas and into Georgia, where southern loyalists and friendly Indians would provide the Crown much needed support for its army and navy.

The first step in this plan was to establish a military base on the northeastern coast of America, between Boston and the Canadian border. The British Navy had its eyes on Penobscot Bay in Maine.

Of course, the Colonials had no intention of handing over the bay to the British. However, despite some gallant fighting, their counter-offensive was rife with problems. Without exception, every American vessel involved in the Penobscot Expedition were captured, scuttled or burned. American sailors and soldiers who had fled into the woods without food or supplies were forced to embark on a grueling four- to six-week trudge through unforgiving wilderness back to Boston. In the end, 16 warships were burned, including 13 warships and the Americans suffered 474 casualties.

Upon receiving the news of this terrible defeat, the General Court promptly started casting the blame at those involved.

..Would you believe that one of the scapegoats the Court implicated was one of America’s most famous heroes?

Because of his position as leader of the artillery train on the Penobscot Expedition under Gen. Solomon Lovell, Revere was relieved of his command and placed under house arrest shortly after returning to Boston. Serious charges of misconduct, including “disobedience of orders and unsoldierlike behavior tending to cowardice” were lodged against him by Marine Captain Thomas J. Carnes and Brig. Gen. Peleg Wadsworth. An inquiry in November 1779 found Revere to be guilty of culpable behavior.

How did Revere regain his reputation? As you’ll read in our free briefing, it had very little to do with military matters.

At Warfare History Network, we strive to bring you the whole story behind the key events that shaped the world. You’ve likely heard all about Benedict Arnold’s traitorous history, Aaron Burr’s secret scheming and Paul Revere’s famous ride. But after reading these three stories, we’re hoping you’ll develop a new appreciation for these iconic figures in American History. Best of all, they’re absolutely free. What are you waiting for? Download your free copy of Profiles in the Revolutionary War and acquaint yourself with the untold stories of Colonial America.

P.S. What do you think? Should Benedict Arnold’s full war record be taken into account when judged in the history books? Does Revere still deserve his widespread acclaim as an American hero? Let us know in the comments below!