“There were times you would shake so long that you were embarrassed because you looked like you were scared to death.”
—Major William F. Hancock

“My commander’s reply is ‘Nuts.’ It means ‘Go to hell.’ You understand that, don’t you?”
—Aide to General Anthony McAuliffe 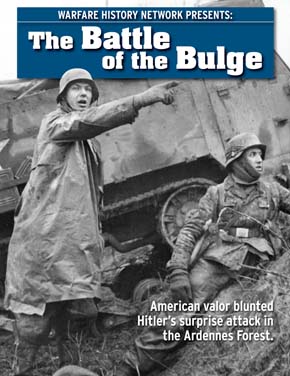 The Battle of the Bulge began as a crushing counteroffensive that took the Allies by complete surprise. In the end, it would be one of their finest hours.

Like many great endeavors, the facts—90,000 Allied casualties, 340 German tanks behind a 13-division coordinated assault—do little to tell the story. So in our special report, The Battle of the Bulge, we aim to bring you the personal stories of hardship and valor at which the numbers can only hint. Inside these pages, we’ll show you the Bulge as the soldiers themselves saw it, from the foxholes to the thick Ardennes Forest.

…And we guarantee you’ll come across more than a few surprises, with stories like:

Bruce Clark’s Moment of Truth at the Battle of St. Vith

In the early hours of Sunday morning, December 17, 1944, an American Brigadier general suffering from piles was heading into the unknown. On that gray dawn, with the guns rumbling to the east, the newly promoted general was being driven in a looted Mercedes to St. Vith, a Belgian town located a few miles from the border with Nazi Germany…

As you’ll see, General Bruce Clarke would begin his legacy that December 17, but he didn’t know it then. The rugged commander had been trained at West Point to become an engineer, not an infantry commander. He was born into a large and poor family in a tight apartment above a grocer’s shop. He had seen some combat prior to the Battle of St. Vith, but didn’t leave much of an impression on his superiors.

“You’re a damned nobody, Clarke,” Patton exploded once during a visit. He explained to the junior general that the reason he never received the promotions he so eagerly sought was because George Marshal and his other senior commanders had never heard of him.

…The Mercedes continued plodding along the Belgian countryside. Behind it came a lone Jeep and in it, a single frightened G.I. constituted Bruce Clarke’s total defense in the tense region between Bastogne and St. Vith. As he, Clarke, and the Mercedes learned later, they were heading straight for a military SNAFU the size of which would have likely frightened any senior Allied commander…

The day before, the entire German Army, the 5th Panzer, had struck the 60,000 men of the U.S. VIII Corps with disastrous results. The 106th Infantry was now trapped and virtually surrounded in the Eifel Mountains just across the border in Germany. Its neighbor, the 28th Infantry, had been split in half and pulled back in great disorder. What remained of the VIII Corps—a mixture of unblooded infantry divisions and those who suffered appalling casualties in November—was on the verge of total collapse. One more German breakthrough, and the fate of the VIII Corps would be sealed.

“I was being thrown into a situation the like of which I had never known up to then and fortunately never have since,” he recalled long afterward.

So what exactly happened to Clarke and the men of the VIII Corps during the Battle of St. Vith? As you’ll read inside, his deeds at this remote border town would start a reputation where so many other senior officers would have had theirs destroyed. It would carry him to the highest echelons of the U.S. Army, where he would become a trusted military adviser to a series of U.S. Presidents.

…But we don’t just focus on the commanders—inside our Battle of the Bulge free report, you’ll also hear from the soldiers:

A Desperate Christmas Eve During the Siege of Bastogne

Shivering and stamping their feet in the snow, three American soldiers warmed their hands over a small fire at an observation post. They were weary, dirty, hungry, and quite a long way from home.

After awhile, three other G.I.s shuffled in to relieve them. “Merry Christmas,” one of them said as they passed.

The first three looked up in surprise. “We thought tomorrow was Christmas,” one of them said slowly.

The soldiers were exchanging stations around a town not far from the Luxembourg border, but there was not much cheer to go around during that snow-covered fog-shrouded December 70 years ago. German forces surrounded them, and the Siege of Bastogne was in full swing.

What was it like for the men during this desperate Christmas season? As you’ll read inside, the G.I.s were surrounded, outnumbered four to one and completely cut off from supplies and relief, but history would have us remember it well: these American soldiers were writing a glorious chapter in the history of their army. After the month-long standoff, the name Bastogne would be stitched proudly on American battle flags alongside Yorktown, Gettysburg and Pork Chop Hill.

But writing history wasn’t easy. German bombs and artillery shattered the relative quiet of that poignant Christmas Eve. One struck a medical aid station, killing 20 patients and some nurses with falling debris. Army ambulances roared through the dark and shambled trees as volunteers tried frantically to find survivors.

That evening, a tired and weary Anthony McAuliffe radioed General Middleton at his Neufchateau headquarters. “The finest Christmas present the 101st could get,” he said somberly, “would be a relief tomorrow.” Middleton replied just as gravely, “I know, boy, I know.”

But even amidst the bombings, there were scenes of relative comfort and camaraderie. In the transept of the vaulted chapel in Abbé Musty’s seminary, officers and G.I.s sang carols while wounded men listened in, lying on stretchers and stone floors. Bright moonlight filtered through broken stained glass windows, and snow sifted from cracks in the roof as voices chorused “O Little Town of Bethlehem.”

So how did the 101st prevail? What other wonders (and terrors) did they bare witness to in the Christmas of 1944? You’ll find out inside this special free report.

These And Other Stories Inside

Thwarting Adolf Hitler’s last major counteroffensive didn’t happen overnight, and the successes of Allied forces at Bastogne and St. Vith came at a heavy cost. We hope that by reading these stories, you’ll develop a new-found appreciation for the soldiers, nurses, doctors and commanders who sacrificed everything in December 1944. And please let us know what you think by leaving a comment; we’d love to hear which stories you liked best.