The Battle of Gettysburg: Turning Point of the American Civil War 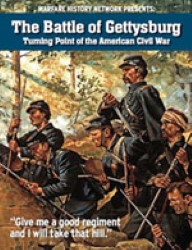 Get to know the stories behind the statistics inside this special free report on the costliest battle in Civil War history.

The importance of the Battle of Gettysburg to American history cannot be overstated. Those three days in July 1863 were responsible for the largest casualties of the entire war. It was also what many call the Civil War’s turning point, in which Ulysses S. Grant finally gained some initiative over Robert E. Lee. And, of course, it prompted Abraham Lincoln to deliver the famed Gettysburg Address.

But it was a complicated campaign, and due to its sheer numbers, iconic commanders and myriad events, it can be difficult to see the Battle of Gettysburg as the men on the field might have seen it. (In the words of historian Bruce Catton, the town “looked as if some universal moving day had been interrupted by catastrophe.”)

“The Battle of Gettysburg: The Turning Point of the American Civil War” attempts to do just that: to bridge the gap between the stories and statistics, the hard fighting and mere figures.

…And best of all, it’s absolutely free.

Just what can you expect to find inside this free report? Stories like:

No Picnic at Culp’s Hill

Inside “The Battle of Gettysburg,” you’ll follow along with the men of the Army of Northern Virginia’s II Corps as they formed ranks on Hanover Road on the afternoon of July 2. Just one mile east of town, they stared anxiously at the giant boulders and towering oak trees dotting the humpbacked prominence known as Culp’s Hill. The 630-foot hill was by far the highest in their vicinity, and had long been a popular picnic site for Gettysburg residents. But as you’ll read, the once quiet Culp’s Hill would soon find itself the focus of much grimmer activities.

The day before, Robert E. Lee’s Confederates had stumbled into battle at Gettysburg before the general was willing to engage. After the general skirmish, Lee, with his trained engineer’s eyes, could see the coming battle unfolding before him…

Late in the afternoon on July 1, he sent his general Richard Ewell a politely worded message, suggesting that he attack Cemetery Hill, just west of Culp’s Hill, if he “could do so to advantage.”

The result is well-known, of course. Sergeant David Hunter of the 2nd Virginia wrote to his mother, saying, “we are in all probability on the eve of a terrible battle.” Culp’s Hill continued to be a contested site during the Battle of Gettysburg, and its loss would have spelled disaster for the Union Army.

But what was Ewell’s response to Lee’s command? Why did General Isaac Trimble, one of Ewell’s aides, throw down his sword in disgust at him when discussing Lee’s order? Inside your free report, you’ll get to read all about it.

“Full of Pluck,” If Not Accolades

Of course, “The Battle of Gettysburg” also takes a look at the lesser-known leaders that shaped the outcome of battle. Men like Colonel William Oates, who, unlike his Union counterpart Joshua Chamberlain, received scant recognition for his contributions to the battle.

Facing the 20th Maine at Little Round Top, the 15th Alabama Infantry were exhausted. Commanded by Oates, they had marched for 25 miles and nearly the entire day to reach Gettysburg. With little to no rest, Oates’ men were immediately ordered to the right flank.

“My men had to climb up, catching to the bushes and crawling over the immense boulders,” Oates wrote, “in the face of incessant fire of their enemy, who kept falling back, taking shelter and firing down upon us from behind the rocks and crags that covered the mountain side thicker than grave stones in a city cemetery.”

Inside, you’ll read the heartbreaking story about Oates’ men: after finally gaining momentum, it became evident that their incredible and tremendous drive could not be sustained. Overcome with heat and exhaustion, Oates himself collapsed unconscious and had to be carried to the rear.

What became of Oates after the war? What were his continued ties to Little Round Top long after the South accepted defeat? All this and more inside.

These Stories and More, Absolutely Free

Of course, our free briefing doesn’t stop there. In addition to the in-depth features above, you’ll also learn about Amos Humiston, and how he came to symbolize the whole of the Civil War for many citizens back home. You’ll also get to see a slew of striking war-time photographs, some of which you’ve likely never seen before.

All at absolutely no cost.

From the local residents to the soldiers who surrounded the town for three fateful days, The Battle of Gettysburg is permanently etched in history and memory.

“The truth will be known in time,” James Longstreet said of the battle, “and I leave that to show how much of the responsibility of Gettysburg rests on my shoulders.”

“In great deeds something abides,” Chamberlain said at a Gettysburg dedication in 1889. “On great fields something stays. Forms change and pass; bodies disappear, but spirits linger, to consecrate ground for the vision-place of souls.”

We hope that after reading these stories, you’ll gain a new appreciation for the battle, and how the town, the soldiers and their commanders played a pivotal role in the outcome of the Civil War. And please let us know what you think about these and other stories found inside; we’d love to hear how they’ve impacted your understanding of American history.