The Battle for Omaha Beach: The Men of the D-Day Invasion 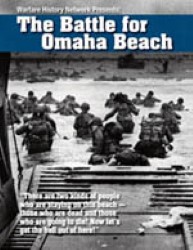 Imagine having your own special report detailing all the secret strategies and personal stories behind the Allied landing on Omaha Beach. Yes, your private D-Day invasion Warbook.

This is far more than just battle plans and casualty lists. This is the real, living history behind what was at the time the largest naval invasion in recorded history. No matter what you already know about the Normandy landing, you’ll discover new details about the men, the plans, the tragedy and the courage. You’ll learn who really won the D-Day battle, and how.

Wine for the Chaplains, Condoms for the Rifles

The Battle for Omaha Beach opens with an in-depth look at the planning that made the D-Day invasion possible. Planning for the offensive began in 1943, starting with the largely overlooked Lt. Gen. Frederick E. Morgan, a veteran of both world wars, as chief of staff.

Along with well-known studies that determined the locations for the Normandy invasion, The Battle for Omaha Beach tells you so much more: the favorite running joke among Americans stationed at headquarters in London; where artificial harbors might have been employed; how much wine the chaplains in the landing craft would need; and how rifle muzzles were protected from seawater with condoms.

And yet, despite the excruciating details that planners covered, you may be surprised to learn that they originally believed the D-Day invasion would have to wait until 1945, because the resources allotted to the planning staff were “pitiful,” in Morgan’s words, and the Normandy landings would have to be delayed.

In fact, as The Battle for Omaha Beach makes clear, Gen. Eisenhower eventually expanded the project’s scope, but it was the planning done in 1943, and the unheralded staffers who made it happen, that should be credited with the ultimate success of the D-Day invasion.

Details like this make The Battle for Omaha Beach come alive for even the most knowledgeable D-Day expert. And remember, this fascinating briefing is absolutely free.

But all the planning in the world, all the money and all the ordnance would turn out to be meaningless, if it weren’t for the men who actually threw themselves on to that beach …

‘You can’t pull heroes off the assembly line’

As this briefing makes clear, the Normandy invasion was an ugly, brutish battle whose details will make you thankful for the men who fought. The Battle for Omaha Beach details the experiences of dozens of soldiers, laying out their fear, their confusion, and their struggles even to reach the beach without drowning.

You’ll read about all this and more as the briefing takes you through the battle for Easy Red and Fox Green, two sections of Omaha Beach. You may never have read such a blow-by-blow account before, and you’ll be stunned by the failures, the frustrations and the surprises encountered by the men of Force O who executed the D-Day invasion – and all in their own voices.

It was critical that you tried to get into the landing craft when it was on the rise because there was a gap—the nets didn’t quite reach and you had to jump down. That was something we hadn’t practiced before. We had practiced going down the nets, but the sea was calm. This was a whole new experience.  – Pfc. Steve Kellman

We had been issued a puke bag for seasickness but, as it turned out, one wasn’t enough.  – Pfc. Roger Brugger

It was literally a choice between the devil and the deep blue sea. We all agreed we’d rather face the devil.  — 1st Engineer Combat Battalion officer

Follow every detail of Force O’s journey across the Channel … understand the strengths and weaknesses of the Germans’ Omaha Beach defenses … discover how some men were cut down instantly when they arrived on the beach, and how others somehow, miraculously, scrambled forward to their targets to make the Normandy invasion an ultimate success.

You’ll even crawl up the beach with the men, and learn, as this free report tells you, “It was a pitiful, foolhardy attempt, a handful of sick, soaked, and scared soldiers throwing themselves at one of the most heavily defended places on earth. There was no way it could succeed. But somehow, incredibly, it did.”

And why? Because of the men themselves. Not their guns, not the ships, and not the gear they carried in their 60-pound packs.

We sometimes forget that you can manufacture weapons and you can purchase ammunition, but you can’t buy valor, and you can’t pull heroes off an assembly line. — Platoon Sgt. John B. Ellery

You’ll read all of these D-Day moments in their painful, tragic yet heroic detail, because Warfare History Network is the foremost Internet authority on the greatest war in history. Our researchers and writers have honed their expertise over many years on the subjects that fascinate you. We collect first-hand stories and rare photos that you’ve never seen before. And our detailed maps illustrate every battle in clear relief, so you can study them and understand them like never before.

The Battle for Omaha Beach shows just how effective our D-Day invasion research is: It features the intimate thoughts of privates and officers, photos of men who never came back, the strategies that worked, the mistakes that were made and the courage that overcame them. It’s written in plain, accessible language that never talks down to you, just like all our articles. And, of course, it’s free.

A Veil of Tears Hung over Bedford

Finally, The Battle for Omaha Beach brings you an untold story of sacrifice – not just of one man, or a family – but of an entire town. Bedford, Virginia, was a quiet rural community still struggling to emerge from the Depression, filled with young men who thought that joining the National Guard in the late 1930s would be an easy way to earn a little extra money – about $30 a month.

These young men – farmers, cooks, soda jerks – suddenly found themselves on a ship headed for England in 1942, destined to lead the charge in the Normandy landing. You’ll meet the Stevens twins, one of whom didn’t make it back home. You’ll meet Capt. Taylor Fellowes, who never gave up on his boys.

You’ll even meet Major General Charles Gerhardt, the leader who, unlike so many commanders given the hero treatment in other World War II accounts, is clearly defined as a “spit-and-polish” commander with little empathy for his men, universally loathed and known as “the general with three divisions, one in the field, one in the hospital, and one in the cemetery.”

How many other accounts of the D-Day invasion tell it like it really was?

The Battle for Omaha Beach even takes you into the home front. You’ll get the inside story of the reality in Bedford, when news of the deaths so many of their own arrived – calling into service every person with transportation to deliver so many bitter telegrams. No other community in the U.S. suffered such a loss as Bedford, Virginia, yet it’s all part of a story rarely told by military historians.

In the words of Roy Stevens: “A veil of tears hung over Bedford.”

If you can’t imagine what it must have been like among the men who “slithered, like an inexorable, olive-drab swarm of angry, heavily armed insects, bent on overcoming all obstacles in their path” …

… please read The Battle for Omaha Beach right now. I promise you won’t be able to put it down until you’ve finished. It’s an unprecedented, authoritative work that tells untold stories from the D-Day invasion: finding the necessary ships, the failure of the “drenching fire” from naval bombardment to eliminate the enemy, and a new father’s determination to see his baby. It’s all in this very special briefing.

So often, the exciting, tragic and heartening stories of war that we want to read are turned into lifeless recitations of dates and facts.

Warfare History Network never makes that mistake. And to prove it, we’ve created this special free briefing, The Battle for Omaha Beach, one of the most uniquely moving, detailed stories of the D-Day invasion you’ll ever read.

The Battle for Omaha Beach is not, in short, your father’s World War II story…

And because all of this is free, you can download it now and start reading right away. I guarantee that you’ll learn things you never knew about the D-Day invasion, and put it down with a thoughtful new understanding of it all.

And that’s really what history is all about, isn’t it?

PS: It wasn’t just the grunts who impressed Sgt. Ellery when he made that statement I quoted above. Find out who really won the battle of the Normandy invasion by reading The Battle for Omaha Beach right now.