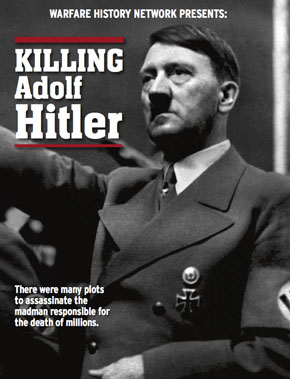 There were many plots to assassinate the madman responsible for the death of millions. Read all about them inside.

Adolf Hitler remains one of the most despised tyrants in human history. He spread totalitarianism throughout Europe, and orchestrated the invasion of Austria, Denmark, Norway, Poland and the Netherlands. He was guilty of countless war crimes, not the least of which the attempted genocide of the Jewish people.

…A lot of people wanted him killed.

“Killing Adolf Hitler,” our special free report on Germany’s most despotic chancellor, focuses on the countless assassination attempts made on Hitler’s life. Many hoped his death would bring about an end to the Second World War; others simply wanted to put an end to his atrocities. So as you’ll read inside, there were as many reasons for killing Hitler as there were attempts made and methods used.

The sniper was perched under a craggy bluff overlooking the German Führer’s alpine mountain retreat at Berchtesgaden in Bavaria. He made a slight adjustment to his highly crafted gun, aligned the sights, checked the wind conditions, and quietly waited for his target to appear. As Hitler emerged from his home into the crisp, mountain air, the assassin locked him in his sights, took a deep breath, and pulled the trigger.

…At least, that was the plan.

As World War II dragged on with no apparent end in sight, Allied leaders in Britain were seriously contemplating assassination attempts on Adolf Hitler with the sole purpose of ending the war. And inside your free report, you’ll learn all about the 120-page dossier recently gleaned from the British Public Records Office in Kew, the highest levels of British intelligence were hard set on making this happen. The code name for their covert assassination attempt? Operation Foxley.

The details of Operation Foxley were once one of the most heavily guarded secrets, and remained hidden from the public after the war. But with a recent open government policy in Great Britain, historians and those interested in the secret side of global conflict have been given unprecedented access to these secret records. And we’d like to share with you what they found.

Just what does the dossier on Operation Foxley contain? For starters, the files state in no uncertain terms their objective:

“(1) Object: The elimination of Hitler and any high-ranking Nazis or members of the Führer’s entourage who may be present at the attempt, (2) means: sniper’s rifle or bazooka and splinter grenades; derailment and destruction of the Führer’s train by explosives; clandestine means…”

In addition to military intelligence and agency documentation, our free report will also introduce you to the men behind this most secret mission. Men like General Sir Hastings Ismay, secretary of the Committee of Imperial Defense, who had Churchill’s ear in the planning stages. Or even more clandestine organizers, like the man known in intelligence circles only as “C.”

…But of course, it wasn’t just the British military who organized secret plots to kill Adolf Hitler. Members of German high command wanted him dead as well.

But what happened during these attempts? And what became of Operation Foxley? You’ll learn all about it inside.

“We Have to Use Assassination as a Substitute for Diplomacy”

Adolf Hitler was a strong believer in Vorsehung, or “providence.” The Führer felt that if anything was going to happen to him, such as assassination, there was nothing he could do about it. He had been selected by fate to achieve something great; he would not die, either by accident or assassination, until he had fulfilled that God-given mission.

And for the better part of two decades, it appeared as if providence was on his side.

Time and time again, it was providence, not planning, that had taken care of him. From the late 30s to the mid-1940s, plan after plan was drawn up to kill Hitler by his German and Anglo-American enemies—all failed. So in April 1945, Prime Minister Winston Churchill and his aides had had enough. He brought in ruthless anti-German commander Sir Arthur “Bomber” Harris to orchestrate a desperate mission to quickly end Hitler’s life.

By this time in the war, Allied intelligence felt that there were only two possible places where Hitler might be holed up: Berlin, or at his Bavarian “Eagle’s Nest.” Plans became underway for a covert bombing mission with the sole objective of taking Hitler out.

At precisely 0930 on Wednesday, April 25, 1945, pre-alarm sirens started to sound amidst Hitler’s Bavarian stronghold and the mostly deserted homes of the Prominenz. The locals who remained began to file into their air raid shelters, believing that it was just another drill or precaution. But little did they know that on Bomber Harris’ order, 170 Squadraon, part of a force of 318 Lancasters, was quickly closing in…

So what happened? If Hitler took his life five days later, what became of the bombing mission? Download our free report to find out.

Full of Action, Intelligence and Espionage

Between 1934 and April 1945, there were 28 major attempts to assassinate Adolf Hitler. Some were made by British intelligence; others, by German command and desperate individuals. And inside your free report, you’ll get an in-depth look at both the famous plots and those seldom talked about. Those that have become common knowledge to historians, and others that have only recently been uncovered.

And they’re all absolutely free.

So please download your free report today, and let us know what you think about the stories by posting a comment. We’d love to hear what you’ve learned after reading them.