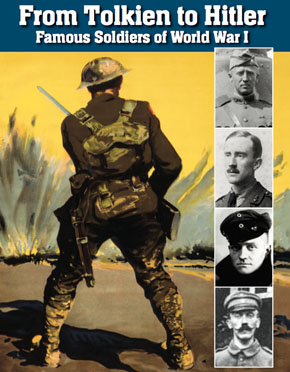 They were all veterans of the same war.

“From Tolkien to Hitler: Famous Soldiers of World War I” is a very special and FREE report on men you’re well familiar with, but focuses on exploits seldom talked about. Inside you’ll find:

A Hobbit on the Somme: Tolkien in World War I

Smoke and ash drifted across the shattered ground. Dead faces peered up with lidless eyes from pools of stagnant water. Black flying objects screeched downward, bringing terror and death to the soldiers huddled below, while on the horizon the sky blazed red-orange with flame and the entire earth shook…

This is the fictional world described in J.R.R. Tolkien’s immensely popular trilogy, The Lord of the Rings, but it was based on the awful reality of his experiences in World War I’s Western Front. Although the Great War produced an illustrious array of writers—Robert Graves, Wilfred Owen, Ernest Hemingway, E.E. Cummings and John Dos Passos, just to name a few—Tolkien, perhaps the most famous to emerge from the conflict, is almost never associated with it.

As you’ll read inside, Tolkien did not welcome the war, which symbolized for him “the collapse of all my world,” but he did enlist in the British Army in 1915, right after graduating with a first-class degree. A seemingly contradictory decision, but as Tolkien himself explained, “in those days, chaps joined up, or were scorned publicly. it was a nasty cleft to be in.”

Where might you think a man with Tolkien’s background would find himself in World War I?

As you might have guessed, because of his language expertise, Tolkien was trained in Yorkshire as a signals officer, responsible for battalion communications with headquarters. He also learned map reading, Morse code, message sending via carrier pigeon, and field telephone operation. He memorized the art of station call signs—tactical voice communications with letters or digits representing companies, platoons, and sections—and also how to use signal flags and discs, flares, lamps and heliographs as well as “runners,” soldiers who carried hand-written notes to headquarters under fire.

Tolkien received his embarkation orders on June 2, 1916. And although he did make it through the war, his fate was far from certain when he visited his wife for the last time before leaving for the front. “Junior officers were being killed off a dozen a minute,” Tolkien wrote grimly. “Parting from my wife was like death.”

Inside our special free report, you’ll learn all about Tolkien’s dreadful World War I experiences: How after surviving four hellish months and the deadly Battle of the Somme, he finally succumbed to the most humble but ubiquitous enemy of all. And perhaps most of all, how his post-war career in academia was forever influenced by his terrible time along the Western Front.

Tolkien initially denied that World War I had any influence on his subsequent writing, but later admitted that his stories had been “quickened to life by war.”

“I can see clearly now in my mind’s eye,” Tolkien recalled later, “the old trenches and the squalid houses and the long roads of Artois, and I would visit them again if I could.” He never did, however, except in some of his books. But in this special free report, you can view them alongside the famous writer as he fought in one of the hardest world conflicts in history.

The Red Baron’s Band of Brothers

The weather was largely bleak and cold when Manfred von Richthofen (or the “Red Baron” as he was later known) took up his new command in January of 1917. Near the French village of Douai, he was greeted by 12 badly trained and unmotivated pilots smoking and slouching around the muddy airfield. The Red Baron greeted them with a cold eye. “Working here,” he wrote home, “brings me very little joy.”

So how did the infamous Red Baron turn this rag-tag group of undisciplined men into the scourage of the skies in World War I?

Inside, you’ll read all about Richtofen’s determination to turn his men into efficient and deadly fighters, and how the once lazy, apathetic pilots of “Jasta 11” quickly learned that their new commander was not a paper-pushing bureaucrat: the Red Baron was instead a fearless combat leader who led by example.

And what exactly is the story behind his famous red plane?

The “Red Baron” would coyly claim in his World War I memoirs that the garish hue was an homage to the color of his old cavalry unit, but you’ll learn all about Richthofen’s well-known sense of drama and individualism inside. You’ll also read about his intent to strike fear in the hearts of his enemies, and how he encouraged his pilots to apply personal markings to their own “birds,” as they called them. Eventually, all the pilots of Jasa 11 would paint their planes some variation of red, with their own personal touches, just like their famous mentor.

Inside our free report, you’ll also learn the tragic fate of the Red Baron’s Band of Brothers, and how their reign, although glorious, was tragically cut short.

These Stories and More Inside This Special Free Report

World War I was one of the largest military conflicts in history. It involved men from more than 30 countries, and resulted in more than 9 million casualties. But so little is known about the hard and bitter fighting that ensued, or of the men who sacrificed so much for their respective countries. We hope that by reading these stories, you’ll become better acquainted with the first Great War through historical figures you’ve already come to know. And if you like the stories found inside, we strongly encourage you to comment on them below. We have a feeling you’ll find them every bit as riveting and hard to believe as we did.

P.S. Did you know that Hitler was very nearly killed in action in World War I? That a British soldier held him at gunpoint, but ultimately didn’t fire? Find out why inside!

P.P.S. Patton received a rather interesting wound during his World War I tour of duty. He wrote to his wife at the time that he was “missing half my bottom but otherwise all right.” Inside, you’ll learn all about what happened.