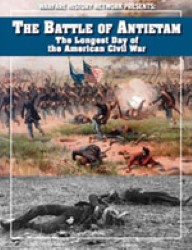 Inside, you’ll get to know the Battle of Antietam like never before.

September 17, 1862 was an especially momentous day in American history. There, among rural farmland in northwestern Maryland, 22,000 soldiers lost their lives at the Battle of Antietam, the bloodiest day-long battle in the country’s history.

But as you know, numbers hardly tell the real story.

How much have you read about the daring successes of “Little Powell” Hill, the youngest major general in the entire Confederate Army? Or Joseph Mansfield, the oldest general on both sides of the war who met his end at Antietam? Do you know what Colonel Edward Ferrero bribed his men with whiskey to muster them up to take Burnside’s Bridge in Sharpsburg?

Our free briefing, The Battle of Antietam, will answer these questions and more with over 20 pages of in-depth analysis and personal stories that lay behind the mere facts and figures. All you have to do to witness this decisive battle like the men who were in the fields is to download your free copy today.

A Stunning Victory for a Young General…

Things were looking dire for Robert E. Lee in mid-September 1862. Maj. Gen. George McClellan’s forces were steadily bleeding Lee’s much smaller army of its reserves. The Confederate general was getting desperate and he was running out of time, but he still had one final card to play.

Enter Maj. Gen. Ambrose Powell Hill and his so-called “Light Division.” Affectionately known as “Little Powell” by other Confederate officers, Hill was the youngest major general in the entire Confederate Army. But don’t let his age fool you; as you’ll read, he was an experienced officer with prior training in both the Mexican-American and Seminole Wars. He was a competent officer and bold leader.

Near Harper’s Ferry on the 17th, Hill received a dispatch from Lee around 6:30 AM. Upon learning of the general’s situation, he quickly put five of his brigades on the road toward Sharpsburg. He did not stop to correspond with Lee, knowing there was no time to waste. However, because of his quick advance, Lee had absolutely no idea where Hill was or when he might arrive.

Finally, Hill and his men burst into Lee’s headquarters sometime around 2:30 that afternoon. Having shed his jacket in the heat, Hill was easily identified among the men present by his famous red “battle shirt,” that he was known to wear when there was a promise of a good fight in the air.

Hill informed lee that he and his men were fording the Potomac River three miles out from Lee’s position and would soon be on-hand.

So what was Hill’s contribution to the Battle of Antietam? As you’ll read in our free briefing, it was the stuff of legends. Download your copy now to learn how Little Powell and his Light Division earned their place in the history books.

…And a Mortal End for One of the Old Guard.

On the other side of the battle, Union General Joseph Mansfield was getting anxious. He very well knew that the Battle of Antietam was to be the culmination of his 45-year military career.

It began as early as 1817: due to his uncle’s constant requests, Mansfield was admitted into West Point Academy just shy of his 14th birthday—the youngest ever admitted. He graduated second in his class of 40.

During the Mexican-American War, he received rapid promotions and soon became an accomplished military engineer. He also faithfully served as Inspector General of the U.S. Army.

But on the eve of battle at Antietam, he was completely unacquainted with his hastily assembled staff. Although the ordinary soldiers under his command seemed to like him, others felt that Mansfield appeared completely overwhelmed with the command he had been given. Senior Brig. Gen. Alpheus S. Williams described him as “a most stuffy, obstinate officer.”

Just after midnight on Sept. 17, Mansfield received orders to support General Joseph Hooker on his attack at dawn.

He wouldn’t last the day.

How did Mansfield fare in his final battle? What was his enduring legacy at Antietam? Download your free report to find out!

The third story in our free report focuses on the final phase in the Battle of Antietam. Along the southern end of the battlefield, the Union Army, led by Ambrose Burnside, was attempting to charge a narrow stone bridge over Antietam Creek.

On the western side of the water, a brigade of Georgian Confederate soldiers enjoyed an ideal defensive position, and had spent hours holding off the Union Army.

Colonel Edward Ferrero’s brigade was already worn out from the campaigns of previous days. He had hoped to ford the stream at a less dangerous position. This created a heated exchange between Ferrero’s aide, Lieutenant John Hudson, and Brig. Gen. Samuel Sturgis. Bitterly, Ferrero eventually consented, and agreed that he and his men would take the bridge?

How well did Ferrero’s men perform in their mission? Read inside to find out, but first, you should hear about how he broke the news to his men:

Riding up hard to his brigade, he ordered them to their feet. He started shouting:

“It is General Burnside’s special request that the two 51sts take that bridge. Will you do it?”

There was a cynical silence that followed. Corporal Lewis Patterson from the Pennsylvania ranks eventually broke it: “Will you give us your whiskey, if we take it?”

Ferrero wheeled around. Sensing an opportunity, he exclaimed, “YES, by God, you shall all have as much as you want, if you take the bridge! …I don’t mean the whole brigade,” he hedged, “but you two regiments shall have just as much as you want, if it is in the commissary or I have to send to New York to get it, and pay for it out of my own private purse, that is if I live to see you through it! WILL YOU TAKE IT?!”

The deal was struck with a triumphant “YES!” from his men.

Learn All About These and Other Stories Inside!

If you’ve ever wanted to know more about the Battle of Antietam, I strongly urge you to read these stories for yourself. You’re guaranteed to see both the battle and the men thrown into the bloody fighting in a whole new light. You’ll witness first-hand the extraordinary bravado, cunning and leadership that both sides exhibited on that fateful day in September. And best of all, it’s all absolutely free. So don’t delay: pick up your free copy today!

P.S. Did you know that nearly half a million people visit the Antietam National Battlefield every year? Read more inside to learn what historic locations have been preserved, and what Burnside’s Bridge looks like 150 years after the battle.