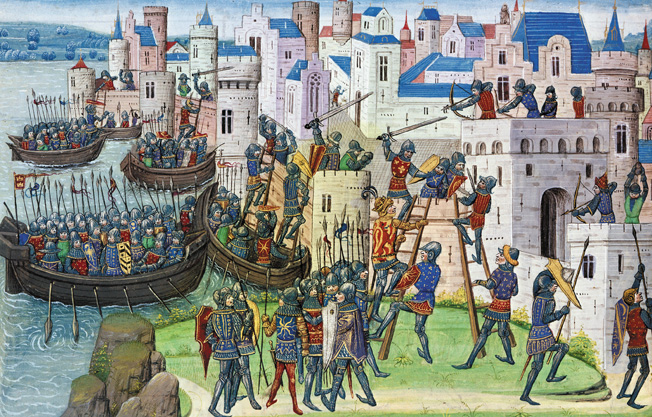 The study of military history frequently puts us in the company of our betters.

For the past twenty years, as a writer and editor, it’s been my privilege to spend a great deal of time in the company of my betters: ordinary men and women engaged in the often heartbreaking act of making history. From the safety of my office, I’ve been able to vicariously witness feats of courage so far beyond my own experience that they almost defy comprehension. In my mind’s eye, I’ve seen men charge across an open field at Gettysburg, climb the craggy slopes at Spion Kop, clamber out of landing crafts at Utah Beach, and ride into the valley of the Greasy Grass on a hazy summer afternoon in 1876. I’ve thrashed through the scrub brush at Bloody Marsh, climbed Snodgrass Hill at Chickamauga, and stood beside the lonely graves of shipwrecked British soldiers on Ocracoke Island, N.C., where, in the words of World War I poet Rupert Brooke, “There is some corner of a foreign field that is forever England.”
[text_ad]

These various acts of witness, whether they take place on an actual battlefield or at an eye-straining microfilm reader in the corner of a dusty research library, never fail to give us pause. No one can witness the courageous actions of normal people trapped in the most abnormal circumstances without feeling a certain fundamental inadequacy of response. What can one say about the Union soldiers in my hometown of Chattanooga, who climbed to the top of Missionary Ridge in the face of withering fire from Confederates at the top? Or about these same Confederates, who stood on another hillside at Franklin, Tenn., a few months later, gathering themselves to make an even more suicidal charge, one they knew they could not survive? And what can one add to the words of our great national poet, Walt Whitman, who comforted so many dying young soldiers in the Civil War hospitals in Washington, D.C.? Losing his own health in the process, he never complained about his cruel fate, saying simply, “I only gave myself. I got the boys?” It is an honor just to be in their presence.

A Humanistic Approach to History

In the course of writing four books and hundreds of magazine articles on everything from the Hundred Years’ War to Kasserine Pass, I’ve attempted to explore the common humanity behind the heroics. As an editor, I’ve tried to nurture a similar humanistic approach to history. My fellow Southerner William Faulkner once said, “the past is not dead; it’s not even past.” Faulkner was right, he usually was. It lives within all of us, whether or not we realize it. We would not be who we are without the uncountable, often anonymous sacrifices of the “thin red line of heroes” standing at our backs. They are the ones who could truly say, along with Whitman, “I am the man, I suffered, I was there.”

The best way to honor the sacrifices of the past is to ensure that they’re not forgotten in the future. That’s what we’ll continue striving to do at Military Heritage, not glorify war, but celebrate individuals. Whether it’s the lowly townspeople of Tyre, holding out against the massive power of Alexander the Great, a brand-new division of Canadian troops facing the unimaginable terrors of poison gas in the trenches at Ypres, or the often derided French army of Louis XV rising up to face the British squares at Fontenoy with their backs pressed hard against the Scheldt River.

We never want to lose sight of the basic human element behind each story. Ernest Hemingway wrote in A Farewell to Arms that the only thing sacred about any war is the places and dates of the specific battles. In Military Heritage, we will continue to give you these places and dates, but we will also take pains to supply the names of the ordinary, and extraordinary people who were there at the time. It’s our way of being there too. In the company of our betters.