The National Infantry Museum and Soldier Center in Columbus, Georgia is a tribute to the American foot soldier.

The American Infantry’s illustrious history, which is older than that of the country, comes alive in an impressive, $100,000,000, 190,000-square-foot museum located just outside Fort Benning, Georgia.

During 2009’s opening ceremonies, General (Ret.) Colin Powell aptly described the facility: “The word ‘museum’ is entirely inadequate…. It’s the only attraction in the country to tell the story of the Infantry from the perspective of the Soldier. The exhibits allow you to walk through battlefield conditions, a trench, a jungle, a desert … [giving] a glimpse of what our sons have witnessed and endured for us from Colonial times until the present.”

Galleries From World War I to Vietnam

Visitors are immediately immersed as they ascend the signature Last 100 Yards ramp––so named because infantry boots on the ground are said to own the last 100 yards of the battle. Along the incline, full-scale dioramas depict significant battles in infantry history from the Revolution through the desert wars.

From there, visitors enter the Fort Benning Gallery, which illustrates through sight and sound the training that turns ordinary citizens into soldiers.
[text_ad]

Downstairs in the Grand Hall are the four galleries that feature diverse experiences such as walking through a replicated World War I trench and a Vietnam jungle.

“A World Power 1920-1947” is a particularly popular gallery. It includes sections on Europe and the Pacific. Several dioramas depict significant battles while the stories of those conflicts are relayed through individual soldiers’ possessions.

Among the many artifacts from the European Theater are one of Mussolini’s shoulder boards, an M1 helmet developed at Fort Benning, and a flag from D-Day. In the Pacific area are a Japanese cold-weather uniform, a jeep, a flamethrower used against the enemy, a parachute used during the re-taking of Corregidor. 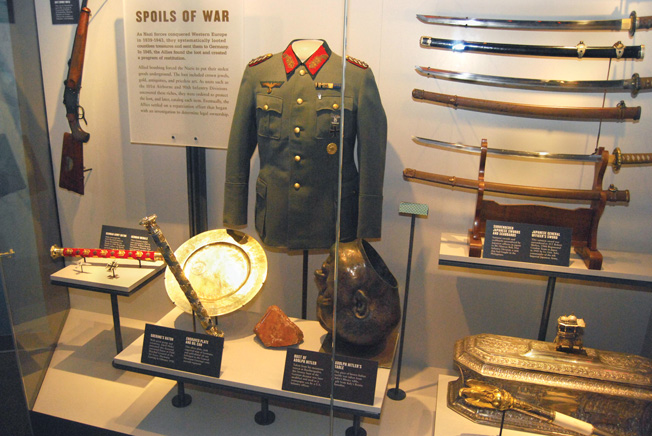 Soldiers are inveterate souvenir collectors and so another popular exhibit is the war trophy display, which includes Hermann Göring’s gold-and-diamond field marshal’s baton and the swords of Japanese emperors.

A Walk Around the Museum

The museum grounds include a stately walkway leading from the museum to the parade field. The five-acre field, used in graduation ceremonies, features soil taken from every major battle the nation has fought.

A visit to the World War II Company Street, opposite the parade field, is put into context by the docents. All the guides are veterans who bring their own experiences to tours of the seven-building complex.

The barracks, mess hall, orderly room, supply room, chapel, and General George Patton’s headquarters building and sleeping quarters are the only fully preserved set of “Series 700” buildings in existence. The structures are fully furnished with realistic touches like period music, photos, and furniture. A Sherman tank and period Physical Training (PT) field add to the realism.

The Walk of Honor, which winds around the property, pays tribute to various infantry units through the monuments being placed along the walk. 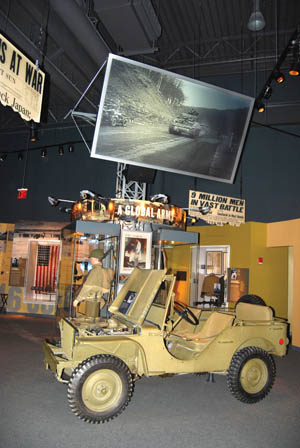 The world-class museum’s significance is documented on a plaque at the entrance that quotes General Powell: “Among many other things, this is what we owe those who went before. This is the place. This is the home. This is their legacy.”

Admission is free. However, the museum is privately funded and made possible through donations. There is a small charge for theater and simulator attractions. Hours: 9:00 am-5:00 pm Tuesday through Saturday; 11:00 am-5:00 pm Sunday. Open on all federal holidays that fall on Mondays (Martin Luther King, Jr. Day, Memorial Day, Independence Day, etc.). Closed Thanksgiving Day, Christmas Day, and New Year’s Day.