“If war was made more terrible, it would have a tendency to keep peace among the nations of the earth.” - Richard Gatling, Inventor of the Gatling Gun

Richard Gatling was born in Hertford County, NC, on December 12, 1818. His father was a prosperous farmer and inventor, and the son was destined to inherit the “invention bug.”

After three of his sisters died at a young age from disease, Richard Gatling decided to study medicine, and graduated from the Ohio Medical College in Cincinnati in 1850. He moved to Indianapolis the same year, and in 1854 married the daughter of a prominent local physician. There is no evidence that Richard Gatling ever practiced medicine after leaving medical school, but he was always referred to as “doctor.”

Gatling was a born inventor. Between 1857 and 1860 he patented a steam plow, a rotary plow, a seed planter, a lath-making machine, a hemp rake, and a rubber washer for tightening gears. One day in 1861, with the Civil War only a few months old, Dr. Gatling’s inventive fervor suffered a shock that would turn his mind from machines of peace to machines of war. From his Indianapolis office window, Gatling watched in horror as wounded and maimed soldiers were unloaded from a train—casualties from the southern killing fields.

The doctor was aware that the conflict was being waged in Napoleonic fashion. Men faced each other in solid ranks—aimed, fired, reloaded—and, on command, charged headlong into the blazing guns of the enemy. For several nights Richard Gatling could not sleep. A single idea occupied his thoughts. What if a few soldiers could duplicate the firepower of a hundred men? Troops would no longer be able to stand still and shoot at each other. And the running charge would be impossible, because the attacking force would be mowed down like tall grass.

Gatling reasoned that if he were able to invent a machine that could plant seeds swiftly, accurately, and in precise rows, he should be able to devise a mechanical gun that would spray bullets like water from a garden hose.

Invention of the Gatling Gun

Within a few weeks, the doctor had completed the drawings for his innovative weapon, the “Gatling gun,” and took the sketches to a machinist to manufacture.

The first Gatling gun consisted of a cluster of six rifle barrels, without stocks, arranged around a center rod. Each barrel had its own bolt, and the entire cluster could be made to revolve by turning a crank. The bolts were covered by a brass case at the breech. Cartridges were fed into a hopper, and as the cluster revolved, each barrel was fired at its lowest point, and then reloaded when the revolution was completed.

The gun was mounted upon a wheeled carriage. Two men were required to operate the weapon—one to sight the target and turn the crank, the other to load the ammunition.

A working model was completed within six months, and a public demonstration was held across Graveyard Pond in Indianapolis. The abrupt, rapid noise of gunfire could be heard for five miles and, at 200 rounds per minute, the bullets cut a 10-inch tree in half in less than 30 seconds.

Dr. Gatling patented his gun on November 4, 1862, but he had a difficult time selling it to the Army. General James Wolfe Ripley, chief of ordnance, was not impressed with the weapon and remarked: “You can kill a man just as dead with a cap-n’-ball smooth-bore.”

Gatling was unperturbed, however, and took his diagrams to a manufacturing company in Cincinnati. Twelve of the Gatling guns were built, and a few of them were sold to General Benjamin Butler for $1,000 each. Butler later used the Gatlings to hold a bridgehead against Confederate cavalry at the James River.

Richard Gatling continued to modify and improve the weapon, and in 1865 patented a model that was capable of firing 350 rounds per minute. A demonstration was held at Fortress Monroe. This time the ordnance department was impressed and ordered a hundred guns. The Gatling gun was officially adopted by the U.S. Army on August 24, 1866. It was first manufactured by Cooper Arms in Philadelphia, and later by the Colt Arms Company of Hartford, Conn.

Dr. Gatling traveled throughout Europe selling his weapon, and new models were continually being designed. A short-barrel variety was purchased by the British and mounted on camels. This so-called “camel gun” was also used by the U.S. Army and Navy.

As settlers moved west after the Civil War, Army garrisons in forts along the frontier housed Gatling guns. Gatlings were also attached to cavalry expeditions. A Gatling detachment under Lieutenant James W. Pope accompanied General Nelson A. Miles’s campaign into west Texas. On August 30, as an advance party of Army scouts entered a trail that led between two high bluffs, about three hundred Indians charged down the cliffs. At the sound of gunfire, Pope quickly brought up his Gatling guns. The rapid, withering fire scattered the attacking warriors, and they fled in confusion.

During the same year, a battalion of 8th Cavalry, commanded by Major William R. Price, was ordered out to suppress an uprising by several Indian tribes, including Arapaho, Cheyenne, Comanche, and Kiowa. Price was able to successfully fight off several surprise attacks by hostile bands with two Gatling guns. 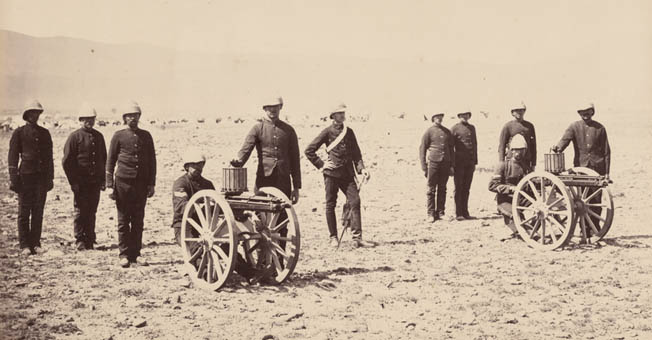 But in the most famous battle of the Indian Wars, the Gatling was strangely absent. On June 22, 1876, Maj. Gen. George Armstrong Custer and his 7th Cavalry rode out from their Powder River camp and headed for the Little Big Horn River. Custer had been offered three Gatling guns but refused them. He felt that the Gatlings—mounted on horse-drawn carriages—would slow his cavalry troop down in rough country. Custer also believed that the use of such a devastating weapon would cause him to “lose face” with the Indians. Whether or not the Gatlings could have saved Custer and his 200 men is questionable. Some accounts report the column of Indians that retreated after the battle as being three miles long and a half-mile wide.

During the next few years, the Gatling gun participated in a number of battles, including those with the Nez Perce. The warriors under Chief Joseph fought 13 engagements against the U.S. Army, many of which were standoffs. Finally, on September 30, 1877, in the Bear Paw Mountains of Montana, General Nelson Miles, with 600 men and a Gatling gun, attacked Chief Joseph’s camp. After four days of bitter fighting, Chief Joseph could hold out no longer. As he surrendered his rifle to Miles, the valiant Indian leader said, “My heart is sick and sad. From where the sun now stands, I will fight no more forever.”

The Gatling Gun In Africa

During the latter part of the 19th century, Gatling guns became more and more popular, and were used in the many wars that flared during the 1880s and 1890s. The 1879 war between England and the African Zulu tribes was the first major land action in which the Gatling gun proved to be a deciding factor. A small British army, commanded by Lord Chelmsford, defeated a much larger Zulu force under King Cetywayo. In one encounter, a single Gatling mowed down more than 400 tribesmen in only a few minutes.

After his victorious campaign, Lord Chelmsford wrote: “They [Gatling guns] should be considered essentially as infantry weapons. They can be used effectively, not only in defense, but also in covering the last stage of an infantry attack upon a position—where the soldiers must cease firing and charge with the bayonet.”

By the time Dr. Gatling died in 1903, the automatic machine gun had arrived on the scene. It was powered by the discharging gases of its fired cartridges, and was simpler and more economical to use than the manually operated guns. In 1911, the U.S. Army declared the Gatling gun obsolete.

But Richard Gatling’s legacy did not die with him. In September 1956, the General Electric Company unveiled its 6-barrel aerial cannon called the Vulcan. For several years, General Electric had made a detailed study of every rapid-fire gun, and its engineers had found that Dr. Gatling’s original patents offered the most promise for the development of firepower necessary for fast jet fighter aircraft. The Vulcan was also put to use on attack helicopters and gunships.

One thought on “The Gatling Gun: A Civil War Innovation”