The Duke of Wellington in Assaye in India

When asked by his friend to recall the best thing he had ever done as a soldier, the Duke of Wellington simply said: 'Assaye.'

Years after he had saved the world from the ambitions of Napoleon Bonaparte, Arthur Wellesley, Duke of Wellington, was asked by his friend, George William Chad, to recall the “best thing” he had ever done as a soldier. Perhaps Chad expected him to name one of his victories gained in the hard-fought Peninsula War: Talavera, Salamanca, Badajoz, or the capture of Cuidad Rodrigo. Perhaps he anticipated the Duke’s reply to include the name of a small town in Belgium where throughout a long day of savage fighting the fate of Europe hung in the balance, the Old Guard died, and Napoleon fled his last battlefield. But, perhaps Chad was somewhat surprised at the Duke’s laconic response: “Assaye.”
[text_ad]

Arthur Wesley, then 28 years old and colonel of the 33rd Foot, landed in Calcutta on February 17, 1797. He had not yet reassumed the original spelling of the family name, which had been shortened sometime after the end of the 12th century when a Wellesley had ventured to Ireland as standard bearer to Henry II. Ten years before his arrival in India his older brother, Richard, Lord Mornington, had purchased a commission for him as ensign in the 73rd Highland Regiment. The purchase system probably produced more bad officers than good, but as the Duke would later note with approval, “it kept the command of the army in the hands of men of estate and family … [which] ensured loyalty to the established order of society.”

The future duke spent the next 12 months engaged in an endless round of symposia interrupted by an aborted mission to attack the Dutch in Java. Things began to get interesting when Lord Mornington arrived in India as Governor General in May 1798 along with Arthur’s younger brother, Henry, as his secretary. They were both calling themselves “Wellesley” and Arthur soon followed his brothers’ example.

By all accounts Lord Mornington’s designs were imperialistic and contrary to the general attitude of the British East India Company, which had, since its inception in 1600, been more interested in the acquisition of trade goods than of territory in India. However, in order to protect its interests, the Company was gradually compelled to become embroiled in the quagmire of Indian politics, and eventually ended up a political entity itself, ruling the three presidencies of Bengal, Madras, and Bombay. The governors of each presidency were, at first, equal in authority, but by virtue of the Regulating Act in 1773, Parliament turned the governor of Bengal into the Governor General of India. Ten years later, the India Act of 1784 stipulated that the Governor General was to be nominated and paid by the Company, but appointed by the Crown and answerable to a board of Control composed of government ministers. 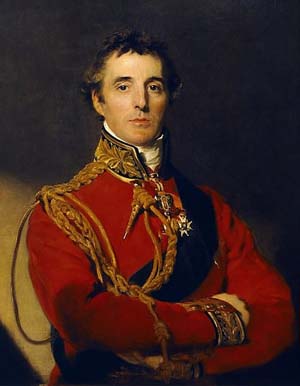 “The Tiger of Mysore”

Thus, while Mornington was an employee of the East India Company, he was also an appointee of the British Government. With that in mind he immediately took measures which would not only further his own ambitions, but also protect the interests of his mother country. These, Mornington felt, were threatened by Napoleon’s arrival in Egypt and correspondence with Tippoo Sultan, ruler of Mysore. Indeed, one of Napoleon’s goals for the Egyptian venture was to weaken Britain in India.

Six years before, Tippoo, also known as “The Tiger of Mysore,” had been deprived of half his dominions by the British East India Company’s former Governor General, Lord Cornwallis. Tippoo was not well disposed toward the English. He was, in fact, an ardent admirer of the French Revolution, calling himself “Citizen Tippoo,” and maintaining an army trained and led by Frenchmen. He was reputed to be engaged in negotiations with Napoleon and was expecting a shipload of French reinforcements from their island colony, Mauritius, in the Arabian Sea. Mornington, receiving this intelligence in June, was all for an immediate attack on Mysore. Arthur advised against it; the French reinforcements in reality amounted to less than 200 men, and it would take some time to mobilize the East India Company’s army. The Governor General took his brother’s advice and turned his attention northward to the Nizam of Hyderabad.

The Nizam’s armies were also led by Frenchmen. Here the commander was a man named Piron. Although Piron’s employer, the Nizam, was an autocratic monarch, Piron was a fanatical supporter of the Revolution and preached liberté, egalité, fraternité. In addition, he was in close contact with the Nizam’s rival to the south, Tippoo.

To the north and west of the Nizam was the Mahratta Confederacy whose light cavalry had decimated the heavy squadrons of the Mogul Empire some 90 years before. In 1798, they held the ancient capital Delhi and paraded the captive Mogul Emperor, Shah Alam II, as a symbol of their legitimacy.

The Nizam trusted neither Tippoo to his south, nor the Mahrattas to his north, nor his own French officers. Indeed, he had negotiated with the former Governor General, Sir John Shore, with the object of replacing his French officers with British, and willingly re-opened negotiations with Lord Mornington to that effect. Mornington wanted Piron and the French gone altogether, but Mornington also had to be concerned that the Revolution-loving Piron would enter the service of Tippoo, who, as an implacable enemy of England, was merely awaiting his chance for terrible revenge.

Setting Sights on Tippoo in Mysore

On September 1, 1798, the Nizam signed a treaty agreeing to dismiss his French officers and become a protectorate of the English and their East India Company. In return he would receive a large sum of money and some of Tippoo’s territory. With this success in hand, Lord Mornington sent the 33rd and Arthur Wellesley south to Madras to begin preparations against Tippoo in Mysore. The French officers in the Nizam’s service weren’t about to just up and leave town. But by October the Nizam, in collusion with the British, had, by rumor and bribery, turned his troops against their French officers. The French were saved only by the timely arrival of six battalions of British redcoats.

For the next four months Lord Mornington negotiated with Tippoo regarding dismissal of his French officers and reception of a British ambassador. Tippoo procrastinated and prevaricated, hoping for reinforcements from Napoleon. Finally, in December, the Governor General ordered a force assembled at Vellore, about 100 miles west of Madras and less than 200 miles east of Tippoo’s capital, Seringapatam.

Whipping the Army Into Fighting Shape

Arthur Wellesley was in temporary command, awaiting the arrival of General George Harris. Arthur had served under the Duke of York in Flanders in 1794 and there, as a result of the inattention and incompetence of his fellow officers, had learned “what one ought not to do.” Four years later, in camp at Vellore, he left nothing to his subordinates, writing dispatch after dispatch regarding supplies while at the same time whipping the army into fighting shape.

In December, Wellesley was given command of the Nizam’s contingent upon the death of Colonel Henry Harvey Aston who was killed in a duel with a fellow officer. By February 3—negotiations having achieved nothing—the army was on the move with General Harris in command. Accompanying the 36,000 combat troops was what Wellesley called a “monstrous equipment”—200,000 camp followers of every description and probably at least as many, if not more, baggage animals. As they marched toward Seringapatam from the east, the Bombay Army, under the command of General James Stuart, was approaching from the west. Marching 10 miles a day, in a hollow square seven miles long and three wide, the Madras force crossed the border into Mysore on March 5. The next day, General Stuart defeated Tippoo near Periapatam some miles to the west of Seringapatam.

Having failed to stop Stuart’s advance, Tippoo hurried eastward to attack Harris. On the 27th he met the combined forces of the East India Company and the Nizam at Malvilly. Tippoo personally led his cavalry against the British right, but was repulsed at bayonet point. His own infantry, advancing in column as was the French tactic, were shot to pieces by the British formed in line of battle.