Because of the severe conditions at Sugar Loaf and elsewhere on Okinawa, the fighting produced an alarmingly high number of battle fatigue cases. Constant vigilance against nighttime infiltrators, cold, rain, the unbelievable mud, and most importantly, the prolonged volume and accuracy of Japanese artillery taxed the Marines to such a point that some went beyond their endurance level. A special field hospital set up at the end of April to treat battle fatigue cases quickly became inundated with more than 3,000 patients.
[text_ad] 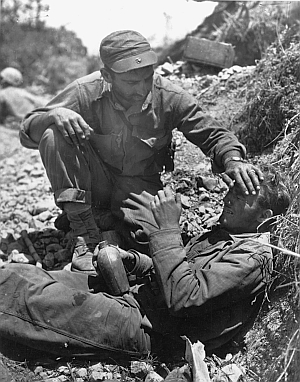 Private First Class Eugene Sledge watched one Marine, a veteran of the bitter fighting at Peleliu, dissolve under the strain of combat at Okinawa. The Marine lapsed into sullen silence for about an hour, then burst out yelling that he was going to charge a nearby Japanese machine-gun nest and kill every occupant. He rose to start his sprint, but Sledge and a sergeant, realizing the man was embarking on a suicidal attempt, tripped him up. After the Marine collapsed, he wet his pants and cried uncontrollably. The broken Marine still sobbed as a corpsman gently led him away.

“We had just seen a brave man crack up completely and lose all control of himself, even to the point of losing his desire to live,” wrote Sledge after the war.

Some men doubted the validity of battle fatigue, instead questioning the soldier’s manhood. Brig. Gen. Oliver P. Smith, Marine deputy chief of staff for the Tenth Army, at first dismissed most battle fatigue cases as “a good chance to get a five-day rest if your conscience was not too active.” He contended that Marines knew that once they were behind the lines they could enjoy rest, hot food, and hot baths.

In May, however, General Smith investigated a psychiatric hospital where physicians allowed him to observe their treatment to learn more about the issue. One man was brought in who had been recommended for a Silver Star for remaining at his machine gun during one particularly fierce enemy counterattack. After the action ended, Japanese bodies lay on all sides of his post. The man, still trembling even though resting in a hospital, felt such horrid guilt over killing so many humans that he snapped. Doctors told a moved General Smith that the man simply needed a respite from the battlefield and would most likely return to duty in a few days. 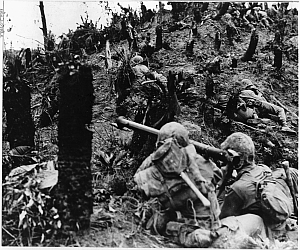 Another Marine had been evacuated to the hospital, babbling and trembling after a mortar shell exploded in his foxhole. When he finally stopped shaking after several days, doctors, convinced that something deeper than the mortar shell lay behind the man’s inability to function, attempted to expose the reason. After injecting a solution into his arm that, while leaving him conscious, removed his inhibitions about talking, a physician asked questions that gradually took the man back to the time of the shelling. As they spoke, the doctor suddenly stamped his feet, smacked the wall with his fists, and screamed, “Mortar! Mortar! Mortar!” The patient instantly began shouting, “Dig deeper! Dig deeper!” fell to his knees, and acted as if he were digging a hole in the corner of the room.

The doctor later estimated that this Marine faced a 50 percent chance of recovery. General Smith, once hardcore in his reaction to battle fatigue cases, departed with an increased compassion for such men.

One thought on “Survival at Sugarloaf: Battle Fatigue at Okinawa”