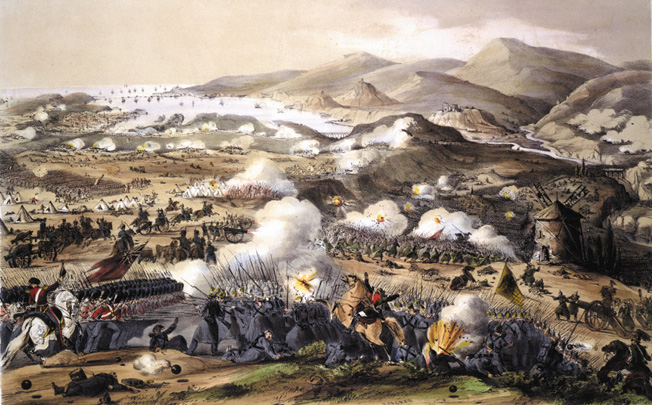 Leo Tolstoy & The Siege of Sevastopol

For young Russian Leo Tolstoy, the siege of Sevastopol was a major step toward literary immortality.

Of the thousands of Russian soldiers and civilians pinned down by Allied forces during the 11-month-long siege of Sevastopol, one in particular chafed at the monotonous, mind-numbing routine. Twenty-six-year-old Leo Tolstoy, a high-born young count who could trace his aristocratic roots back to the reign of Catherine the Great, had joined the czar’s army three years earlier mainly as a way of removing himself from the temptations of the royal court at Moscow and the ruinous addiction to gambling that was steadily reducing his family inheritance. His firsthand accounts of the siege and fall of Sevastopol, collected and published as Sevastopol Sketches, started Tolstoy on the road to literary fame, and ultimately, to artistic immortality.
[text_ad]

Tolstoy arrived in the Crimea in the fall of 1854, too late to take part in the great battles at Alma and Inkerman. Prior to that, he had served a brief apprenticeship with Cossack troops in the Caucasus before joining the personal staff of Prince Michael Gorchakov (a friend of his late father) in Bucharest, Romania. He had seen no actual combat, with the exception of one narrow brush with death at the hands of Chechen horsemen while serving on escort duty, and he glumly took stock of himself in his diary at the time: “What am I? One of the four sons of a retired lieutenant-colonel…without any great fortune or any solid position in society, and above all, without principles; a man who has mismanaged his affairs to the last degree, wasted the best years of his life in futile and joyless agitation and finally expatriated himself to the Caucasus to escape from his creditors, and even, more from his habits.” Disgusted with his cushy staff position, Tolstoy requested a transfer to the Crimean front, “partly,” as he explained it to his brother Sergey, “to see this war at first hand.”

He soon got his wish. As a newly promoted second lieutenant in the 5th Light Battery of the 12th Artillery Brigade, Tolstoy found the besieged city “one huge bivouac,” crowded with soldiers, sailors, camp followers, and refugees. Military funerals for fallen officers passed frequently through the crowded streets, while flat wagons loaded with the corpses of less-exalted soldiers wound their way to anonymous graves on the edge of town. Allied cannon fire was incessant, and the young lieutenant noted that “when the shell has gone past, you revive, and an inexpressible thrill of joy and relief surges through you.” A tour of the front-line defenses filled Tolstoy with a brief surge of patriotic fervor. “The heroism of the troops beggars description,” he wrote home. “When passing the troops in review, [Vice Admiral Vladimir] Kornilov said not, ‘Hello there, my lads!’ but ‘If it has to be death, my lads, are you willing to die?’ And the soldiers cried out, ‘We’ll die, Your Excellency! Hurrah!’ These are noble days!”

But Tolstoy’s admiration for the common soldiers soon gave way to disgust at the conduct of the war by his superiors. Between dodging enemy shells and continuing—despite his best intentions—to lose large sums of money at cards, Tolstoy roamed Sevastopol, storing up images of suffering, dismemberment and death that he conveyed to the reading public back home in a series of intense, vivid sketches. The new czar, Alexander II, ordered Tolstoy’s sketches translated into French, the official language of court, and freely distributed. For the first time, the Russian people could read about the awful reality of modern war. The czarina, it was said, wept at his prose. By the time Sevastopol fell in August 1855, Tolstoy was well on the way to literary fame. His fellow writer Ivan Turgenev spoke for many when he told the author: “You have shown sufficient proof of your bravery, but the military life is not for you. Your weapon is the pen, not the sword.” For the remainder of his long, incomparable career, Tolstoy used that weapon—forged in the fires of Sevastopol—to speak out for peace. Almost overnight, the aimless and dissolute young soldier had become a towering and humane artist.