It might seem strange to imagine collectible cards based on the events of World War II. The funny thing is, I’m sure they exist, encased in plastic in a few collectors’ binders across the world, each touting unique facts and feats performed by the historical figure on the front. World War II: TCG (Trading Card Game) doesn’t feature those kinds of cards, but it does have a bunch of customizable decks full of infantries, vehicles, modifiers, and other ways of taking on opponents in both player-vs.-computer and player-vs.-player modes.
[text_ad]

For the most part, its simplified take on card-battling games works, blending nicely with an easy-to-understand interface and straightforward rules. The opening tutorial guides you through a few short skirmishes, holding your hand gently as it teaches you the ropes of how to play cards in each turn, how to use other cards to power up and modify those in play, and how to use acquired points to promote cards, strengthening both their attack and defense and keeping them in the fight longer. The ultimate goal is to use your cards to whittle away at your opponent’s hit points while protecting your own, with the first to reach zero getting the bitter taste of defeat.

Hit-Or-Miss Presentation, But A Fun New Take on WWII Combat

For someone like myself who’s not terribly good at, or even much interested in, trading card games, World War II: TCG ended up being surprisingly likable. The presentation is hit or miss—sound, for instance, plays a small part in the dynamics but can be turned off with no real loss to the experience—but mostly gets the job done smoothly enough. Cards can be examined to get a better idea of which one would be appropriate for a particular play, but the simpler battles can typically be won by being aggressive and coming out strong with cards that will, ideally, overpower the ones your enemy puts on the field. 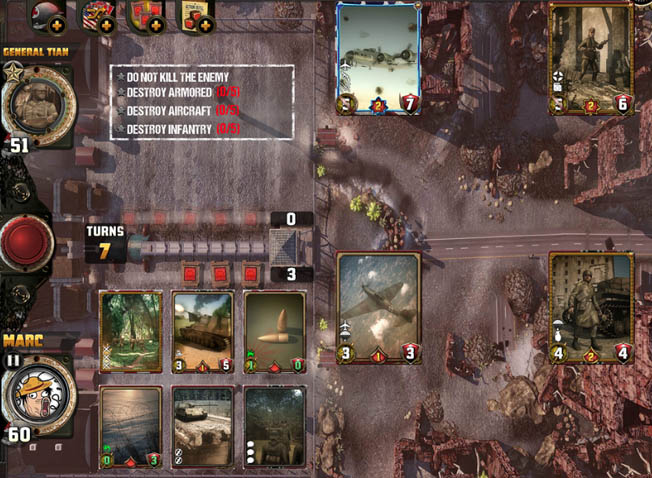 World War II: TCG features five factions—Germans, Americans, Russians, Japanese, and British—with more to be added in the future. User-created decks aren’t restricted by factions, though, so you can go wild and concentrate on putting the best cards in your deck regardless of their allegiance. While it’s nice that there aren’t too many restrictions on deck-building, there are special features that make cards of the same faction work well in tandem, so it’s worth keeping that in mind when putting your cards together. On the other hand, if building a deck sounds like a total drag to you, you can always go in with a prebuilt deck, which should at least get you through the single-player stuff without too much trouble.

Player versus Player is another story entirely. World War II: TCG is relatively young, so you can find some competition that’s still dabbling or just getting started, much like yourself. This will likely change as regular players get more time in with the game, so the versus play will definitely only get tougher from here on out. It does help that it’s cross-platform, though, as you’re more likely to find casual opponents giving it a go from a service like Facebook.

Like many free-to-play games, you’ll only get as much out of World War II: TCG as you’re willing to put in, be that time or money. I’m not really one for giving into the constantl -appearing advertisements that beg the player to plunk down a few real-world dollars for in-game rewards, but it makes enough sense for a game like this that it isn’t too egregious. Unfortunately, this also means I didn’t get to test out a few of the game’s features, namely the micro-transaction system in question. You can still earn unlockable items through normal play, though, it’s just going to take a lot longer than it would if you decided to pay upfront for the goods.

At the moment, World War II: TCG has more than 220 unique cards, with plans to release new booster packs with 5 to 10 new cards each month. If you enjoy trading card games but aren’t too hardcore about them, you’ll find World War II: TCG to be a nice little diversion for a while. It’s a bit simple for anyone who dips into the deeper end of the genre, though. Ultimately, a game like this is going to live or die based on the ongoing support from developer FrozenShard. If they keep the updates coming and it maintains a strong enough player base to fuel solid PvP competition, it could blossom into something greater in the coming months.