Charlemagne: Warlord of the Franks

With warrior skills learned at his father’s side, Charles the Great—Charlemagne—carved out a mighty empire in the strife-torn countryside of western Europe.

On Christmas morning, 800 ad, a tall, powerfully built man walked up the steps of Saint Peter’s basilica in Rome. Highly pious but by no means meek, Charles, ruler of the Frankish empire, had come—so he thought—simply to attend mass. In his mid-fifties, Charles retained the characteristic vigor for which he was known, his muscles hardened by years of warfare and his two favorite pastimes, hunting and swimming. He usually preferred the blue cloak and cross-gartered leggings of his own people, but today he had obliged Pope Leo III, who had personally asked him to wear a long tunic, Greek mantle, and shoes of Roman fashion. In his classical garb, Charles stood out among the locals like a visiting deity, which in a sense he was. His fair skin, golden hair, piercing blue eyes, and great height marked him as a man of the cold, gloomy northern realms.
[text_ad]

If Charles had had any inkling of the elaborate ceremony about to take place, he likely would have avoided the entire affair. He was a no-nonsense sort of individual, a man more accustomed to giving orders than to taking them. But as a scrupulously practicing Catholic, he felt it his duty to obey a summons from the pope, even one who had a good deal more reason to obey Charles than the Frankish king had to obey him. In a spirit of faithful cooperation, Charles had agreed to attend mass wearing the fulsome costume of a classical hero.

“The Most Pious Augustus”

Once inside the church, Charles was surprised and somewhat taken aback by the emotional greeting accorded him by the pope. Leo, having barely escaped imprisonment and mutilation by his political enemies on spurious charges of perjury and adultery, owed his recent reinstatement to Charles, who had publicly shown his support of the pope and demanded that he be restored to his seat as bishop of Rome. Now the grateful Leo returned the favor by placing a golden crown on the king’s startled head while the entire congregation cried out a blessing: “To Charles, the most pious Augustus, crowned by God, mighty and pacific emperor, life and victory!” After 324 years, there was once again an emperor in the West—not that Charles, better known to history as Charlemagne, needed a papal decree to make him emperor. He had already been one in fact, if not in name, for many years. 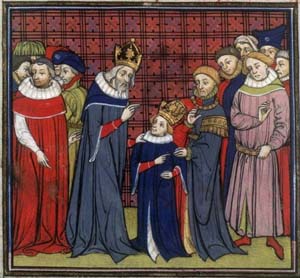 Through Charles’ great heart pumped the blood of the Franks, one of the major Germanic tribal groups. Centuries earlier the Franks poured into Roman Gaul from their homelands on the lower Rhine. The Western Roman Empire was in its death throws and the great migrations were in full swing. Axe wielding Frank infantry, mailed Goth cavalry and fearsome Hun archers, among a colorful array of tribes, carved up the carcass of the Western Empire. The final act came in 476 AD, when a barbarian general disposed the last of the West Roman Emperors. Through sheer force and deceit, King Clovis (c.465-511) consolidated the Franks’ hold on Northern Gaul and spread their suzerainty over much of Europe. Born a pagan, Clovis’ shrewd mind saw the Catholic Orthodox Church as a potential ally and unifying force. Clovis allowed himself to be baptized, along with thousands of his troops.

Hedonistic excesses inevitably sapped the vigor of Clovis’s dynasty, the long-haired Merovingians. Their power gradually gravitated into the hands of their leading officials, the Arnulfing, or as they later became known, the Carolingians. The most famous of these usurpers was Charles Martel—the Hammer—who in 732 repulsed a Moorish invasion of Europe at the Battle of Tours and henceforth was immortalized as a savior of Christendom. Martel’s grandson, eight-year-old Charles, must have looked up to his grandfather with awe. Born out of wedlock, Charles was the oldest of three children born to Pepin III, known by the unflattering nickname Pepin the Short. While his father was disposing of the last of the Merovingian kings in 751, Charles was learning from grizzled veterans how to use the weapons of war—the spear, the round shield with its heavy iron boss, the single-edged short sword, and the most powerful weapon of all, the double-edged long sword. It was a skill that would stand him in good stead in years to come.

The western Europe of Charles’s youth was fragmented by tribal rivalries, the growing power of the Catholic Church, the encroachment of Islam, and the waning influence of the Byzantine Empire. All these factions jockeyed for advantage and territory. When a tear-stained Pope Stephen II threw himself at Pepin’s feet in 754 and begged for his aid against the “most evil Lombards,” he was hoping that Pepin would help the Church retain its tenuous hold on Rome and the rest of Italy. At the time, the most prominent power in Italy was Lombard King Aistulf, who had just swallowed up the last Byzantine lands around Ravenna and was threatening to do the same to Rome, swearing that “the Romans would all be butchered unless they submit themselves to his dominions.” 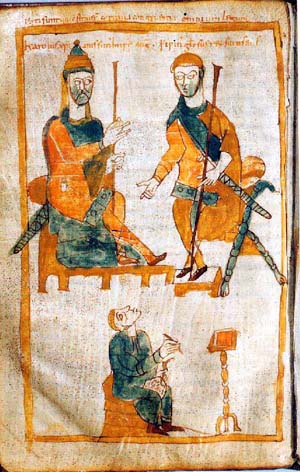 Fortunately for the Church, Pepin decided to honor the Franks’ ancient alliance, which went back to the days of Clovis. Pepin not only wrested the Byzantine lands away from the Lombards but, instead of handing them back to their rightful owner, the Byzantine emperor, he gave them to the Church instead. In gratitude, the pope anointed Pepin and his sons, Charles and his younger brother Carloman, as his rightful heirs. Besides the Lombards, Pepin also fought Saxon and Moorish raiders. More often than not, Charles was at his father’s side. After a lengthy campaign, the kingdom of Septimania on the Spanish border was conquered and subdued in 759, after which time its renowned Goth cavalry became a loyal ally. The rebel kingdom of Aquitaine, however, gave Pepin more trouble. During the eight-year-long Aquitaine War, Pepin’s Bavarian vassal, Duke Tassilo, refused to send any help, thus beginning a long feud between him and the Carolingians. Pepin, preoccupied by the fighting in Aquitaine, was unable to resolve the feud and bring Tassilo back into line.