Cauldron of Death: the Demyansk Salient and the Eastern Front

The Demyansk salient proved a horrific Eastern Front battleground, due in part to the meddling of two dictators.

On the vast Eastern Front, the Demyansk salient represented little more than a smudge on the battle map. For the Russians, however, the salient was a festering boil that would not go away. Members of the Stavka (Soviet high command) referred to it as a dagger pointed at the heart of the Motherland—Moscow. The Germans defending the salient simply called it “der Kessel”—the Cauldron.
[text_ad]

Costly Decisions on Both Sides

A combination of rigidity in command and lack of coordination of the Russian forces, coupled with Hitler’s “no retreat” order and stubborn German resistance, foiled the Soviet dictator’s grandiose plan. Both the Germans and the Russians paid dearly for their leaders’ decisions.

One of the most hotly contested areas on the northern sector was the region containing the Valdai Hills and the town of Demyansk. A vital rail link that connected Moscow and Leningrad was located in the town, and both sides fought bitterly for control of the area. 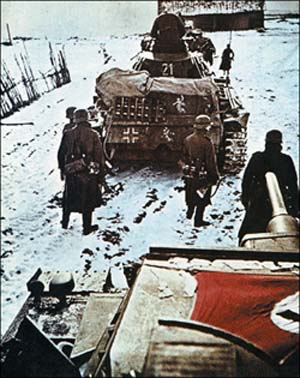 Braving the Elements Along With the Front Lines

General Walter Graf von Brockdorff-Ahlenfeldt commanded the II Army Corps, which was charged with defending the Demyansk sector. The 54-year-old count already had a distinguished military career, which began in 1907. During the 1940 French Campaign, von Brockdorff was awarded the coveted Knight’s Cross while leading the XXVIII and II Army Corps.

When the Soviet offensive began in January 1942, von Brockdorff had three divisions under his command. The 12th Infantry Division, temporarily commanded by Colonel Karl Hernekamp, was raised from Mecklenberg troops. General Wilhelm Bohnstedt’s 32nd Infantry Division consisted of men from Pomerania and Prussia, while General Erwin Rauch’s 123rd Infantry Division came from Brandenburg. The men of these divisions had experienced the heady days of the blitzkrieg advance in Russia. Now, they were facing a vastly superior enemy while freezing in their threadbare summer uniforms.

Holding Demyansk at All Costs

As von Brockdorff’s men fell back under the onslaught of Maj. Gen. P.A. Kurochkin’s Northwest Front, orders came from Berlin that Demyansk must be held at all costs. Control of the area was vital, and as long as the rail link was in German hands, rail supply on a large scale between Moscow and Leningrad would be impossible.

On January 9, Kurochkin’s 3rd and 4th Shock Armies smashed into two regiments of the 123rd. Strongpoints were wiped out, and Red Army troops poured through huge gaps in the German line. By January 12, von Brockdorff had received orders to pull back toward Demyansk. On his left flank, General Christian Hansen’s X Army Corps was also falling back under the fury of the Soviet assault. At the time, Hansen’s command consisted of the Schleswig-Holstein 30th Infantry Division (General Kurt von Tippleskirch), the Schleswig-Holstein and Hanoverian 290th Infantry Division (General Theodor Freiherr von Wrede), and General Theodor Eicke’s SS “Totenkopf” (Death’s Head) Division.

“Your Calculations Are of No Consequence”

Although the Russians pressed the Germans hard, they could not exploit their initial successes in the northern sector. Cut off German units formed strongpoints in villages that were bypassed by Red Army assault troops, and follow-up units had to constantly siphon off forces to try and overcome them. Some of the strongpoints fell, while others held out for weeks.

The situation was fluid and confused, not only for the front-line troops but for the higher commands in the rear area as well. When one German division urgently requested a resupply of ammunition, its corps headquarters radioed back that calculations showed that the division was using too much ordnance. “Your calculations are of no consequence,” came the laconic reply from the division headquarters.

Maintaining Pressure on the German Line

With the attack still in full swing, Kurochkin ordered his 11th and 34th Armies to keep pressure on the German line in front of Demyansk while he sent other units around the enemy flank in a pincer movement. Hitler had demanded that Demyansk be held at all cost, so von Brockdorff and Hansen were denied the freedom of action necessary to prevent the Russian flanking maneuver.

Instead, the German corps and divisional commanders were forced to deploy their troops in an area that was being gradually compressed until it resembled a finger poking out from the main German line of resistance. Throughout January, the German divisions around Demyansk maintained a tenuous contact with the main line. By the end of the month, Stalin had become furious with the German resistance and ordered the completion of the encirclement—no matter what the cost.

To accomplish the mission, the 1st and 2nd Guards Rifle Corps (Brig. Gens. A.S. Gryaznov and A. I. Lizyukov) were sent to the sector. Since the Germans were ordered to stand fast, it was only a matter of time before the pocket was cut off. On February 9, contact with overland supply lines was severed by the Soviets and the Demyansk Cauldron was born.

Inside the Cauldron were the remnants of several German divisions from the II and X Army Corps and from neighboring Army corps that had been caught up in the Soviet net. Hansen had moved his headquarters to Staraya Russa, some 20 miles northwest of the Cauldron’s western perimeter. Von Brockdorff’s headquarters remained in Demyansk and was given overall command of the encircled German forces. He had approximately 95,000 men to hold the Russians at bay.

From the beginning, supply was a critical problem for the trapped forces at Demyansk. Von Brockdorff estimated that he would need about 200 tons of ammunition, food, and other essentials to allow the men inside the Cauldron to survive. An air supply effort was initiated on February 12, but the trusty “Tante Ju” aircraft (“Aunt Ju”—slang used by German troops for the Junkers Ju-52 transport airplane) only managed to drop less than half that tonnage.