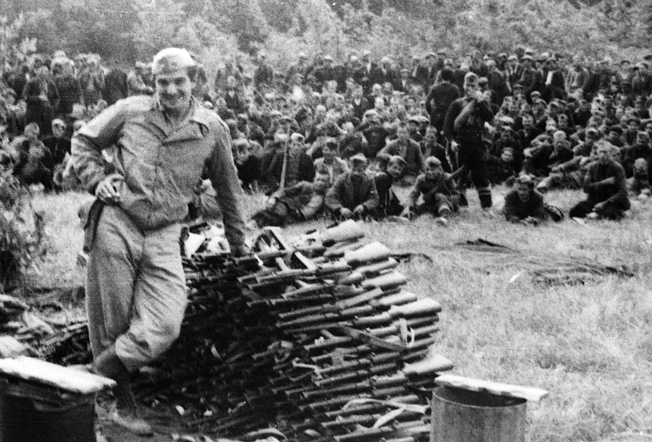 Bringing Down the Bridges

In April 1941, German troops swarmed into Greece from Bulgaria. Despite a valiant defense by the Greek Army and support from the British, the Nazis smashed their battle lines and controlled Greece within weeks. The British evacuated by sea, and the dark shadow of the swastika fell over another Balkan country.

In August 1943, two OSS (Office of Strategic Services, forerunner of the modern U.S. Central Intelligence Agency) agents landed in Greece from a submarine. They were followed by 300 OSS operatives over the next year. These were inserted by sea, air, and land. The OSS agents led Greek guerrillas in ambushes against German troops, destroyed installations, and provided tactical intelligence on the enemy’s order of battle. Undercover OSS operatives established spy networks and carried out espionage missions in Greek towns and cities where they obtained economic, political, and military strategic intelligence for secret radio reports. The agents were recruited from Greek refugees in Cairo and from Greek-Americans in the United States.
[text_ad]

In the spring of 1944, a major OSS Special Operations sabotage mission was authorized by the Joint Chiefs of Staff. Designated the Evros Mission, it began on March 29, 1944, with the infiltration of an OSS team into Greece from neutral Turkey.

Rendezvousing with the Resistance

Throughout World War II, trains roared across the Turkish border carrying chrome along the Istanbul-Sofia-Salonika railroad line through Greece, Bulgaria, and the Balkans to weapons factories in Germany. Allied diplomatic negotiations could not stop the shipments of the strategic metal, which was used to strengthen tank armor and gun barrels, to the Axis. The only solution was to destroy the railway bridges from Turkey into neighboring Bulgaria and Greece. The mission was given to OSS Special Operations Branch.

Captain Kellis reported that the team entered Greece via the Evros River. “We marched for approximately five hours until we arrived at the mountain headquarters of the ELAS Andarte (Greek guerrillas). There we met the military and political leaders of the Evros district. The next day we began our negotiations to enlist their cooperation for the severance of communications between Turkey and Europe.

“The Evros leaders were not the easiest lot to deal with. The British had in the past dispatched two missions to that vicinity and both had failed. Their [the Greeks] coolness turned into a wholehearted cooperation after they ascertained our sincerity and realized that we were purely a military mission whose only purpose was the destruction of the enemy. We closed an agreement in which we promised to supply them weapons and they in return guaranteed that they [the weapons] would be used against the enemy. They also agreed to cooperate with us in the destruction of any objectives we deemed necessary to destroy.”

“We Met an Unorganized Mob”

The region was in chaos. Civil war had erupted in Greece between the Communists and Royalist Nationalist factions. The OSS team had to establish cohesiveness among the Greek guerrillas and persuade them to put aside political differences, at least temporarily, to effectively fight the Nazis.

“What we found was anything but an Andarte unit,” recalled Kellis. “The political tenseness reached such a degree that a virtual civil war was in process during which 800 Greeks were killed. Their weapons were of the 19th century vintage and the lack of ammunition was surprising. There were hardly any Greek officers with them, and in short, we met an unorganized mob. We immediately took steps to prevent any bloodshed among Greeks and until our day of departure only a few Greeks were killed and they were traitors or had cooperated with the enemy. The organization of nearly 1,000 Andartes would require the support of many officers. We immediately enlisted services of 10 former officers of the Greek Army. Our experiment proved successful. The attitude of the Andartes changed very fast and the population started to cooperate with us and stiffened their attitude toward the enemy.

“The enemy immediately noticed those changes and lost no time to make it as uncomfortable for us as possible. They started making arrests in order to terrorize the Greek populace and thus prevent them from supplying us with food. These measures only strengthened the morale of the population.”

The Germans deployed a special reconnaissance battalion into the region to eliminate guerrilla resistance; however, the OSS-led Greeks were able to meet the enemy threat. In one engagement, Captain Kellis and a 13-man force were surrounded by the German battalion and fought the numerically superior unit for seven hours before escaping with three slightly wounded Andartes.

On May 3, a U.S. transport plane from Bari, Italy, made an airdrop of explosives, weapons, and ammunition. However, the parachute drop was not sufficient to execute the sabotage mission. Additional supplies and the remainder of the OSS team arrived on the night of May 11. Lieutenant Johnny Athens, Marine Corps Gunnery Sergeant Thomas Curtis, and Navy Specialist Third Class George Psoinos sailed a small fishing boat known as a caïque through the enemy-controlled Aegean Sea to the mouth of the Evros River. Captain Kellis and a group of Andartes waited anxiously on the swampy shoreline in an area saturated with German patrols.

Around midnight, Captain Kellis spotted the flash of a signal light glancing off the dark water. He flashed the countersign, and within a few minutes rendezvous with the caïque was made. The small vessel carried more explosives, rifles, and machine guns to arm the Greek guerrillas for the attacks on the bridges. Caïques were used extensively by OSS Special Operations and maritime units for missions in the Mediterranean and Aegean seas.

The Evros Team reflected the interservice diversity of the OSS. The team leader was an Army Air Corps officer, second in command was a Navy officer, and three of the enlisted members were also Navy personnel. U.S. Marine Gunnery Sergeant Thomas Curtis was the only member from a ground combat service. The 29-year-old Marine veteran brought 11 years of military experience to the mission. He had served three years in prewar Hawaii before being assigned as an OSS instructor in map reading and fieldcraft at training sites in Maryland and Virginia. He was transferred to the OSS station in Cairo and served on a number of missions with maritime and special operations units before his assignment to the Evros team.

A crash course on weapon and demolitions use was conducted on May 18-19 in final preparation for the raid. The targets were a bridge near Svilengrad, Bulgaria, and a second one near Alexandropoulis, Greece. Captain Kellis, Lieutenant Athens, and a force of 170 Andartes would assault the Bulgarian site. Gunnery Sergeant Curtis and agent Angelos would lead a force of 50 guerrillas to destroy the Alexandropoulis bridge.

“The detail for the Svilengrad bridge departed on 23 May,” remembered Captain Kellis. “For the first two days we traveled through mountains and relatively safe country, but later we crossed into the Evros valley and had to take several security measures. We walked only at night and always followed a zigzag course so as not to give away our direction of march. Our guides were excellent, even though we passed near German and Bulgarian posts they never noticed us. During this march only three persons knew the destination and purpose of the mission. The sabotage team which was the advance element did not know that the main body carried explosives. The main body knew nothing of the sabotage crew.”

Captain Kellis’s OSS force arrived in the designated area on May 27. After two days of reconnaissance, they finalized the tactical plan and briefed the Greeks. Captain Kellis reported, “Our plan was: 1. Place sufficient guards to eliminate any interference from a thirty-one man German and Bulgarian guard post, 2. Prevent reinforcements from reaching them, 3. Cut all telephone communications, 4. Carry out the demolitions.”

At 10:50 pm on May 29, Captain Kellis and Lieutenant Athens placed the explosives on the cement legs and steel structure of the bridge. Their activity over the next several hours went undetected by the enemy guards. As the job was completed just after midnight on May 30, a German sentry fired a flare and illuminated their movement. Machine gun and automatic weapons fire swept the area. The two OSS agents swiftly ignited a five-minute fuse and raced for cover as rounds smacked into the bridge. Moments later, a spectacular explosion erupted and completely destroyed the huge structure.

Some Help from the Bridge Guards

Captain Kellis immediately gathered his guerrillas and struck out on a forced march to distance themselves from the Germans as far as possible before daylight. At about 4 am, German soldiers spotted the Evros team during a river crossing. By that evening a full enemy battalion was in hot pursuit. Captain Kellis and Lieutenant Athens broke off from the main body to rendezvous with Gunnery Sergeant Curtis and the southern raiding force. A Greek officer assumed command of the guerrillas and led the Germans in the opposite direction. After three days of maneuvering, the Greeks executed a well-planned ambush and killed the German commander and all of his staff.

Meanwhile, Sergeant Curtis had left the guerrilla base camp on May 27 and arrived at his objective two days later. The destruction of the southern bridge was also planned for the night of May 30. OSS agent Angelos approached the bridge in the darkness and was confronted by a Greek sentry. Angelos aimed his submachine gun at the astonished guard and told him that he was an American and was there to destroy the bridge. Surprisingly, the sentry volunteered to help but reported there were 30 other guards at a post nearby. Angelos raced back to Sergeant Curtis and reported the development. Curtis ordered a group of his Andartes to take the guard detachment prisoner. Ironically, 25 of the 30 guards also volunteered to join Curtis and his Andarte raiders. The remaining sentries were placed under guard.

Curtis was aware that his force had been spotted by the Germans, and he expected an attack at any moment. He raced to place explosives on the 100-foot steel structure that stood 45 feet high. At 11:30 pm, explosions echoed through the forested hills as the second strategic bridge was completely destroyed. Curtis and his men gazed with pride as debris poured down into the ravine. Muffled cheers and gestures of victory rippled through the Andartes as they watched the destruction of the enemy’s valued railway. The men swiftly assembled and withdrew from the target area.

A Victory for Morale

The Evros mission not only destroyed major enemy rail links with Turkey but also energized the Greek guerrilla forces in the region. The successful OSS sabotage raid increased the morale of the Andartes and the civilian population. Recruits swarmed into the mountains to join the fight against the Nazi oppressors. The ranks of the Andartes swelled to the hundreds. The savage civil war that was being fought between the Greek political factions in the area temporarily ceased, and a united front against the Germans was formed. There were approximately 1,500 enemy troops in the Evros region, but the new Andarte offensive against the German garrisons neutralized their offensive capabilities. Three hundred Germans were captured during subsequent operations, and the remainder were either killed or fled across the border for sanctuary in neutral Turkey.

All members of the Evros team were awarded the Bronze Star. Gunnery Sergeant Curtis also received a Silver Star for heroic service with OSS Special Operations in China.